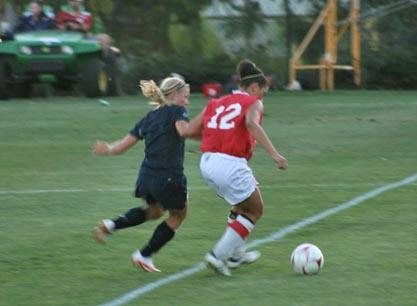 After the Blue squad had its moment one night before, it was the Red team’s time to be showcased Thursday when one half of the U.S. U14 Girls National camp took the field against a strong U16 Arsenal group. 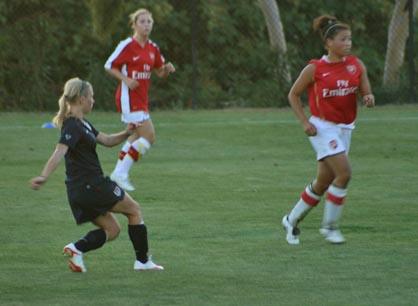 U.S. U14 GNT v Arsenal FC
With the 36-player roster broken up into two teams it gives both groups ample time to be evaluated while still feeling the closeness of being one unit.

This was evident as the girls were extremely vocal with one another, a positive and somewhat surprising sign considering this is everyone’s first camp together.

Speedy So Cal Blues striker Amber Munerlyn built on the U.S. team’s two first-half goals with one of her own early in the second half, a score that proved to be the difference in the team’s 3-2 victory.

Munerlyn was a part of strong second-half assault that saw her team dominate possession even though the girls only capitalized once.

Jenny Chiu joined her up top to start the half with Lauren Kaskie playing behind them in the center midfield. Kaskie, of Neusport FC, was one of the standouts. She has a fluidity to her game that’s rare for her age and is clearly a good athlete and strong passer.

It was hard not to notice Frannie Crouse, one of the quickest players on the field who has never seen a 1v1 scenario she doesn’t like. Crouse did set up a great scoring opportunity late with a pinpointed through ball in the box that was tugged just left of the post by one of her teammates.

Joanna Boyles and Rachel Hill played important minutes in the midfield and helped to keep the ball moving forward while in the back Kelly McCann and Shea Newman patrolled the centerback spots with Newman coming on late. Left back Gianna Dal Pozzo used her length to make a couple timely defensive stops and prevent a potential game-tying goal.

Both the Red and Blue groups will be back in action for the camp finale Saturday.