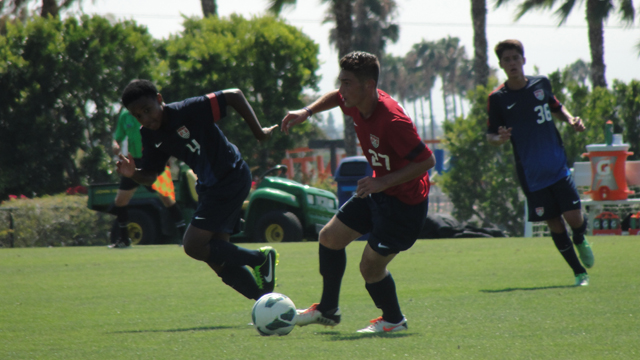 CARSON, Calif. – The 1998 age group concluded its final camp as the U15 Boys National Team on Saturday at the StubHub Center in Southern California. The group now progresses to the U17 Men’s National Team moniker, and the spotlight of the next squad for the youth World Cup cycle. 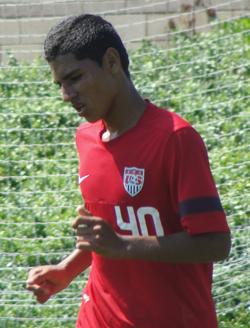 Although the name was the U15 BNT for camp, the U17 MNT coaching staff was in charge with head coach Richie Williams getting his first real look at the full group. On Saturday, Williams divided the 44-player camp into four teams for a pair of intersquad scrimmages.

“It was another two games that we were able to evaluate our players and see how they interact with the other players that we have here,” Williams told TopDrawerSoccer.com after the game. “It was another assessment for us to make better decisions on Residency and an upcoming trip to Mexico, where we will have a 20-man roster.”

The Mexico trip starts on August 7 for the players as they fly to Houston before heading farther south to Mexico City for a tournament that includes games against Brazil, Uruguay, and Panama.

“It is a good group. Those are all great soccer countries. It will be a great opportunity for our guys to get good international experience.”

Saturday’s scrimmages were the final chance for some to impress Williams and make it onto the roster, as invites have been sent out already.

On the day, Red was the lucky color over Blue. Red won the first game of the day 3-0 behind two goals from Classics Elite midfielder Devin Vegas. The Roja also claimed victory in the second game thanks to a pair of goals from Christian Pulisic.

The aforementioned Vega opened the scoring in the first game with two minutes left in the first half. Vega showed off some slick dribbling skills and tight control at speed when he slipped through the defense and then around the keeper before slotting it into the open net.

Eleven minutes into the second half, Vega doubled the lead. John Nelson provided the assist when he capitalized on a turnover and fed Vega at the top of the 18-yard box. The Texan tucked it away for his second of the game.

“I just try to find the ball and find the best places,” Vega told TopDrawerSoccer.com. “I was trying to impress the coaches because I want to go to Residency.”

Fernando Soria capped the scoring with a brilliant strike from 30 yards out that hit the upper corner of the net.

The Blue team had one good chance to get on the board when Weston McKennie fed Sean Teixeira for a breakaway, but LA Galaxy Academy goalkeeper Eric Lopez came up big with the save. Lopez was a late addition to the roster after an injury to Abraham Romero early in the week kept him on the sidelines.

* Tanner Dieterich was injured during the pregame warm-ups and he was replaced in the lineup by team coordinator Bryan Irwin. Williams said that the injuries were minor strains.

Matthew Olosunde ran like a gazelle down the right flank before tucking the ball away into the corner of the net for the opening tally for the Blue squad after only seven minutes, but a couple of injuries and some quality finishes turned the tide in the second half and Red rolled to another win.

Olosunde’s goal was one of the few noteworthy moments of the first half, as the teams battled in a relatively physical contest. Blue, while holding the lead at the break, was dealt two blows with injuries to starter midfielders Christian Albelo (hip flexos) and Ronaldo Escudero.

Red took control of the game in the second half thanks to Eric Calvillo’s dominance in the center of the field and his quality finish six minutes into the latter stanza.

“I saw the keeper come out to punch the ball, so I immediately knew I had to put it in the right side,” Calvillo told TopDrawerSoccer.com. “I like those finesse shots so I put it in the top right. I’ve been practicing those shots, and it was a good shot.”

Christian Pulisic scored the game-winner only three minutes later when he tapped in a rebound following a shot by Lagos Kunga.

Pulisic added an insurance goal late when he was taken down in the box and converted the penalty kick.