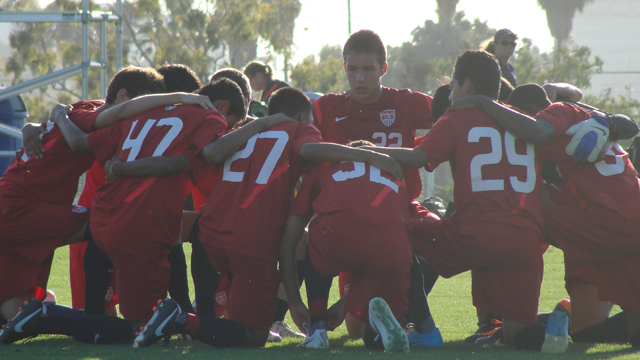 CARSON, Calif. – The U.S. U15 Boys National Team played two scrimmages on Thursday, and while the results were noticeably different, the games were eerily similar.

In the first game of the night, the U15 BNT topped Arsenal FC U16, a Southern California Academy team, 4-0 behind goals from Joe Gallardo (Nomads), Christian Pulisic (PA Classics), and Christian Lucatero (Houston Dynamo). 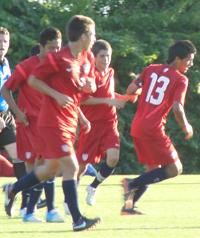 Both games started in a similar fashion with the opponents trying to press the U.S. high to create turnovers by the defense. The youth national team was slow out of the gate in both incidences but responded well to notch a pair of victories on the night.

Joe Gallardo has a job to do and that is score goals. Lately, nothing has stopped the star of the Nomads Academy from doing that job.

The San Diego-native is on a torrid scoring pace at youth national team level and he added to the tally on Thursday with two more strikes, which brought his total to three in two games at this camp.

The Nomads’ striker opened his account in the ninth minute when midfielder Christian Pulisic dished him the ball in the box. Gallardo cut to his off-foot and roofed his shot over the keeper and into the net, which gave the U.S. a 2-0 lead.

Pulisic scored in the sixth minute off a rebound to open the scoring on the day.

Gallardo extended the U.S. lead in the second half when Chivas USA’s Jorge Ruiz torched his mark with a brilliant first touch before hitting a cross into Gallardo for the easy finish.

Ruiz, playing on the right wing, flicked a lazy pass over his shoulder and around his defender. The Chivas USA starlet then dipped his torso around the outside back and sprinted toward the touchline with the ball.

His cross found the foot of Gallardo, who did not disappoint with a classy finish to push the lead to 3-0.

Houston Dynamo’s Christian Lucatero capped the scoring with an olimpico, a goal directly off a corner kick, midway through the latter half. Lucatero’s corner was perfectly placed into the far corner, but to the goalkeeper’s credit, the lights at the Home Depot Center had not turned on yet and it was easy to lose the flight of the ball in the dim light of dusk.

The result was not always comfortable for the U.S. though. Arsenal came out quickly and looked like the stronger side in the opening moments with a couple of good looks on net, but nothing materialized.

“It was nice to play two teams that try to press,” U15 BNT head coach Tony Lepore told TopDrawerSoccer.com after the game. “Both teams gave us some challenges with that. It was a good learning experience for our guys. I think in both games, not a great start, but good adjustments and solving problems as a group.”

It did not take long for the U.S. to solve the high pressure and found ways to quickly breakdown the Arsenal defense, which is preparing for the start of Development Academy play.

Lepore’s group showed good composure in its ability to withstand the early onslaught and settle into the game. Pulisic’s offensive contributions (a goal and an assist in the opening ten minutes) obviously went a long way in making the defense more comfortable with an early lead.

Sean Wilson started the game at center back, but moved to defensive midfield in the second half. Wilson’s altheticism is off the charts, but his distribution on the night was lackluster. He struggled to get the ball off his feet at times.

The U.S. held Arsenal to zero shots on goal in the second half, so it was a quiet evening for Justin Vom Steeg in net.

LA Galaxy scored twice in the opening eight minutes and the U15 BNT was on the ropes early. The youth national team avoided the knockout blow, and stayed in the game before a late rush of goals helped the youngsters claim an exciting 3-2 victory.

“The guys should be really proud of their character for how they never gave up,” Lepore said. “Evaluating their character is an important part of this process too. It was a positive night.”

The players, obviously, were also upbeat about the finish.

“It was a great win,” U15 BNT midfielder Kyle Scott, who had an assist, told TopDrawerSoccer.com. “We all feel good. Did well individually and the team played well too.”

LA Galaxy’s Steve Martinez opened the scoring with an ambitious strike from 25 yards out. The target forward brought the ball down with his left foot and then curled in a shot to the upper corner of the net that left the U.S. goalkeeper helpless.

Galaxy doubled the lead minutes later when winger Juan Orozco beat the BNT outside back along the end line and drilled a cross into the center of the box. Fellow winger Hugo Gutierrez was there to direct the ball into the net.

The Galaxy could not find a third goal and let the U.S. hang around for the rest of the half. With a Development Academy game on Saturday, Galaxy made wholesale changes at half time to rest some players for the upcoming league game.

The changes shifted the tide in the U.S.’s favor, and the youth national team took firm control of the contest after the break.

Chivas USA winger Joshua Perez absolutely demolished the right side of the Galaxy defense with a number of smashing runs at defenders.

After numerous blocked crosses, Perez cut inside for a lay off to striker Christian Ramirez (FC Dallas). One of the Galaxy defenders chopped Ramirez down, and the referee awarded a penalty kick.

Captain Cameron Lindley (Indiana United Fire) stepped up and grabbed the ball to take the spot kick. Lindley looked confident in his attempt, but the Galaxy keeper read him well and blocked the effort with a one-handed save.

The U.S. would crack the seal with nine minutes left in the game when Scott delivered a perfect cross to Malcolm Dixon (New York Red Bulls). Dixon directed his header to the inside of the far post for the opening goal.

With the clock winding down, Perez took over the game. The winger got behind the defense and ripped a shot from the corner of the box into the bottom of the far post for the game-tying goal.

Moments later, Ramirez grabbed the winner when he tried his luck from distance and was fortuitously rewarded with a favorable bounce that wrong-footed the keeper and skipped into the net.

Marcinkowski made a great save early in the second half to keep the score at 0-2. The diving effort proved to be the difference between a draw and victory at the end of 80 minutes.

Obinwa is a center midfield converted into a center back. Thursday’s scrimmage was one of the first games where the U.S. coaching staff had a good look at him in that position. The reviews were mixed as Obinwa showed some good parts to his game, but struggled with the details that go into the defensive position.

The U15 BNT ends camp with an intrasquad scrimmage on Friday. This is the last camp for this age cycle. The new U15 age group will have its first camp in October.