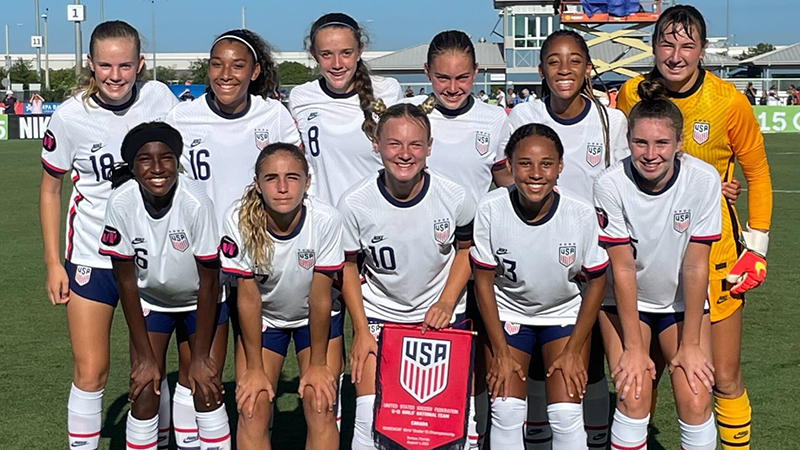 Facing its most difficult test to date at the Concacaf Championship, the U.S. Under-15 GNT won a third straight game, besting Canada by a 1-0 score. With a third win in three group games, the U.S. finished in first place in Group B of League A, advancing to Friday’s semifinal.

Kennedy Fuller tallied the eventual winner in the 17th minute, as the Solar midfielder’s first half strike was the only goal of the game. Her headed finish from an excellent cross provided an early lead, and the U.S. was able to control proceedings throughout the rest the game.

SLSG forward Alexandra Pfeiffer flashed wide early in the game, while right back Mya Brandon created plenty of problems going forward. After nearly setting up Carrie Helfrich in the first half, she played a key role in the lone U.S. goal of the game. Wriggling free from a Canadian defender, Brandon picked out a wide-open Fuller just inside the six-yard box.

Ascanio nearly made it a second, shooting just wide late in the first half. Helfrich poked just wide shortly after the halftime break, almost capitalizing on a bad Canadian back pass. For the most part, Canada defended well for long stretches of the second half, denying the U.S. chances to extend the lead. Goalkeeper Noelle Henning was extremely solid as well, even without having to make any spectacular saves.

The Canadian attack did have moments going forward. But any momentum was usually snuffed out before reaching the penalty area, as Kai Price Jordyn Hardeman were alert and left goalkeeper Molly Vapensky with little to do.

A second U.S. goal was waived off due to an offside flag, but the one-goal lead was enough. Next up for the United States is Friday’s semifinal against the Dominican Republic.