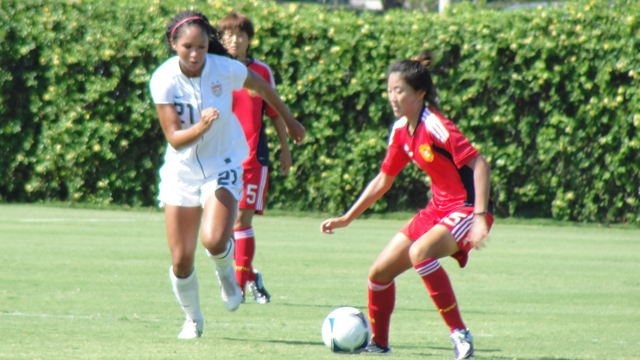 It has been a long time coming for the U.S. U17 Women’s National Team, but now history is in sight.

The grueling camps in the Chula Vista heat, the long flights to Europe for friendlies, the hours upon hours spent refining and perfecting on the practice fields just make up a small slice of the journey for these young women.

On Saturday, the U17 WNT wrapped up its final camp before the 2012 U17 Women’s World Cup, which kicks off on September 22. The camp concluded on a high with a 5-1 thrashing on China PR, which is also headed to the World Cup. 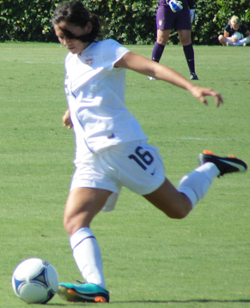 “China is actually one of the top teams that I have seen this year,” U17 WNT head coach Albertin Montoya told TopDrawerSoccer.com. “They are in a residency setting where they train six days a week, so they are a very strong side.”

Over the past week, Montoya and his staff had been slightly altering the game plan for his side in preparation for the World Cup, specifically for a certain game in Azerbaijan, where the World Cup will be held.

The head coach said that he had given new instructions in defensive responsibility for the midfielders prior to Wednesday’s game. It did not really work though until Saturday.

“When we play a side like China, Japan, or North Korea, we are going to concede some possession,” Montoya continued. “But we are using our strengths [to overcome that] with our speed and a little bit of possession to get in behind the defense.”

“North Korea and them play very similar in the way they play through the midfield. They’re good teams. We pressed them high, and plan to play the same way against North Korea.”

The preparation against China goes beyond duplicating the North Korea game, and more importantly into finding a replacement for center midfielder Sarah Robinson, who will miss the World Cup due to a medical issue according to Montoya.

“Sarah won’t be there, and that is unfortunate, but we want to wish her the best and hope she is healthy soon,” Montoya, who is also her club coach, added. “It is a big loss for us because she covers a lot of ground and the girls enjoy having her on the field because she does more running than anyone out there.”

Robinson, the cross-country star, started four of the five games at the 2011 CONCACAF Women’s U17 Championship. She played 248 of the 270 minutes from the three pool play matches.

The coach is not trying to downplay the impact of Robinson’s absence, but he does believe that this camp helped find the replacement.

Defensively, the U.S. is dealing with another injury, as regular starting goalkeeper Jane Campbell is battling from a knee injury.

“Cassie [Miller] has been outstanding for us [in Campbell’s absence], and I have always said that I believe we have two of the best goalkeepers in the world, but Jane is expected to return and be healthy [and ready to play] in a week or two.”

Campbell was a part of training during the camp, but did not see any game action against China.

Nicked and battered, the U17 WNT still enters the World Cup as one of the favorites. Montoya has tried to downplay that position with credit to many of the teams in their group, but it is hard to overlook the talent and depth on the U.S. team especially when the attack is clicking.

The months of preparation are finally coming to an end for the coaching staff and team with only a few weeks left before they depart for the nation by the Caspian Sea and try to win the first U17 World Cup in U.S. Soccer history.

The 21-player roster for the World Cup will be announced before Wednesday. The players have already been notified.

ESPN is set to broadcast the U17 World Cup in a similar fashion as the U20 World Cup, which is going on now, according to Montoya.