U.S. U17 WNT headed to Argentina 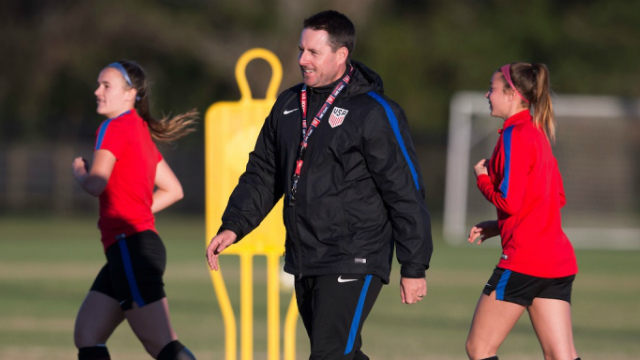 The U.S. Under-17 Women’s National Team will make its first international trip of the year when it travels to Mar del Plata, Argentina from Feb. 7-19 for a training camp and three excellent matches as part of the Copa Provincia de Buenos Aires tournament.

The USA will face Chile (Feb. 13), 2017 FIFA U-17 Women’s World Cup host Uruguay (Feb. 15) and Argentina (Feb. 17) as the young Americans continue preparations for the 2018 CONCACAF Women’s U-17 Championship in April. All the games will be played at Estadio José María Minella in Mar del Plata.

The three South American teams, some of the strongest on the continent for women’s soccer outside of Brazil, are also preparing for their World Cup qualifying tournament. All three will participate in the 2018 South American Under-17 Women's Football Championship being held in March in Argentina. As host, Uruguay has an automatic berth, meaning only the top two finishers at that tournament will earn berths to the World Cup.

“What a great trip this will be for our players,” said Carr. “The opportunity to travel to South America, experience the overall environment there and play three talented teams has so many positives for this team’s continued development. This will no doubt be some of the best preparation for qualifying that we could get.”

U.S. head coach Mark Carr has called up 22 players for the trip, almost all of whom saw extensive action with the squad during the first year of this cycle in 2017. Sixteen of the players come from U.S. Soccer Girls’ Development Academy clubs.

Eleven players on the roster are in double-figures in caps already in their U-17 careers, led by defender Kate Wiesner (25), defender Kennedy Wesley (23) and forward Jordan Canniff (20). All three were a part of the previous cycle and played at the 2016 FIFA U-17 Women’s World Cup in Jordan.

Canniff leads the group in international goals with nine while Maya Doms, Croix Bethune and Sunshine Fontes have six each. Isabella D'Aquila has five.

The USA will participate in the 2018 CONCACAF Women’s Under-17 Championship being held in Nicaragua from April 19-29. The Americans, seeded atop Group B as reigning regional champs, will face Costa Rica, Bermuda and Canada in the tournament that will qualify three teams to the 2018 FIFA U-17 Women’s World Cup.