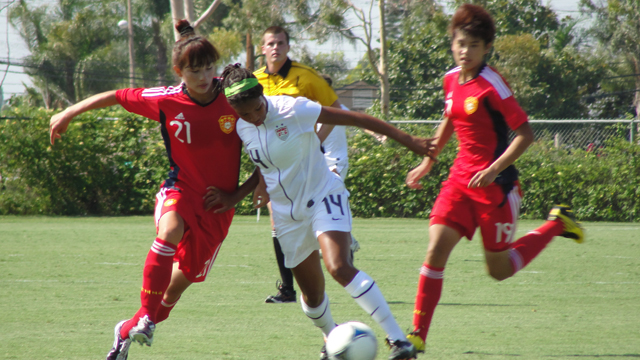 CARSON, Calif. – The final score was 2-1 in favor of the U.S. U17 Women’s National Team over China U17 WNT on Wednesday during a pre-World Cup friendly at the Home Depot Center, but the result was hardly indicative of the play.

The U.S. used great substitute performances from Toni Payne (Concorde Fire), Amber Munerlyn (So Cal Blues), Elizabeth Raben (Colorado Rush), and Lauren Kaskie (Heat FC) to help overcome a borderline disastrous start to the game and kickoff the final camp before the FIFA U17 World Cup with a win. 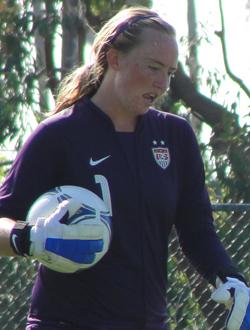 China was on the board first in the 43rd minute when a careless giveaway in the midfield following a goal kick resulted in a 1v1 opportunity for the Chinese striker against the U.S. goalkeeper.

Carissa Miller (Sereno FC), who has assumed the #1 spot in net with Jane Campbell returning from injury, was off her line quickly, but she had no chance against the composed finish.

Head coach Albertin Montoya ripped into the group at halftime after an opening stanza that could most adequately be defined as pitiable.

“Oh, definitely. I don’t think he has gotten into us that bad [before],” midfielder Andi Sullivan told TopDrawerSoccer.com with a laugh after the game. “It wasn’t something unjust though. We did not play very well in the first half. It is good to see we can take a hard criticism at half and come out stronger.”

The U.S. bounced back in the 2nd half with half time substitutes Payne and Kaskie pulling the strings in the attacking midfield roles.

“We did not defend as a unit and that affected some of our 1st half play, and I thought we should bring a physical element to it,” Kaskie told TopDrawerSoccer.com about what she brought to the contest that changed the complexion of the game.

Kaskie was the facilitator for the game-tying goal with a sublime diagonal pass behind China’s defense and into the run of Payne.

“I saw Toni (Payne) making the run, so I popped off my player and hit her on the run,” Kaskie said.

Payne finished into the upper corner in the 58th minute to bring the teams back on level terms.

While the U.S. held better possession in the 2nd half, China still had more shots. However, China was impatient in the attacking third and all too often tried to beat Miller from distance, which was very unlikely to happen.

The U.S. made the visitors pay for their wastefulness in the 80th minute when a multiple pass movement out of the defensive third eventually led to Summer Green (North Carolina/Michigan Hawks) feeding Munerlyn for a 1v1 situation with the last defender.

Munerlyn, surely one of the fastest players in the world at this age, was a step ahead of the defender within yards. The speedster appeared to be heading to the endline to whip in a cross to Emily Bruder (Utah Avalanche), but one of China’s center backs kicked her heel and conceded a penalty kick.

Green stepped up and put the spot kick away to give the U.S. a 2-1 advantage with less than 10 minutes left in the game.

The win will look nice in the buildup to the World Cup, but the coaching staff will be more concerned with how lackluster the squad looked to start the game.

“In the 1st half, we started a little lethargic and were reactive,” Sullivan said. “We were constantly defending and doing unnecessary work [because we couldn’t hold possession].”

The U.S. only managed one shot on goal in the opening half and that did not come until the 40th minute when Midge Purce crossed to an open Green on the far post, but the Tar Heel hit her shot right at the keeper.

Comparatively, China finished the half with four shots on goal and nine shots overall. The U.S. kept it close due to good play out of Miller in the net and a lazy forward from China who drifted offside over five times in the game.

The friendly was held under FIFA rules, so the four substitutes by Montoya at the intermission used up over half of the allotted six, but the changes made an immediate difference in the quality of play for the U.S.

Kaskie and Payne stepped up the intensity and started to win the ball back in dangerous spots on the field. Raben offered a physical presence to match up against China’s lone striker. And Munerlyn was constantly creating goal-scoring opportunities with her pace.

Neither Kaskie nor Sullivan chalked it up to fatigue for the lazy start from the U.S. Both similarly cited the closeness of the World Cup, which kicks off next month in Azerbaijan, for the main objective on everyone’s mind at this camp.

China’s center midfielder (#20) outplayed her U.S. counterparts with ease in the 1st half. She was smooth on the ball and smart with knocking her oppontents off balance. It was a humbling experience for the normally dominant U.S. trio.

Andi Sullivan was moved from attacking mid to defensive mid toward the end of the 1st half. Sullivan settled the game somewhat with her distribution.

The U.S. starts World Cup play on September 22 against France in Group B. China kicks off on September 23 against Uruguay. Assuming both teams advance from their groups, they would not meet until the semifinal round.