It wasn’t just that they won the tournament; it was the swagger they showed in doing it.

It was their speed and aggressive early attacking. It was the fact that they hit first … and second, and third for that matter.

Make no mistake, the way the U.S. U17 Men’s National Team took apart Brazil on Sunday to capture the Nike International Friendlies for the first time ever, was almost … un-American.

“We didn't come out like a typical U.S. side - defending and counter-attacking,” said U17 striker Corey Baird. “We came out taking it to Brazil and attacking them. I think Brazil underestimated us.” 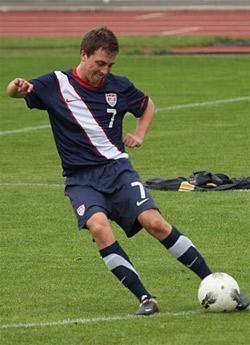 Corey Baird
No, I think we all did.

No one saw them rocking Brazil 3-1. Especially after fortuitous ties against France and Turkey in the opening matches.

But they did. And in doing so the U.S. side showed off some of its dynamic talent.

You have to start that discussion with midfielder Junior Flores, who was named the Man of the Match against the Brazilians and was clearly the team’s pulse during the tourney.

Then there’s midfielder Rubio Rubin, who not only netted the team’s opening goal in the championship match but embodied the confidence that makes this group a little different.

“We knew we could beat any team out there,” he said. “We didn’t worry about them, we only concentrated on what we could do. We’re a team that can compete with anyone at the highest level and we’re progressing in our development.”

Well, the results don’t debunk what the kid is saying. But results can be random. So maybe the most important aspect we can take away from the tournament is the character the team showed.

The way they twice erased deficits in the final minutes to earn ties in their first matches, and the way they puffed out their chests at Brazil and handled business.

In the end, maybe one great week won’t portend much for the U17s. But at the moment, it is pretty meaningful for them.

“It says that the U.S. isn't just an average team anymore,” Baird. “It shows how much soccer has grown in the U.S. and that we can get results against top teams.”