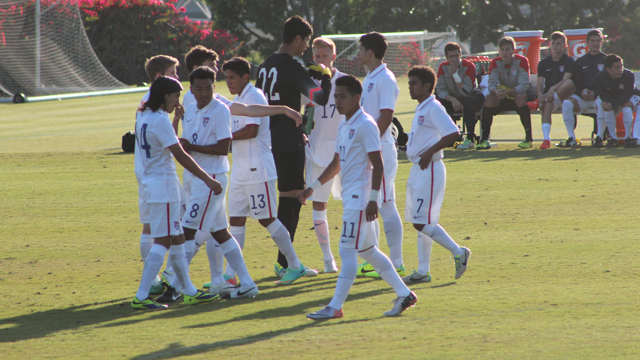 CARSON, Calif. – There was a one and a two, but there definitely should have been a three.

The U.S. U18 Men’s National defeated Canada 2-1 on Tuesday night at the National Training Center, which marked the first full international game for this U18 cycle with only players born in 1997. New Real Salt Lake Homegrown signee Justen Glad scored the opener and FC Dallas Academy forward Coy Craft netted the game-winner.

The home side came away with the win and the two goals but it felt like it should have been more on the evening as Canada’s goalkeeper Marvis Kreitling made save after save to keep the friendly neighbors in the contest.

Kreitling jumped into action early with a kick save in the ninth minute. LA Galaxy Academy forward supplied a golden chance for Craft who ripped a shot on net, but the keeper met the challenge and kicked the ball away for a corner kick.

The U.S. continued to turn up the pressure in search of an early opener. Ruiz received a splendid pass from Mukwelle Akale near the corner of the 18-yard box on the far right side. Ruiz took a touch and hit a low shot toward the far post, but again Kreitling’s boot kept the ball out of the net.

U.S. did get the break through 11 minutes later when Justen Glad finished off a corner kick from David Chavez. The initial delivery was slightly low, but Craft flicked the ball on at the near post and Glad, who lost his mark, had the easy header at the far post to give the U.S. the lead.

The U.S. closed out the half in search of a second goal. Akale had the closest chance after a quick interchange with Jackson Yueill in the center of the field 30 yards from goal, the diminutive attacking midfielder ripped a left-footed effort that smacked off the post and into the path of Ruiz, but the LA Galaxy Academy player was whistled for being in an offside position.

A minute later, Craft had the closest chance when he broke free of the defense inside 10 yards from goal, but Kreitling swallowed the shot into his body and did not allow a rebound.

Canada tried to pull a rabbit out of the hat in the dying seconds of the half with a quick attack down the right side, but Chavez was in the right place at the right time as he made a clean block on a shot from six yards out.

The start of the second half saw Real Salt Lake Academy’s Sebastian Saucedo take control of the game. Saucedo, also referred to as Bofo, broke free down the left side in the 50th minute. He cut into the center and then slipped in a pass to Ruiz who one-timed his shot on goal. Kreitling tipped the ball just enough to push it into the crossbar.

Ruiz was in the mix minutes later when he worked a combination with Akale before the Thunder Academy player slipped the ball back to Craft. The target forward drilled his shot at the keeper who made a great initial save and followed it up with an even better save on the rebound.

Craft earned his goal on the night in the 58th minute when Ruiz slipped him in behind the defense and he smashed his shot into the lower corner of the net to give the U.S. a 2-0 lead.

It took 22 minutes, but Canada pulled one back thanks to a terrific shot from Emmanuel Zambazis and the boys in red had some fight left in them for the final 10 minutes.

The U.S. nimbly evaded any other chances and saw out the game to the final whistle with hardly any other incident except for another Kreitling save. This time, it was Saucedo who was denied. The crafty winger placed a free kick into the upper corner of the net but a sprawling save from the goalkeeper kept it surprisingly out of the net.

Canada returns to the field on Thursday with a game against Mexico while the U.S. will play Mexico on Saturday.