U.S. U20 MNT set record in romp over USVI 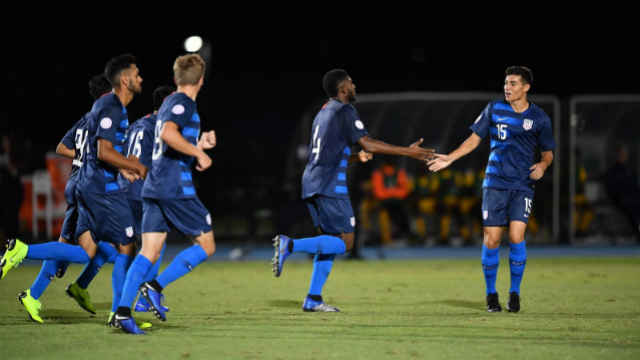 The U.S. Under-20 Men's National Team set a new team record for scoring at the Concacaf U-20 Championship, defeating U.S. Virgin Islands 13-0 to send claim top spot in Group A after its second match of the confederation's qualifying tournament for the 2019 FIFA U-20 World Cup. Ulysses Llanez tallied a hat trick and three more assists all in the first half, while a total of nine different goal scorers found the back of the net to send the USA on to its record-setting victory.

Llanez's dazzling first half began early when his cross from the left picked out Griff Dorsey at the back post for the opening goal in the fourth minute. Llanez added another assist in the 20th, finding Ayo Akinola who headed home from close range.

With two helpers in hand, Llanez went about collecting his hat trick. In the 23rd minute, Dorsey cut inside and laid off the ball, allowing Llanez time and space to curl a beautiful right-footed effort inside the top right corner. On the half-hour mark, Manny Perez progressed down the right, providing Llanez with an open lane to goal and a clean finish past Connor Querrard. In the 39th minute, he battled off the challenge form Jett Blaschka to complete his hat trick.

In the 41st minute the Lynwood, Calif., product brought down the curtain on an impressive first half, playing a quick combination with Anthony Fontana who finished past Querrard to send the USA into the locker room with a 6-0 lead.

Llanez was replaced by Justin Rennicks at halftime and the Indiana University product picked up the production, playing a part in a four-goal outburst over the course of seven minutes.

It began in the 62nd, when he nodded home a close-range rebound after Querrard saved a powerful shot from Dorsey. One minute later, he faintly flicked on an Alex Mendez cross before Mark McKenzie finished. Rennicks again put his name on the scoresheet, slotting home Mendez's low free kick from the right in the 66th minute, before playing the pass to send Paxton Pomykal on a great run through the U.S. Virgin Islands' back line three minutes later. Pomykal's goal gave the USA a 10-0 lead, setting a new team record for goals in one match at the Concacaf U-20 Championship. The previous mark was a 9-0 win against Dominican Republic in 1975.

The USA would extend the record in the closing minutes. Mendez put home a 78th minute penalty kick and McKenzie finished his second chance of the match three minutes later. Manny Perez also put his name on the score sheet with a nice individual effort in second-half stoppage time to cap the scoring at 13-0.

Up Next: The U-20 MNT faces its toughest first-round test, taking on Trinidad & Tobago on Monday, Nov. 5. The battle of two of Group A's undefeated sides kicks off from IMG Academy Stadium in Bradenton, Fla. at 7:45 p.m. ET.

Goal Scoring Rundown:
USA - Griff Dorsey (Ulysses Llanez), 4th minute: It didn't take the USA long to get on the board. Building out of the back, Mark McKenzie fed Matt Real up the left, before slipping Llanez towards the box. He swung a cross in looking for Akinola, but it fell instead for Dorsey who slammed home his effort at the back post. USA 1, VIR 0

USA - Ayo Akinola (Ulysses Llanez), 20th minute: After coming close a few times, the USA found he second goal via another well-worked play. Real lobbed a ball over the top to find Llanez in space down the left. Taking it in stride, he centered for Akinola who finished from close range. USA 2, VIR 0

USA - Ulysses Llanez (Griff Dorsey), 23rd minute: After providing two assists, Llanez got his name on the score sheet. Returning the favor from his fourth minute goal, Dorsey cut inside and laid off for Llanez just outside the area, before the attacker curled a beautiful right-footed effort into the top right corner. USA 3, VIR 0

USA - Ulysses Llanez (Manny Perez), 30th minute: After finding success working up the left flank, the fourth USA goal came from the right. Catching the U.S. Virgin Islands in transition, Manny Perez worked his way down the flank to slip Llanez into the box, blasting a tight angled, right-footed effort past Querrard for his second of the match. USA 4, VIR 0

USA - Ulysses Llanez (Julian Araujo), 39th minute: Llanez grabbed his hat trick before halftime. Chasing down a ball over the top from Araujo, Llanez fought off Jett Blaschka in the area before finishing past Querrard. USA 5, VIR 0

USA - Anthony Fontana (Ulysses Llanez), 41st minute: After moving the ball around the box, the U.S. settled as Llanez played a quick combination with Fontana at the top of the area. The Philadelphia Union product pushed past a defender before hitting home his first of the tournament. USA 6, VIR 0

USA - Justin Rennicks, 62nd minute: Having replaced Llanez at the break, Justin Rennicks drew on his scoring touch in the second half. Slotted into the box on the right by Alex Mendez, Dorsey's quick shot was saved by Querrard, but the rebound deflected straight to Rennicks, who headed home his second of the tournament from close range. USA 7, VIR 0

USA - Paxton Pomykal (Justin Rennicks), 69th minute: After a scramble outside the area, Paxton Pomykal worked his way through four defenders before slotting home a low blast. The USA's 10th goal fo the match marked a new team record for scoring at the CONCACAF U-20 Championship. USA 10, VIR 0

USA - Alex Mendez (penalty kick), 78th minute: After Dorsey was hauled down in the area, Mendez stepped up and slotted his spot kick in the lower right corner. USA 11, VIR 0

USA - Mark McKenzie, 81st minute: A corner kick from the right was nodded towards goal by Matt Real, but saved by Querrard. In the ensuing scramble, McKenzie and Real swung at the ball, but it was McKenzie who collected his second of the match from close range. USA 12, VIR 0

Key Saves and Defensive Stops
VIR - Connor Querrard, 6th minute :Following a free kick, Mark McKenzie dug the ball out at the top of the area and laid back for Llanez whose one-time effort was pushed around the bar thanks to a diving save from Querrard.

VIR - Connor Querrard, 15th minute :Anthony Fontana centered a cross for Ayo Akinola whose close-range header was acrobatically pushed away by Querrard and then cleared.