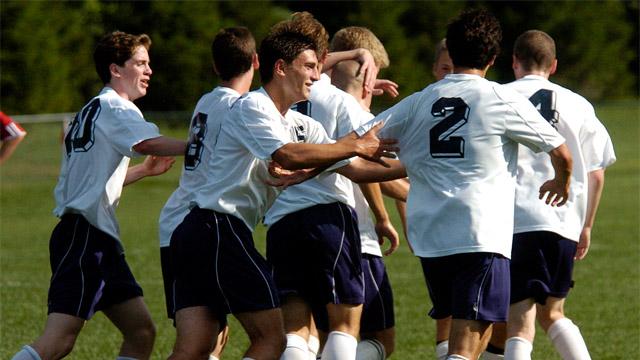 Here is the Players To Watch Team of the Month in August for the New Jersey region.

Caroline Chagares, PDA Slammers, U15, Midfielder: Caroline was named Golden Ball Winner and member of the “Best 11” at the US Youth Soccer National Championships in July. It’s the second time on the “Team of the Month – New Jersey” for this composed and highly intelligent midfielder who drives PDA’s spectacular possession game. 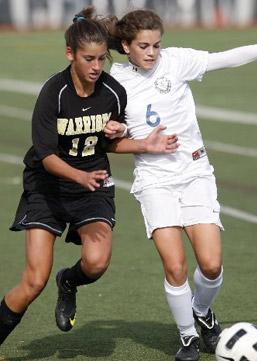 Rachel Corboz (right)
Rachel Corboz, PDA Slammers, U15, Midfielder: Rachel was named to the “Best 11” at the US Youth Soccer National Championships in July. It’s Rachel Corboz’ first time on the “Team of the Month” and it certainly won’t be her last given her dominating performance in the midfield during the US Youth Soccer National Championships. She and PDA midfielder Caroline Chagares orchestrated a beautiful midfield keeping their PDA’s play under control and in possession.

Alexis DellaPietro, Match Fit Chelsea Beat, U15, Forward: Alexis was named to the “Best 11” at the US Youth Soccer National Championships in July. “Lexi” was one of the big reasons the Match Fit Chelsea Beat made it to Phoenix at the USYSA National Championships. Lexi impacted every game with her ability to break entire defenses down on her own. Her ability to take on players combined with her pace allowed her to score many big goals and create opportunities for others.

Shannon Burns, NJ Crush Dynamite, U13, Defender: Shannon, a strong attack minded central defender helped the NJ Crush Dynamite to win the MAPS Cup over arch rivals NJSA Blast and The National Cup Region B tournament over NJSA Fusion. Carrying the ball out from the back Shannon is a very difficult player to defend and her delivery from set pieces are a constant problem to each and every opposition

Sophia Gulati, NJ Crush Dynamite, U13, Midfielder: Sophia is a typical box to box midfielder that can do it all. Sophia always makes herself available for the ball and rarely wastes possession. Arriving late in the box, Sophia has made a habit of creating opportunities and helped the team to back to back tournament wins at MAPS Cup and National Cup Region B.

Samantha Rosette, NJ Crush Dynamite, U13, Forward: Samantha has scored nine goals in nine games at each of the Crush’s last two tournament wins. A very skillful and intelligent player, Sam’s work rate off the ball to get open and drag defenders around makes her very difficult to mark. Scoring the opening goals in each of the two final games against NJSA Blast at the MAPS Cup with a beautiful first time volley and then again at the National Cup Region B tournament with a superb long range shot in the upper corner from distance.

Penelope Edmonds, Match Fit Colchesters, U14, Goalkeeper: Penelope is a goalkeeper that stands above her peers in many ways. Her handling, technique and footwork are of a very high level and she can win a team games as much as keep them in games. A US and Australian National Pool player, Penelope was most recently the stand out goalkeeper at the USYSA National Finals in Arizona where she caught the eye with three fantastic performances.

Julia Ashley, Match Fit Colchesters, U14, Defender: Julia is a center back by trade, converted to an attacking right fullback. She has size, speed and most importantly skill and loves to attack at every opportunity. Her crossing and shooting make her a threat in every game but she is also a defender that can keep the opposition’s best player quiet. She recently made the 'best 11' at the USYSA National Finals.

Gabrielle Martone, Match Fit Colchesters, U14, Central Midfielder: Gabby is the quiet unsung hero of the team. She plays either a holding role deep in midfield or as cover at the back and organizes all that goes in front of her. Sharp in the tackle, fearless in every aspect and good on the ball she breaks up a lot of the opposition play and starts the counter quickly. Having suffered a tough year with injuries, Gabby shone on the biggest stage at Nationals and will be a very strong presence in the Colchesters midfield for the next few years.

Alexa Bergy, South Jersey Elite Barons, U17, Forward: Alexa and the SJEB U17 girls finished their season by winning the Diamond Division of the MSSL/NSCAA Summer Showcase at Fort Dix, New Jersey. The Championship final was decided when Alexa battled her way through a two defenders and the keeper to score a cheeky tap in.

Miles Hackett, SDFC Gauchos, U15, Forward: Although the SDFC Gaucho’s didn’t make it out of group play at the US Youth Soccer Championships this July, one of their forwards, Miles Hackett, a two time “Team of the Month – New Jersey” nominee was named to the “Best 11” at the US Youth Soccer National Championships in July. Miles Hackett was part of the Gaucho’s high powered offense that turned in an impressive 22 goals for and 2 against during the Gaucho’s New Jersey State Cup and four during their march to the Region I Championship.

Troy Carrington Jr., SDFC Gauchos, U15, Forward: Troy made the most of tough competition for the SDFC Gauchos at the US Youth Soccer National Championships in July. Troy built upon his four goals during the Gaucho’s run to the Region I Championship by leading the scoring for the U15 group at Nationals by posting three of the Gaucho’s six goals.

Harrison Steadman, SDFC Gauchos, U15, Forward: Harrison, another of the Gaucho’s extremely productive forwards provided four goals during the Region I event. He made his presence known during the US Youth Soccer National Championships this July posting two goals during the event including the game winner against the Region IV Champions San Diego Surf.

Wesley Reyes, UFA Soccer Association NJ Strikers, U15, Midfielder: Attacking midfielder Wesley Reyes is the ‘complete’ player. He is an exceptional distributor of the ball, possesses spectacular foot skill, speed and a ‘Messi-like’ finesse with the ball, and he can strike from close range or distance. Wesley’s outstanding season was capped by great performances at the US Club Regional event where the Championship finalist Strikers scored 12 goals.

Peter Hall, UFA Soccer Association NJ Strikers, U15, Forward: Peter, a regular at Region I ODP events, is often referred to as one of the region’s most exciting forwards in his age group. Always marked by the best defenders, Peter has become an expert in winning 1v1 situations and wowing the crowd with his dazzling foot skills, creativity and explosive speed going to goal.

Randy Gonzalez, UFA Soccer Association NJ Strikers, U15, Defender: The Strikers are known for their high powered offense, but the defense cannot be overlooked. Sweeper Randy Gonzales is the most versatile of the Strikers defense. He is strong, physical and can be counted on to cover the best of the opposing offenses as well bring the ball out of the back to initiate the attack. Randy and the Striker’s defensive unit allowed only two goals during the US Club Regional event.

Bobby Cartas, Marlboro Soccer Association Lightning Blue, U17, Forward/Midfielder: Bobby, an explosive and versatile athlete who’s can play the role of playmaker of goal scorer, had an outstanding season 2010-2011 for his Marlboro SA squad. A highlight was his performance against 2010 US Youth Soccer National Champions Slammers FC. Bobby has verbally committed to University of Massachusetts.

Aaron Hart, Marlboro Soccer Association Lightning Blue, U17, Defender: This 6’5” defender is a leader and dominant force for the Lightning’s back line. In addition to being an imposing threat to opposing offensive players, this defender can tear it up offensively. This season he provided 11 goals from the air for the Lightning. In addition to being an outstanding athlete, Aaron is also an outstanding student posting a 4.2 GPA and 2100 SAT’s. He has the attention of programs such as St. Joseph’s (PA), West Virginia, and William Patterson (NJ) among others.

Mike LaRose, Marlboro Soccer Association Lightning Blue, U17, Defender: Mike, a right back, is a fast and physical presence in the back for the Marlboro SA Lightning Blue squad. Mike excels at containing and dispossessing the opposing offensive and he can be counted on to tear up the right flank to initiate the Lightning’s offensive attack. Mike has the attention of great college programs such as Rutgers and West Virginia.

Wojciech Kochan, Marlboro Soccer Association Lightning Blue, U17, Goalkeeper: This calm and composed New Jersey keeper came out of practically nowhere to grab the attention of youth and college coaches. A ‘hidden talent’ no more, the fearless Wojciech displays an icy determination between the posts that is well beyond his years. He provided his Marlboro squad with several key shutouts and highlight reel saves during the 2010-2011season.

Alexander Lazzaro, Marlboro Soccer Association Lightning Blue, U17, Defender/Midfielder: Alex, who covers both the center defensive midfield and stopper positions for the Lightning Blue squad was charged with shadowing and shutting down some of the nation’s top goal scorers during the 2010-2011 season. A student at the prestigious Christian Brothers Academy, he sports a 4.1 GPA and his spectacular academics and soccer skills have earned him quite a bit of attention from several prestigious college programs.