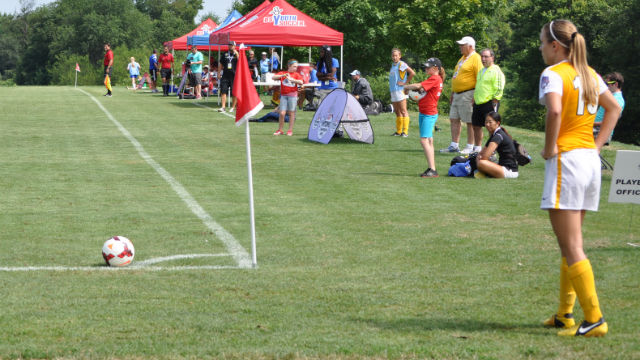 Below is a look at the girls Best XI from the U14 through U18 age groups.

GK Amanda McGlynn, Jacksonville FC U15: A tremendous defensive effort boosted Jacksonville to a national title, with the Florida side conceding just two goals across its five games. McGlynn, who came up big on a number of occasions after her defense was beat, perhaps played her best game of the week in Sunday’s final, which was perfect timing.

D Janiece Joyner, Cleveland FC U14: The anchor of a stout Cleveland FC back line, Joyner demonstrated a variety of tools amid a series of strong performances in a central defensive role. Her size is an obvious asset as she towered over some of her opponents, but she was quick with her lateral movement and anticipated where the ball was going. Her distribution and ball-winning abilities were solid as well.

D Elysse Branton, Braddock Road U18: The soon-to-be William & Mary defender excelled at the back for Braddock Road, helping her team keep shape and breaking up plays from her center back spot.

M Shannon Simon, Beach FC U18: It was a weekend of prodigious offensive output for Simon and her Beach FC side, and the Washington recruit came through in the clutch with a pair of semifinal goals, part of 17 the team scored in Maryland. Simon finished the week with four tallies, and was an ever-present weapon for Beach FC.

M Ashley Gonzales, Beach FC U18: Like her teammate Simon, Gonzales enjoyed a four-goal performance during the U.S. Youth championships, including a brace in the title game. She’ll start her college career at Long Beach State in the fall.

M Hailey Harbison, DMCV Sharks Elite U17: The California side won the U17 age group, and it was thanks in part to a defense that finished the week with three straight shutouts. Harbison’s work in the midfield helped make that happen, excelling at both ends of the field. She’ll take her talents to Pepperdine this fall.

M Savannah DeMelo, Beach FC U16: With two U.S. youth titles on the week, it was a great trip out east for Beach FC. Like her club teammates, DeMelo showed up when it counted, and topped the U16 age group with four goals, as they won both their semifinal and final matchups on penalties.

F Jojo Harber, Eastside FC U15: A tricky player with the ball at her feet, Harber showed time and again the ability to beat opponents on the dribble. Not only that, her decision-making was spot on, as she showed the tendency to make the right decision whether to pass, dribble or shoot.

F Murphy Agnew, YMS Xplosion U15: Speed can do tremendous amounts of damage on the soccer field, and it was her pace that helped Agnew separate herself from the pack, both literally and figuratively, during the week in Maryland. Her two goals helped push YMS into the championship game where they came up short against Jacksonville FC.

F Emily Knous, Legends FC U14: While she only scored twice during her week in Maryland, Knous does so many of the little things coaches ask of a striker – she connected play with her teammates, held the ball up, pressured defenders. One of her goals was a game winner in the semifinals, so she did deliver in the clutch as well.

F Mary Kate McGuire, New England FC U14: Her goal totals obviously say a great deal about the success McGuire had for National Champion side New England, as her seven goals were tied for the most on the girls side of any age group. But she was another forward who demonstrated a willingness to put in the work off the ball, and she was also eager to spot a teammate to try and setup a chance as well as score herself.