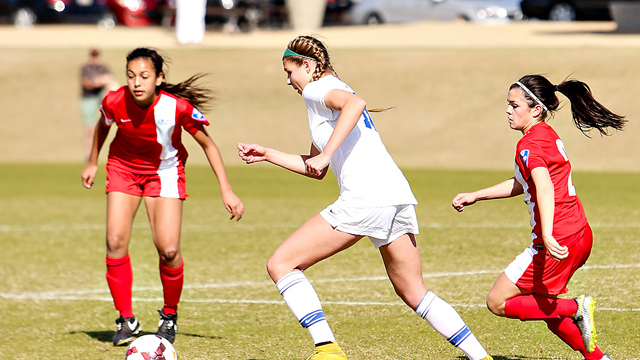 It was a beautiful day for soccer out at Reach 11 Sports Complex, which hosted the semifinals of the ODP championships. Too bad it wasn't a beautiful day all over the country, as inclement weather kept New York West 99 from being able to make the 1pm start time, and their match against Illinois 99 was moved to Saturday morning at 9:15am. Without an opponent, Illinois ran a simulated inter-squad game in a shortened field to keep their players sharp.

Cal South 99 took on Florida 99 in the other half of the 99 semifinal. From the start of the match Florida was able to control the ball, but had difficulty finding open shots. Florida midfielder Abbegale Newton did a great job early on of working the ball upfield to Alex Vandergrift, who used her strength and quickness to keep the ball away from Cal South defenders, but was never able to get a clean look for a shot on goal. Finally, 13 minutes into the action, Cal South's Kayla Cannon was able to score in transition by rolling the ball under the diving Florida keeper. After the Cal South goal, Florida went back to dominating possession, but shots on goal were few and far between. At half, Cal South led 1-0, and each team had three shot attempts.

The second half belonged to Cal South's Sophia Seraphin. Just two minutes after the break, Seraphin craftily dribbled around a diving Paige Liebel, and scored with her left foot to make the score 2-0. Sepahin would add a third goal for Cal South minutes later, and the defensive trio of Sabrina Enciso, Chloe Boice and Claire Watkins held Florida to a single post-halftime shot attempt. The 3-0 Cal South win means they’ll face the winner of the rescheduled New York West/Illinois game on Saturday morning.

Eastern New York 98 and Cal South 98 kicked off at 5pm, and at about 5:01 it was plain to see that Cal South was head and shoulders above their competition. UCLA commit Sunny Dunphy managed to get three shots on goal in the opening moments of the match, and while none of them reached the back of the net, it was one more clean shot than Eastern New York would have all evening.

Eastern New York was able to withstand the onslaught for most of the first half, largely due to the defensive activity of Jada Stewart, who played sideline to sideline, frustrating Cal South’s strikers and altering the accuracy of several shots. In the 40th minute, Cal South’s Julie Doyle took a throw in near the sideline, and dribbled past two defenders before sending the ball into the back of the net. Minutes later, Anastasia Eleftheriou added a goal from the right corner of the box and Cal South went into the half up 2-0.

The second half saw more scrambling, scrappy defense from Jada Stewart, who even came up from her defensive position at one point to facilitate Eastern New York’s best shot on goal of the night, a near miss by Ya’Nique Van Ness. Seconds later, Stewart was back in front of her own goal altering a shot by Doyle. Cal South still outshot their opponent 9-2 in the second half despite emptying their bench, and Sunny Dunphy was finally rewarded for her offensive persistence with a goal in the 78th minute. Cal South moves on to the championship game on Sunday, March 1st with a 3-0 win.

Iowa 98 and Georgia 98 played the final semifinal match of the night in a strong wind that dipped temperatures into the 50s. The first half was the Emma Cooper show, as the Iowa forward had four shots on goal in the first 30 minutes, scoring twice. Cooper’s first goal came on a pass across the box from Anna Frerichs, and her second came as Iowa players swarmed the box, causing Georgia to lose track of the ball in the crowd. Up 2-0 and seemingly in control of the pace, Cooper went to the bench for the remainder of the first half.

In the second half, Regan Steigleder pushed a deflected save past the keeper, and Elyse Huber added a fourth goal for Iowa to put the game away. Georgia’s offensive sets were continuously disrupted by a combination of Iowa’s Frerichs, Elizabeth Ward and Lauren Ronnfeldt. Despite the deficit, and the inability to control the ball once in Iowa territory, Georgia’s Kendall Baker never gave up hope that her team would get something going. Baker took four shots on goal and helped facilitate another in the closing minutes, but none hit their mark and Iowa was able to preserve the shutout and move on to face Cal South in the championship round on Sunday.