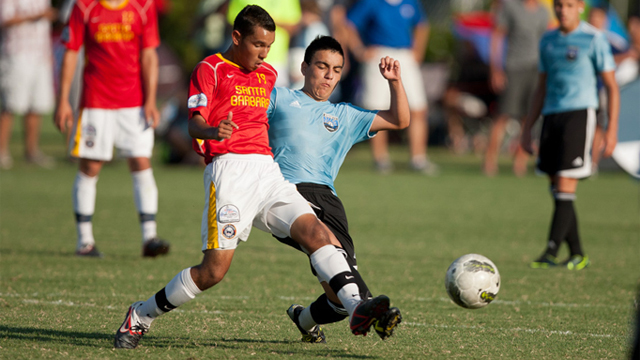 OVERLAND PARK, Kan. — The U.S. Youth Soccer National Championships kicked off Tuesday morning with the sun as hot as the competition. Tuesday’s games marked the first day of round robin matches. The teams will play each team within their bracket with the goal of qualifying for the championships on Saturday and Sunday.

Below are highlights from the U15 Boys and U14 Boys brackets. 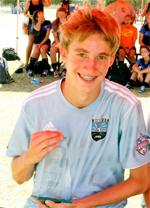 The Sunrise v. Santa Barbara matchup was the game to watch early Tuesday. By the 13th minute of the match, there was a clear control in the game as Sunrise passed effectively, maintained possession and held the ball on their offensive half for the majority of the first half.

That didn’t stop the Santa Barbara boys from giving Sunrise a run for their money. Having a few lucky breaks, Santa Barbara forced the Sunrise defense, led by Samuel Buzzas, to step up and make some key stops.

When Santa Barbara took the field for the second half, they seemed to be a completely different team. They came out ready to go, finding a few scoring chances right away. This second-half jumpstart equalized the playing field a bit and both teams seemed to have equal possession throughout regulation time. Each team had scoring chances that had the audience yelling in frustration. In the 53rd minute, a free kick from Sunrise’s Maximilian Krieg sailed across the box resulting in a header that went just wide of the net.

It seemed to be over for Sunrise in the 80th minute when a foul in the box granted Santa Barbara a penalty kick. But, using the same momentum he had all game, Sunrise GK Daniel Ragoo made a diving save to prevent a Sunrise loss.

In the end, it was all about finishing, and neither team could seem to get the ball in the back of the net.

Both teams will see their next opponents Wednesday morning at 8:30. Sunrise Elite will face up against Vardar 98. Santa Barbara will face GSA Phoenix 98 Red.

This match came down to a battle of teamwork, and the Michigan Wolves fell short.

To start the game, Pateadores came out strong, maintaining possession, winning 50/50 balls with ease, passing well, and seeking attacking opportunities at every turn.

The only aspect of the Wolves’ team that seemed to be working well, fortunately for them, was their defense. Led strongly by defenders Louis Meeks III, Quinn Loosle and Matthew Phillips, the Wolves’ defense managed to stop endless attacks from the Pateadores offense, keeping them to just one goal in the 33rd minute.

The second half saw a slight shift in play. The Wolves became more prominent in the middle of the field, while still holding strong against the Pateadores offense, holding them to no goals in the second half. But Pateadores’ first-half goal proved to be enough for the win.