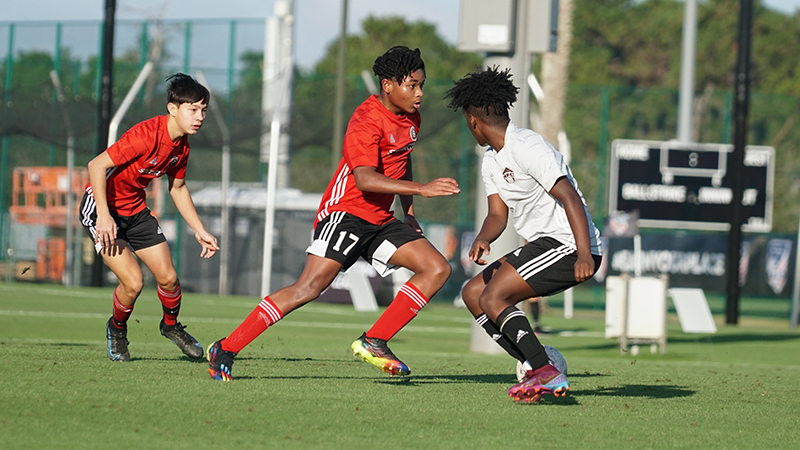 Many of the top 15U-19U Boys teams and players in the US Youth Soccer National League competed Dec. 1-5 in Orlando, Florida. The event featured teams from both National League P.R.O. and Elite 64, and all games took place at the ESPN Wide World of Sports Complex.

The National League P.R.O. games each counted toward league standings, as teams began their pursuits of top-of-the-table finishes that can result in direct advancement to the 2023 USYS National Championships. Combined with the excitement of top talent from Elite 64 clubs matching up during the weekend, National League Orlando provided a great atmosphere for youth soccer.

The weekend in Orlando featured many close games with little separating the teams. In National League P.R.O., the start of the season for 15U FC Dallas ETX 08 Garcia (TX-N) captures the essence of the league as the side has split its first four games while scoring seven goals and conceding seven.

“To be able to come to an event like this and compete against the best teams in the country, it really means a lot and shows what kind of heart these kids have,” FC Dallas ETX coach Michael Garcia said after his team’s win on Dec. 1. “For the kids, it really shows them they can compete against any teams in the country and — not just in soccer, but when they come across adversity in life — they’re able to step up and know they can push through.”

Recap some of the NL P.R.O. matchups and performances from Orlando…

LGN controlled much of the first half, but the best early chance came on a Billy Goat counter that saw the LGN keeper pressure the shooter into placing the shot wide.

After an event start to the second half, LGN went back on the front foot and broke through when Ethan Kyle sent in a cross that worked its way to Eli Rubio, who finished from close range. LGN later added an insurance goal when a long free kick took a deflection and found the back of the net — helping the Eastern New York side move to 3-0-0 on the season.

La Roca Milla SC (UT) went 3-0-0 to go to the top of the 16U Boys Group C standings. The Utah side was strong all around, and it did not concede a goal in its three games.

“That’s one particular thing that I like about this league. We are here because we deserve it,” La Roca coach Jose Milla said. “We have worked for it, and we have earned our place. It means a lot to the boys that we had to fight hard from the state and regional level in order to get to this point and be part of this league.

A set piece led to Dix Hills’ first goal, as Lukas Sheridan powered a header just under the bar in the 14th minute. Owen Caraftis doubled the advantage a few minutes later, but Anthony Powell pulled a goal back for Arsenal later in the half.

Nathan Hough helped Dix Hills regain a two-goal lead with a 67th-mintue header, but Powell once again answered for Arsenal when he finished a quick strike on a loose ball in the box. However, Dix Hills added a late goal from Garfield Gillespie to seal the 4-2 victory — helping the New York side grab sole possession of first place after three games.

The Cal-South side, whose offensive prowess was clear in all three games, went on the attack early to find the opening goal. Osvaldo Hernandez and Alexander Monjaraz both nearly broke the deadlock in the 15th minute, but their attempts were nixed -- one by the post and the other a great save.

Jordi Pineda finally brought Olympiacos in front in the 36th minute after pouncing on a loose ball in the box after Emilliano Medina’s shot hit the post. Evan Lozano doubled the lead five minutes later with a powerful long-distance strike minutes before the half.

Surf came out of the break with more energy and a desire to level the game, and Aagam Prakash brought his team within one with a goal in the 75th minute. Olympiacos stifled the rest of Surf’s chances and Pineda added his second in the 89th minute, which put this one out of reach.

FC Bucks Dominion 04 Boys (PA-E) fought for a 1-0 win against J Petrov Academy Red (FL) to gain sole possession of first place in 19U Boys Group C after one weekend of play.

Little separated the unbeaten NL P.R.O. sides for much of the game, but Dominion produced a winner in the 77th minute. A deflected shot bounced to Liam Hartman in the center of the J Petrov penalty area, and he used an acrobatic finish to direct a shot past the keeper for the game’s lone goal.

“You know every single minute you’ve got to work hard,” Dominion defender Shane Velez said of NL P.R.O. games. “If you turn off, that play at the end of the game, they could go down and tie it up and then we’re crawling back to battle for that top spot to get through to Nationals. Being able to get through National League and win it is so big heading into the spring season.”

To view all of the standings and results from the National League P.R.O. season, click here.

Michigan Jaguars Elite 64 08B and Boston Bolts Elite 64 08B squared off early Friday morning in Orlando, with both teams looking to pick up a momentum-building win in Elite 64 action.

Michigan Jaguars took control of the game early, with Grant Mooradian converting a chance in the fifth minute to open the scoring. The Jaguars added two more in quick succession, courtesy of Jack Fedell and Max Hunter in the 21st and 22nd minutes, to break open the match.

Dylan Hart brought one back for the Boston Bolts in the 27th minute, but his side would concede just before halftime with a goal from the Jaguars’ Wyatt Egan, adding to an already-frenetic first half full of goals. Both defenses settled in during the second half and kept the score as is for the remainder of the match, giving the Michigan Jaguars an impressive victory.

In their mini group in Orlando, AFC Lightning Elite 64 08B managed to come away with three wins while outscoring opponents, 6-to-0.

Sparta United Elite 64 07B and Michigan Jaguars Elite 64 07B entered Monday’s action as part of a quartet of Elite 64 teams that played several very close games in Orlando. With every game having previously ended in a draw or a one-goal margin, it was no surprise when Sparta and Michigan played to a 1-1 draw in their final game at the ESPN Wide World of Sports Complex.

Lucas Stan opened the scoring with a strike in the 27th minute, as the Jaguars went in front. That lead lasted just 13 minutes of game action, as Sparta replied in the 40th minute when Anthony Pimentel Silva found the back of the net.

Sparta nearly produced a game-winner with the game’s final play, but Michigan’s Luke Dziadosz made a last-ditch slide tackle on a Sparta near-post run to help secure the 1-1 draw. Sparta finished with draws in all three games in Orlando, while the Jaguars tied twice.

IMG Academy Elite 64 06B and Los Angeles Soccer Club Elite 65 06B squared off at National League Orlando on Sunday night, one day after both picked up points during their first matches on Saturday.

IMG opened up the scoring in the first half with two goals in quick succession. Joaquin Ojeda struck first in the 26th minute, and Aiden Tempro added to IMG’s lead five minutes later with a goal of his own to give his side a cushion heading into the break.

LASC, down two and needing a big comeback to leave with points, ramped up the pressure and turned on the offensive to find goals. IMG stayed poised in defense and stifled any and all chances that were thrown at them to walk away with a shutout victory -- their second in as many days.

IMG finished the weekend in Orlando with two wins and a draw.

Rockford struck first, an early third-minute goal from Saiheed Jah that broke open the game and gave them momentum. Juan Lopez doubled the Raptors’ lead in the 40th minute, a nice one-touch finish from a low cross to give them a 2-0 lead heading into the break.

Saiheed added a second of his own, and Rockford’s third, in the 64th minute to cement the victory and a 3-0 weekend in Orlando. Noah Deakyne brought one back for his side late in the game, a perfectly converted penalty after Jayden Williams earned the Ohio Galaxies the spot kick, but the game finished shortly after.

To view all of the results from the Elite 64 action in Orlando, click here.