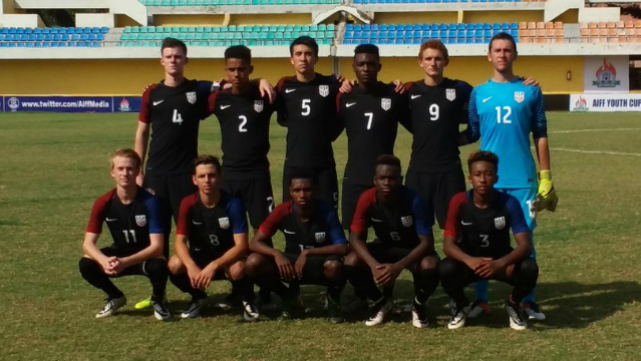 The U.S. U17 Men’s National Team ran out of gas on Wednesday.

In the scorching heat of India, a 10-man USA squad lost 2-1 in extratime against Korea Republic in the 2016 AIFF Youth Cup Championship game. USA played down a man for the majority of the game after midfielder George Acosta received a red card in the second half for an incident away from the ball. With the temperature in the 90s throughout the game, the conditions in Goa made the Korea's man advantage nearly insurmountable for the U.S. side.

This was the second appearance in a championship game for this U.S. squad in 2016 after winning the 44th International Montaigu Tournament in France in March. Coming up on the losing end on Wednesday though could be equally as beneficial as the U.S. went into this event with the plan to prepare this group for the conditions at the 2017 U17 World Cup in India. USA finished the event with a 2-1-2 record. Wins over Malaysia and India along with draws against Korea Republic and Tanzania in group play propelled the U.S. into the final on Wednesday.

Korea Republic was the first to strike after 105 minutes of scoreless play between the two teams (the sides drew 0-0 in group play earlier in the competition). Korea Republic scored the opening goal in the 15th minute in a good movement down the right side of the field. Lee Hanseok struck the ball well and put it past Alexander Budnik for the first goal of the game.

USA answered in the 31st minute when FC Golden State’s AJ Vasquez sent Toronto FC’s Ayomide Akinola down the touchline after a nice spell of build-up play from the USA. Akinola went at speed toward the goal and was brought down by a Korea Republic defender. Georgia United’s Andrew Carleton took the penalty kick. His initial effort was saved, but Carleton punched in his rebound.

USA had a chance to take the lead just before half when Akinola ripped a shot from the top of the 18-yard box, but his effort just missed the post and the two teams went into the break even at a goal apiece.

Akinola had the first chance of the second half when Weston FC’s George Acosta served a beautiful ball into his path and behind the defense, but Akinola hit his shot over the crossbar.

Minutes later, the game changed when Acosta was involved in an incident off the ball with a Korea Republic defender. Acosta’s actions earned him a red card and the USA was forced to play down a man for the rest of the game.

Despite being down a man, the USA limited Korea to only a few chances in the second half. The crushing heat slowed down the pace of the game, and the USA did well in taking some of the air out of the game while playing down a man.

The fatigue of the long week in India plus an exuberant Korea Republic side had the USA winded in extra time, but the USA defense kept Korea Republic away from the net for the most part.

Korea Republic found the game-winner with only five minutes left in the game when Jeon Seungmin hit a stunning free kick into the corner of the net to give the side the lead. USA did not have anything left in the tanks to really trouble the Korea Republic late and left the event with a second-place finish.