USA qualifies for the U17 Women's World Cup 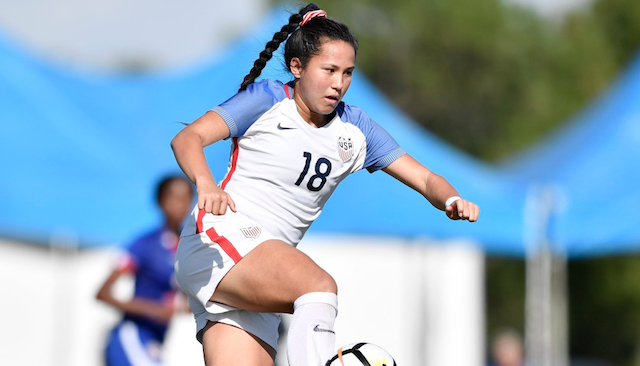 The U.S. U17 Women’s National Team earned a spot at the 2018 U17 World Cup on Sunday with a 3-2 win over Haiti in the semifinal game of the 2018 U17 Concacaf Championship. Haiti can qualify for the World Cup with a win over Canada in the third place game on Tuesday at 10 a.m. (ET). USA faces Mexico in the championship on Tuesday from the IMG Academy campus in Florida at 4:30 p.m. (ET). Both games can be seen on go90.com.

Haiti took the surprising lead on Sunday. Star midfielder Melchie Dumonay bent in a free kick from over 25 yards out early in the first half for the opening goal. USA goalkeeper Angelina Anderson looked like she was in the right spot to make a save on the shot, but she seemed to lose her bearings in goal and let the ball go past her in anticipation of it missing the frame of the net, but the ball snuck in past the post. It was only the second goal USA conceded at the tournament, and oddly similar to the one Julia Dohle conceded against Bermuda.

USA responded to the early deficit with a goal from Sunshine Fontes to put the teams back on level footing in the first half. Samantha Meza crossed the ball into the box, which ricocheted off two Haiti defenders before falling kindly for Fontes who blasted it into the net.

The home team took over the lead in the second half on a goal from Mia Fishel. Halftime substitute Reilyn Turner headed the ball down for Fishel who used her heel to flick it over her head. A Haiti defender tried to head the ball away, but it landed in front of Fishel who smashed it home for the go-ahead tally.

Reilyn Turner, who has been on the field for five minutes, with her second assist of the second half. Sunshine Fontes scored her second goal of the game. USA up 3-1 on Haiti in the Concacaf U17 Championship semifinal pic.twitter.com/SvHfepW8M4

Turner and the USA attack struck again seconds later. Meza played in the cross from the left flank for the So Cal Blues forward on the opposite side of the field. Turner again used her head to nod it down for a teammate. Fontes was the beneficiary this time and she netted her second goal of the game to give USA a comfortable two-goal advantage.

USA was cruising into the championship game with little trouble in the second half after snagging the two early goals. However, Dumonay added a second goal on a great bit of individual work and a terrific finish while on a full sprint.

Sunday’s performance was the best showing for USA at the event. Haiti played with a very deep defensive block and USA broke down the backline with a couple of clever movements, but predominantly utilized the advantage of Meza on the wing.

FT: USA 3-2 Haiti. Melchie Dumonay, who is terrific, made it interesting with this goal in stoppage time, but USA hangs on for the win. U.S. is headed to the 2018 U17 Women's World Cup pic.twitter.com/cpNsve6H45

The championship game should be a good challenge for USA, which enters the game with a plus 15 goal differential through four games. Mexico, holding a plus 16 goal differential, made easy work of a floundering Canada side in the other semifinal on Sunday. Mexico’s combination of tactical savviness and technical skills will offer a good measuring stick for the level of this team against another top international side.