Spring is in the air across the country (though you may not feel it in some places!) and that means it’s time for the business end of the US Soccer Development Academy schedule as we’re less than three months from the Development Academy Playoffs in Frisco, TX, June 24-28. There were a whopping 48 games across the country last weekend in the U18 age group, featuring many of the boys from the 2011 and 2012 National Top 100.  Here are some of the highlights.

(We will review the U16 Academy slate here on Wednesday) 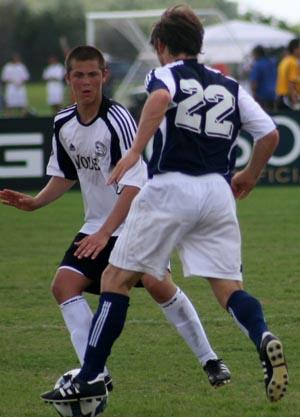 We begin our look around the Development Academy in the Central Conference Great Lakes Division where the Columbus Crew Academy, led by our #5 ranked 2011 player William Trapp (Akron commitment) faced off against Indiana United, playing to a 0-0 draw. Elsewhere in the Great Lakes Division, Derby County Wolves of Michigan stayed at the top of the division splitting a couple of key divisional games this weekend dropping a 3-0 result to Chicago Magic, but bouncing back with a 3-2 defeat of the Chicago Fire with goals from Eric Weberman (#46 overall), TJ VanSlooten (#29), and Nermin Crnkic.

A light weekend of games from the hotly contested Texas Division featured a marquee matchup of the top two teams in the division, FC Dallas and Lonestar SC of Austin. In a game that featured an amazing four of our top 100 National 2011 boys, FC Dallas came out on top 2-1 with goals from Victor Pinal and Jose Perez. Lonestar SC would redeem themselves in the second game of their trip to the DFW metroplex, defeating Andromeda 3-2 on Sunday afternoon. The only other game of the weekend was a matchup of two traditional powers in Dallas Texans and Solar SC who played to a 0-0 stalemate.

The Frontier Divisional games are just kicking off and the biggest game of the weekend was a wild matchup between Sporting Kansas City and Shattuck-St. Mary’s in Minnesota. All four goals were scored in the first ten minutes of the game as Sporting and Shattuck would draw 2-2. SSM’s goals came from Brett Habermehl  and Christian Blandon while William Witherspoon and Jordan Rideout (#50 overall) tallied for Sporting. Things are just getting started in the eight-team Frontier Division with a heavy intra-conference schedule over the next two months.

The South Conference saw a bunch of intra-conference games this weekend. Weston FC of the Southeast Division won a classic 3-2 comeback win over intra-conference rival CASL Chelsea of North Carolina. Weston was led by #9 rated Florida player and Florida Gulf Coast commitment Xavier Silva whose two second half goals completed a comeback from 2-0 down for the Florida club. Sekani Sinclar, the #86 overall 2011 player, added another goal for Weston.

In another intra-conference game, Kendall SC and North Carolina Fusion played to a 1-1 draw with late goals from David Cuervo for Kendall and Alec Rotunda for NC Fusion.

For most of the Eastern Conference teams, it was matchups outside of their respective divisions last weekend in preparation for the ultra-competitive Division games starting next weekend.

It was an up and down weekend for PA Classics who scored an emphatic 3-0 win over South Central Premier behind goals from Donald Burton, Kelton Cheney and Alex Panuccio. PA Classics would slump to a 4-0 loss to Oakwood SC of Connecticut the next day.

in the division with 1-0 wins over Real So Cal and Cosmos Academy East.

The other club to make a huge statement this weekend was Arsenal FC of California who thumped Real Salt Lake-AZ 4-1. The Arsenal FC goals came from Raul Mendiola, Dennis Flores, Jordan Gibbs and Julio Reyes while RSL-AZ’s strike was from Ricardo Velasco.
Northwest Division

With first place Seattle Sounders FC Academy idle, California Development Academy took full advantage scoring a 2-1 victory away to Santa Cruz Breakers on Sunday afternoon. CDA pulls within 7 points of Seattle with three games in hand on the MLS side and a showdown between the two clubs looming on May 28.

What else did we miss from this previous weekend’s full slate of USSDA action? Did you attend any of these games and what did you see?