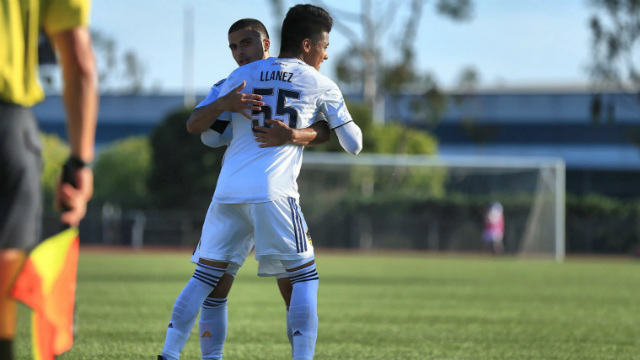 While Southern California is regarded as one of the United States’ premier regions for producing up-and-coming talent, the LA Galaxy have not managed to successfully move players on to the first team.

The franchise did recently sign Efrain Alvarez to its first team, after a quick stop with LA Galaxy II, the organization’s side that competes in USL.

Another player trying to work his way through the pipeline, Ulysses Llanez, made headlines with his first professional goal for LA Galaxy II this past Sunday.

Competing on an academy deal that ensures he retains college eligibility, Llanez started and played 87 minutes in a 1-1 draw against the Red Bulls. He provided the game’s only goal, tallying in the 37th minute with a well-taken finish from just inside the area.

Llanez harried opponents on the right wing, combining well with teammates in buildup play, while looking to create chances from wide areas during his shift against the Red Bulls. It was an impressive performance overall, particularly when considering the context. Our friend Adam Belz put together a useful GIF thread on Twitter that shows even more. The LA academy standout is also playing himself into the picture for the U.S. youth national team player pool. He was named as the alternate for the U.S. U17 MNT World Cup roster in 2017, and turned 17 at the beginning of April. Tab Ramos called up Llanez to the U.S. U20 MNT for a trip to Europe in March, where he held his own despite competing against players 2-3 years his senior. Domestically, he has five appearances under his belt so far in the current season, after making his USL debut last year.

Both Llanez and academy teammate Alex Mendez have been consistently in the 18 for LA Galaxy II, and that is mostly likely to continue. It wouldn’t be a surprise to see either of them, and Llanez in particular, jump at an offer to follow in the footsteps of Alvarez and sign a USL contract at some point in 2018.

The Galaxy academy standout wasn’t the only U.S. youth international to score in USL action over the weekend. Andrew Carleton, leading a very young Atlanta United 2 side against 2017 USL Champions Louisville City FC.

Carleton atoned for an early penalty miss in the 58th minute, when he converted another spot kick in stoppage time to secure a 1-1 draw. The Atlanta United attacker was involved in both penalties, as he pulled off a clever backheel into the path of Pablo Sandoval, who was taking down in the box (at least according to the referee) before he missed from the spot.

In stoppage time, with his side trailing 1-0, Carleton earned a penalty, which he converted to secure the point at home.

It was an extremely young starting lineup for ATL 2 on the day, as Carleton was joined in the XI by George Bello, Miles Robinson and Christopher Goslin. 2018 first round pick Jon Gallagher also featured, along with U.S. youth international Jose Carranza.

The game itself served as a reminder of how valuable it is for teenagers to compete against older, more experienced players. And this was reinforced on Tuesday night, as Atlanta United 2 played the Charleston Battery – this time losing 3-0. It was another academy-centric lineup, with defender Kendall Edwards getting the nod, along with a first start for Jackson Conway.

Still, while it's nice to see players getting a run somewhere, the initial target for young American players should be a club in Europe, rather than competing at a minor league baseball stadium. That's not to say MLS teams have an obligation to slot younger, dometic talent into the lineup, but rather those aiming to make the most of their potential should seek out the highest level possible. The caveat there is the lack of a European passport for many of these kids; so the dillema is that players have to either tie themselves to an MLS contract as a 15 or 16 year old, or sacrifice development years and wait until turning 18. At minimum, signing at that age and having USL as an outlet is much better than even five or six years ago when the rare teenage signing would languish on a bench, eventually fizzling out.

It’s been a rough start to the season for the Philadelphia Union, sitting on five points from six games. The team’s woeful attack has been the reason, scoring just three goals in that stretch.

On the defensive side of the ball, injuries and form have forced the team to turn to inexperienced academy players. Auston Trusty, and more specifically, Mark McKenzie started in Saturday’s 2-0 defeat at the hands of FC Dallas.

The latter came on to make his first start in MLS, a swift trajectory after signing with the Union in January, spending last fall at Wake Forest. McKenzie’s a very promising defensive prospect that looks poised to become a key pillar for the U.S. U20 MNT cycle in 2019.

But starting this soon into his Union career is a bit unexpected, especially considering he backed up Kevin Politz for most of the 2017 college season. However, McKenzie held his own, as evidenced by the action chart below. Calm and smooth with possession, McKenzie’s passing wasn’t extremely ambitious or incisive, but he didn’t loss the ball in bad spots, completing 57 of 59 passes attempted. Playing in rainy conditions, he did slip in his own half that allowed FC Dallas in on goal, but fortunately they missed the target. It was an up-and-down first half for McKenzie and Trusty, another youngster in the starting lineup, as Dallas attackers found space on more than one occasion but were kept at bay by Philadelphia goalkeeper Andre Blake.

On the night, he made six recoveries, two blocks in his penalty area, an interception, a clearance and a tackle that snuffed out a very good chance for FCD.

The bulk of minutes are still likely to come in USL for the Steel, though even in hard times the Union can take heart that the defense isn’t a huge problem.