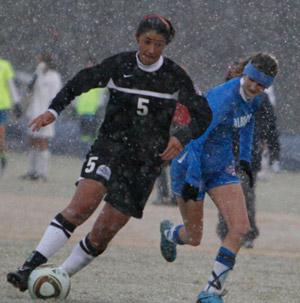 The USYS National Leauge continued on a snowy Saturday.

WILSON, N.C. (Dec. 4, 2010) –Only one more day remains in the opening weekend of the US Youth Soccer National League girls play for teams to solidify their standings until the next meeting in Orlando, Fla.

The final day of matches will be played at Wilson Gillette Soccer Complex with select Under-15 and 16 Girls’ games being played at Fike High School and Barton College, with the next meetings being held in Orlando, Fla., Dec. 31 – Jan. 2, and then in Las Vegas in March 18-20. For a complete US Youth Soccer National League schedule, click here.

Under-15 Girls
Last year’s Region I Champions look to make it back to Nationals as SAC United Premier (MD) stayed undefeated with two wins and a draw as they moved into second place in the standings with a 2-0 victory over So Cal Blues (CA-S). Casey Martinez put SAC in front in the 35th minute and Sheridan Street topped it off with a goal in the 71st. SAC has a chance to take over the top spot tomorrow as they play division leaders, AFC 96 Elite (GA).

Internationals (OH-N) got into the win column with a 2-1 win over Arsenal Elite (FL). Emily Ogle put Internationals in the lead in the 28th, but Danielle Gottwik scored just after halftime to even the game. Victoria Martinis then stepped up and grabbed the victory for her team with a 71st minute goal.

Under-16 Girls
Hurricane FC 95 (OK) stayed perfect and in a share of the top spot with a victory against GSA 95 Phoenix Red (GA). After a scoreless first half, Region III ODP player Elizabeth Keester scored in the 56th and 75th minutes while Claire Kelley added one in between to take a 3-0 Hurricane lead. Region III ODP players Rachel Garcia netted in the 81st for GSA to finish 3-1.

Blast FC (OH-S) notched their first win of the season, taking down former Region I Champion VSA Heat (VA). Brittany Maisano scored the lone goal of the game in the 39th.

2010 Region III finalists United FA 94 Elite (GA) got their first win of the weekend, defeating Internationals (OH-N) 2-1. Alexa Allen scored first for United 12 minutes into the match. Kaylee Semelsberger knotted the score for Internationals in the 65th, but Meghan Hussey turned in the winner just two minutes later to lead United to the victory.

Toro Bravo (NE) recorded a victory versus LaRoca (UT) in their attempt to return the National Championships after becoming the first girls’ team from Nebraska to reach the feat in 2010. In a tight game, Karlie Mueller broke the deadlock with just nine minutes to play to move Toro to 1-1-1.