Wash. forward stands out amongst U14 GNT

Comments
Every soccer player has the aspiration to be the best, and there is no better way to measure that, than by playing with the best. And there’s no better place to play with the best than at a youth national team camp. Last week, 36 of the best 14-year old girls gathered at the Home Depot Center for a week-long U.S. training camp.

Daily training and five scrimmages later, there were a handful of girls who stood out above the rest. One of those players was forward Mariah Lee. A native from Covington, Washington, Mariah plays for the Girls U15 Washington Premier Football Club’s ECNL team. 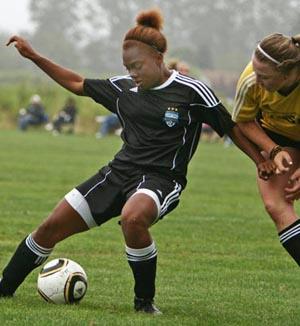 Maria Lee competes for Washington Premier.
Mariah may not be an intimidating player as first glance, but as her head coach, Scott Halasz, points out, it’s the qualities that you don’t see that make Mariah very lethal.

“She came into the club about two years ago, and she was on the shorter side. But she is very astute of the game, and can apply the information that we give her very quickly. Which has allowed her to progress very well,” Halasz said. “Plus, as of yet, I have not seen anybody that can match up against her strength and speed.”

It was that strength and speed that she displayed at the U.S. national team camp, which helped her climb to one of the best players on the field. But Michelle French, who was in charge of the camp, placed Mariah as an outside back position at the start.

“When she went to the U.S. ID Camp in the summer, she was being played in the back,” Halasz said. “So we prepared her to play as an outside back. During training camp, she called me and told me that they shifted her up front.”

This wasn’t because Mariah couldn’t perform as a defender. On the contrary, she did a marvelous job taking on forwards, breaking up chances, and driving up and down the flanks. She used her speed to beat strikers on clearances and used her strength to knock players off the ball.

However when French decided to move her forward, Mariah hit her comfort zone. It was clear she felt more comfortable, her vision was remarkable and her footwork broke through defenders very effectively.

“When I spoke with her after the camp se told me that most important thing was adjusting to the speed of play,” Halasz explained. “The demand is a lot higher.”

The highest amount of demand would come in the last scrimmage of the week, when Mariah faced off against one of the best defenders in camp, Annia Mejia. Mariah wasn’t able to score, but showed flashes of how much of a danger she can be, using her speed to beat Annia and get crosses off.

For Mariah the magnitude of her first U.S. national training camp is something she hasn’t taken lightly. She sees it as a launching pad for progress.

“She always wants to know how she can get better. For her, the training camp was very beneficial because she enjoys the competition,” Halasz said. “You can tell she has that motivation to come back and work hard.”

Mariah’s experience is also a benefit for Washington Premier FC. Her experience resonates to her teammates in a degree that no coach can, as Halasz puts it.

“She is the leader of the team and the girls look up to her. She is humble and a key component to our team,” he said. “She can be a motivational tool. We can only tell the girls how prepared and how ready they have to be, but when a teammate tells them where exactly they need to be to compete at that level, then they listen.”
Related: Players To Watch,
Headlines
Club Rankings HQ
View all rankings >>