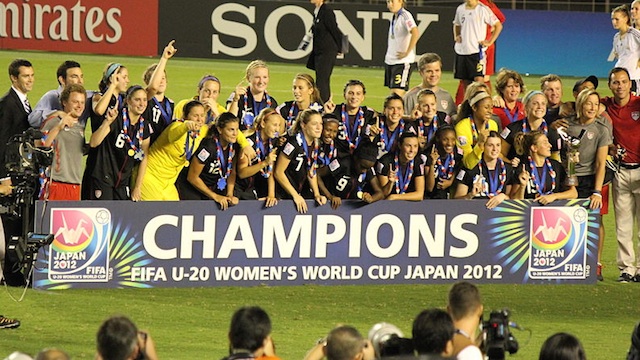 Cari Roccaro remembers the last 10 minutes of the 2012 U20 Women’s World Cup final as the most hectic of her life.

Kealia Ohai’s 44th minute goal against Germany staked the U.S. to a 1-0 lead it took into the final minutes, and Roccaro, one of the youngest players on the team, was tasked with clearing away German advances from her vantage at center back. When the final whistle finally blew, Roccaro remembers turning to teammate Vanessa DiBernardo with tears in her eyes and being enveloped in a hug.

“It was the best feeling to know we were the best team in the world,” Roccaro said.

The journey begins anew today for the U.S. and Roccaro, one of just two returners from two years ago alongside Stephanie Amack. The U.S. opens group play against Germany today at 7 p.m. ET in Edmonton, Canada on the first day of the 2014 U20 Women’s World Cup. It’s a fitting circle considering the U.S. had to go through the Germans twice to lift the cup in 2012, their second title in three U20 World Cups and third since the tournament was organized in 2002.

The U.S. faced Germany in group play two years ago and was drummed 3-0, but they squeaked out of the group anyway over China on goal differential. Knockout wins over North Korea and Nigeria gave the Americans another crack at Germany in the final, and Ohai’s goal combined with a determined defensive effort assured the trophy.

Bizarrely, the U.S. has almost the exact same group as it did in 2012, with China and Germany on the menu again and only Ghana swapped out for Brazil. That’s a push as far as talent’s concerned for the tournament’s unequivocal group of death, which the U.S. will be forced to navigate for the second time in as many tournaments. The U.S. follows Germany with Brazil in Edmonton on Aug. 8 and finishes in Moncton on Aug. 12 against a China team it drew 1-1 in 2012.

MORE: Horan in form ahead of U20 World Cup | Young core hopes to make impact for U20 WNT

“It’s the old adage that to be the best you’ve got to beat the best,” U.S. U20 coach Michelle French said. “We’re going to come out of the gates with Germany knowing it’s not do-or-die playing them. We just need to get the right results at the right time and get the right goals and not give as many up. We just want to advance. Just find a way to advance.”

French has been explicit that the turnover from cycle to cycle means this team “isn’t defending anything” in the strictest sense. Only Amack and Roccaro return, and the roster features five players who have yet to start college. Attacking midfielder Mallory Pugh, the youngest on the roster, was 14 during the last U20 World Cup. But it’s still hard to ignore the burden heaped on a side that will be expected by many to defend its crown.

To that end, French has some roster decisions to make. Horan seems like a lock to start up top, but who she’s paired with is still uncertain. Record-setting Boston College striker McKenzie Meehan was scratched from the roster due to injury last week and replaced by Connecticut’s Rachel Hill. Forwards Margaret Purce and Savannah Jordan, both of whom featured heavily in CONCACAF qualifying, are in line for starting gigs as well.

French shook up the midfield when she elected not to select former U17 World Cup captain Morgan Andrews, the lauded Notre Dame holding midfielder who’s featured heavily for YNT teams in the past. That opens up the field for players like Andi Sullivan, who played right back during CONCACAF but is likely to move back to her more natural position in the midfield for the World Cup. Pugh’s deployment - namely whether she starts as one of the youngest players in Canada - will also be of note.

The back line appears to be the team’s strong suit. Roccaro and Amack could conceivably line up next to one another in central defense to form the most experienced center back pairing of any team at the tournament. Meanwhile, both Brittany Basinger and Kaleigh Riehl have both recently put in solid shifts at outside back, where the team is deep and talented. Fresh off a national title with UCLA, keeper Katelyn Rowland is likely to start, but she’ll be pushed for time by her Pac-12 counterpart, Stanford’s Jane Campbell. Both are among the best in the world between the pipes in this age group.

The U.S. will expect to show well this month. Not only because it boasts one of the most talented squads in Canada, but because of the lineage laid down by teams past.

“We’re really excited,” said Horan, who just wrapped her second season at Paris Saint Germain. “We’ve been training for two years for this opportunity. We’ve been working hard and I think we’re just ready to go.”