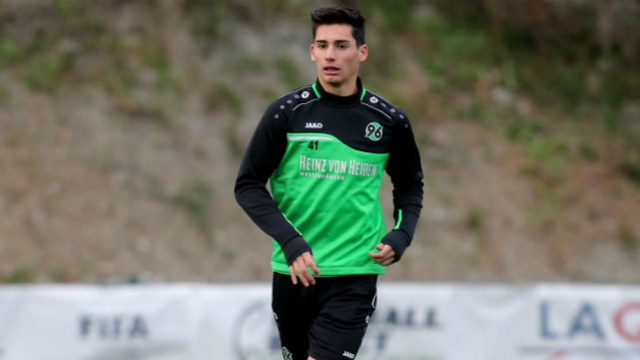 Welcome to a weekly feature tracking young Americans playing for Academy teams in Europe. Each week, we will provide a roundup of minutes played and performances from U.S. youth national team players around the continent competing in youth sides. Once players move to the first team, they will no longer be tracked, as other outlets provide those rundowns.

This week’s edition includes one goal-scorer in Argentina, hence the tweak in title.

Sebastian Soto’s Hannover 96 side found itself on the wrong side of its weekend clash in A-Junioren action. Three first-half penalties put the hosts down 3-0 at the hands of Hertha Berlin.

And while the U.S. Under-20 MNT forward added a goal to cut into the lead, Hertha tacked on two more goals to earn a 5-1 win on Saturday.

Soto wasn’t the only young American to find the back of the net in Germany this past weekend. U.S. U17 World Cup veteran Blaine Ferri got in on the scoring action. Competing in the Bayernliga with Greuther Furth, Ferri got his name on the score sheet in a 4-1 victory against SpVgg Unterhaching.

Zyen Jones made it three Americans to find the back of the net in German youth league action. Zyen Jones scored the only goal of the game for Schalke U19s, which beat MSV Duisburg 1-0. Jones subbed off in stoppage time as his decent form continues.

Christopher Richards returned to action at Bayern Munich, as the U.S. U20 central defender played the full 90 minutes in a 2-1 win against Nurnberg. Malik Tillman put in an 88-minute shift for the Bavarian side. A strong 2019 for Michael Edwards and his Wolfsburg U19s side continued, as they beat Niendorfer TSV 3-1, with Edwards playing the entirety of the match.

SC Freiburg U19s conceded three goals in the first 48 minutes on the way to a 3-1 home defeat against FC Ingolstadt. Midfielder Alex Mendez played the entire game as the U.S. U20 midfielder continues to build fitness in 2019.

It surely isn’t going very well for Hannover in this week’s Bundesliga. And while the U19s were pasted over the weekend, left back Chris Gloster was in the starting lineup for their reserve side, helping Hannover II pick up a win and maintain their spot at the top of the table.

Acosta on the scoresheet in Argentina

While this weekly column usually digs into the top Americans playing in Europe, this week’s edition gets an exception. Heading down to Argentina, another U.S. U17 veteran got his name on the score sheet. George Acosta, currently playing for Boca Juniors reserve side, bagged the game-winning goal in a 1-0 victory against Club Atlético Unión. He entered the game as a second half sub and provided the curling finish below.

Youth league matches are hardly about the results. But for a couple of Americans in Spain, they picked up big wins in their most recent outings.

Akil Watts earned the starting nod and played the duration of RCD Mallorca U19s, as they held off Girona by a 2-1 score. Watt (No. 2 in red in the highlights below) went the distance in the win.

Barcelona Juvenil A winger Konrad de la Fuente earned the start, playing just over an hour as they won 2-0 against rivals Espanyol.

Over in England, Matteo Ritaccio was in the starting lineup for Liverpool’s Under-18 side. They were big winners, defeating Blackburn by a 7-2 score. The former BW Gottschee midfielder played the duration.

While Folarin Balogun’s last youth national team camp came with England, it’s worth noting the striker’s torrid form for Arsenal U18s at the moment. He scored a hat trick on Saturday, raising his season total to 16 goals in 13 games. Born in 2001, he was last called up to a U.S. youth squad in August 2018. Having played with England at the U17 Championships last May, he would have to file a one-time switch in order to represent the United States.

Indiana Vassilev was also in action in England. Playing 88 minutes for Aston Villa U18s this time, his side fell by a 1-0 score against Chelsea FC.

U.S. U20 right back Sergino Dest continued his regular role in the starting lineup for Jong Ajax, the Dutch power’s reserve team. He went the distance in a 2-2 draw against FC Den Bosch on Friday.

Ajax Under-17 easily handled their rivals Feyenoord. Forward Joshua Pynadath entered the fray with just over 10 minutes to go, helping to see out a 4-1 victory for the Amsterdam side.

Celtic advances to U18 Cup final

UCLA commit Cameron Harper remains a fixture for Celtics Under-18 side. It's unclear if he's signed a full deal to turn pro or not, but Harper was among the goals in Celtic's 3-0 semifinal win against Queens Park on Sunday. They'll take part in the Youth Cup final later this season.