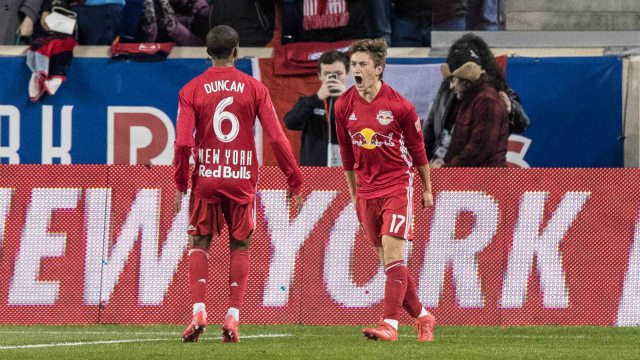 Each week, TopDrawerSoccer.com will take a brief overview at the involvement of rising, U.S. eligible players to see minutes in Major League Soccer.

To be eligible, players must be born January 1, 1993 or later and be eligible to play for the U.S. men’s national team.

Below is a look at the action from week two:

The biggest score line from the second week of MLS action also featured one of the youngest starting lineups of the weekend for the winning side.

The New York Red Bulls ran away from the Portland Timbers at Red Bull Arena, securing a 4-0 win while resting a number of regulars with one eye on the second leg of the CONCACAF Champions League quarterfinal later this week.

Two of New York’s most recent academy signings made their MLS debuts. Kyle Duncan, an academy product that had signed in France with Valenciennes, started after his signing was announced by the club a couple of days before the match. Benjamin Mines, who signed a Homegrown contract instead of heading the college route at Stanford this fall, started and scored what turned out to be the game-winning goal.

Both Mines and Duncan did well in their debut. Mines, deployed in the wide attacking positions, harried defenders without the ball and was generally when he had it. His goal benefited from some lackadasical Portland defender, though chances like that have been missed previously. Duncan hardly had any shaky moments, and while he is likely to remain a backup, he should get a longer run when incumbent starter Michael Murillo heads to the World Cup with Panama later this year.

In all, five players from the starting lineup all played in the Red Bulls Academy (Connor Lade, Derrick Etienne and Sean Davis), while Tyler Adams entered the game as a second-half substitute. Head coach Jesse Marsch has been adamant about getting young, domestic players

Toye with a promising sub appearance for Minnesota

However, after another injury to Abu Danladi, Toye made the trip to Orlando last weekend. And when he made his professional debut in the 72nd minute, he certainly made the most of his chances.

With the sore locked at 1-1, the former high school soccer star played a pivotal role in the winning goal. His awareness to flick-on a low pass into the path of Miguel Ibarra opened up the Orlando defense, as Ibarra eventually found a wide-open Ethan Finlay to win the game.

While playing time is likely to remain an uphill battle for Toye it was extremely positive to see him involved in the team’s winning goal – even if he missed a late chance on the break to get his first professional goal.

Only four of the 35 players that were picked in the third and fourth round (via conference call, no less) in the 2018 MLS draft have signed with their respective team to date.

Over the weekend, two of them stepped up and made notable contributions.

Central midfielder Ken Krolicki has clearly made an impression on head coach Remi Garde. Through the first two games, the former Michigan State stand out has played all 180 minutes. The Impact lost both games, 2-1 and 3-2 respectively, though he hasn’t looked out of depth and Montreal’s issues go far beyond him seeing minutes in central midfield. His numbers were solid: 24/28 passing, 2/4 tackles, 1 block, 3 recoveries, 2 fouls drawn.

The other late-round pick to make an impression was a player that didn’t even get invited to the 2018 MLS Combine. Grand Canyon forward Niki Jackson scored more than 40 goals during his college career but was overlooked for a number of foreign attackers that weren’t drafted. Jackson, who debuted for the Colorado Rapids earlier this month in CONCACAF Champions League, scored in his MLS debut.

The Rapids went on to lose the game due to an injury-time goal, but his brave finish will hopefully get him more looks down the road.

Veterans of the 2017 U.S. U17 World Cup team continue to struggle to see the field.

James Sands (NYCFC) and Christopher Goslin (Atlanta United) failed to make the 18, while Jaylin Lindsey was an unused sub for Sporting KC.

Chris Durkin led the way, coming in off the bench to play 10 minutes in a game where D.C. United was losing by three goals. His foe, Andrew Carleton, came on in the dying minutes of added time, hardly something to lean on.