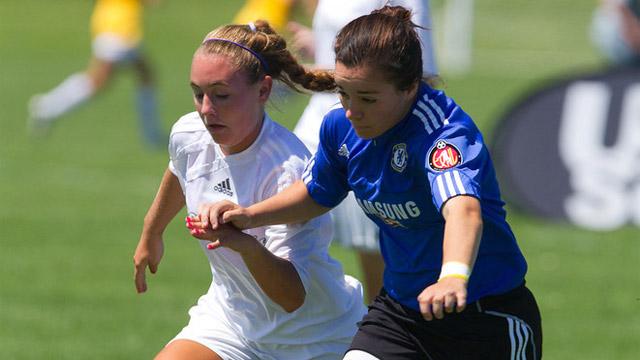 AURORA, COLORADO – The best season yet of Elite Clubs National League closed here Saturday with four national title games and plenty of optimism for a league with the best clubs around the country. Following are some details of the finals and comments from players and coaches. Check our 91st Minute Blog later in the week for some more videos of some of the more interesting scenes from around the finals.

After a delay for lightning and the halftime break, CASL went up early in the 2nd half when Joanna Boyles headed in another bullet corner from Wagner to make it 2-1.  Damon Nahas’ North Carolina side seemed to be dealing with conditions better and the score went to 3-1 when Reckert converted a grounded cross from Alexis Degler. CASL kept running and Reckert finished her hat trick from short range on a deflected setup from Alexis Shaffer for a final scoreline of 4-1.

Wagner, Reckert and Boyles were happy campers after the win.

Played in the hottest part of the day, this match was a bit more scratching and clawing then you might like to see, but Stephanie Hamilton’s excellent near-post run and header from an Allie Bailey cross gave Surf a late goal and a national championship.

Surf had squandered a few chances earlier, but showed great patience in front of the net on the buildup to the goal, as Hamilton and Bailey discuss here.

The nervous moments I mentioned came in the form of a Rachel Cole shot that Surf goalkeeper Michelle Craft kept out with a diving save, a header from PDA’s Carly Black off the crossbar, and a cross that whizzed untouched through the 6-yard box.
Surf coach Colin Chesters said such a late rally from his opponents was to be expected, and also credited his team’s commitment to winning

U15 Final: Lonestar SC 1, Carmel United 0
A late goal from Lonestar’s Mikaela Harvey provided the difference in this one, as she fired home from the edge of the area after a good cutback from Jessica Johnston.

The team celebrated with a throwback to U8 days, running through a human tunnel.

FC Dallas and Atlanta Fire United won the Promotion/Relegation bracket and will be in Flight A next season. San Juan SC and Real Colorado will play in Flight B.

KCFC won Flight B for 2011, defeating Sereno SC in the final.

San Juan SC and Freestate Soccer Alliance won the Promotion/Relegation bracket and will be in Flight A next season. Carolina Elite and Sereno SC will play in Flight B.

Colorado Rush and SC Del Sol won the Promotion/Relegation bracket and will be in Flight A next season. D’Feeters and Utah Avalanche will play in Flight B.

Carmel United won the Flight B championship for 2011, 2-1 over Carolina Elite.