The fact is, the elite youth soccer landscape is an alphabet soup of organizations and competitions, allowing multiple teams in every age group to make the claim for being national champion. 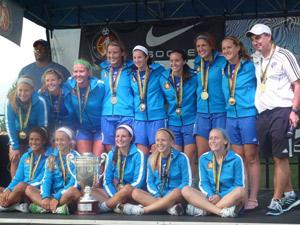 U18 Girls Champions, KCFC Alliance
The TeamRank National Championship isn’t about discrediting any team’s accomplishments, but rather highlighting them and placing them in context of the nationwide quest for club soccer team excellence.

Our system also pays attention to what soccer devotees around the world look at, meaning a little less about volume of tournaments and a little more about the always-exacting challenge of league play, with points adjusted for size and scope of leagues. Similarly, with championships of various kinds being available for winning, we try to accurately gauge which are the most significant based on strength of field. The USSF Development Academy is only tracked in a pair of separate age groups, given the unique format and exclusivity of that competition. There is no preference given to any event of any type in relation to business associations such as advertising, tournament software or anything like that.

There are some wrinkles in the U.S. Youth Soccer setup, where some regionals have quarterfinals and some don’t, but we can’t help the lack of uniformity in that competition, which is especially egregious given that differently-formatted regionals feed into the same national competition. Teams from regions with no quarterfinals (and thus fewer teams advancing from group play), are similarly at a disadvantage in our setup. The U13 age group is also affected in that Region III doesn’t have a competition for that age group.

{mosvideo:350}All of that said, the results have been interesting to watch and you can see them here. One especially noteworthy race saw U17 Boys teams Penn Fusion and Grand Rapids Crew Juniors come in with exactly 122 points each, the Michigan team having won the U.S. Youth title but the Pennsylvanians doing better in league play. In other age groups there will be some quantity vs. quality arguments, but again, as the competitive landscape shifts, especially on the girls’ side, hopefully some clubs and teams will settle into their preferred path of competition and cease trying to play in all of them.

Season two of the TeamRank National Championship begins immediately. The feature tracks performance of teams through the season, from August to July, incorporating the various national championships, leagues at all levels and several hundred tournaments. More than 10,000 teams are tracked in the process. Teams who do not yet have their rosters information entered into our system should do have their managers do so by finding their team in our system and clicking "Update Profile". Those players will then also become part of our Players To Watch database.

Details on some tweaks to our points system (mainly allowing for additional tiers of leagues and tournaments) will be announced next week along with our opening updates for the 2011-2012 season (it’s already underway). We’ll continue with running updates on the scoreboard and weekly articles featuring some of the age group races.