Real So Cal U17 tries to duplicate postseason

Real So Cal’s U17 team finished last season with a sense of accomplishment after setting a goal at the start of the season to make it to the ECNL National Championship. The squad accomplished that goal after a whirlwind run through the playoffs with a couple of upset victories.

But the glass slipper did not fully fit Cinderella last season, and CASL defeated the Southern California club in the title game in Denver, which left Real So Cal longing for a return to glory.

“Our goal is to win,” Real So Cal U17 head coach Kristy Walker told TopDrawerSoccer.com with a lighthearted laugh. “Last year, the goal was to make it to the National Championship and we did. We got beat by a good team, and I am not one to make excuses. Our goal this year is to do the same.” 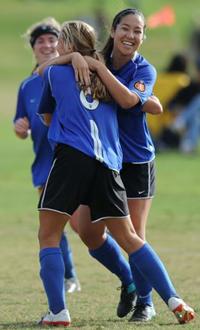 This year might be more difficult for Real So Cal to duplicate that run to the title. A handful of players on the team are vying for spots on various national teams competing at the CONCACAF Qualifying event in May for the U17 World Cup.

“Arielle Ship is with the [U.S.] U17s right now and trying to make the roster for the World Cup, which is awesome,” said Walker. “Maddie Kaplan and Carley McBeath have been in camp with Canada’s U17 team. And I have two, Natalie Rivas and Rosalba Barbosa, trying to make the Mexico U17 team.”

There are a few others on the team who have been in camp with the U.S. U18 team as well.

“It is just a phenomenal team,” Walker said. “They work well together. They work hard and hold each other accountable.”

The coach went on to say how much she enjoys training sessions with this team because all the players want to be there.

“It makes my life simpler as a coach; I can plan good practices because these girls will compete in them,” Walker said. “I think that is the reason why we have accomplished so much because the level of talent on the team challenges them to be better.”

It is a roster of players bound for the next level, as the coach said all of the seniors have already signed letters of intent and the juniors will be making verbal commitments soon.

She added that the local competition has really helped push this team to greatness as well.

“Another benefit of being in Southern California is you play competitive games all the time, so you have to stay up to par to keep up with these teams,” Walker said. “Slammers and Surf are always big games for us. Also, Legends Breakaway is a very talent team and always a tough game for us.”

Even though the goal is returning to the Championship game, the coach knows it is a journey that will take many steps before it can be achieved.

“The motto is to take it game by game,” Walker said. “You want to make it to that National Championship, but you won’t make it there if you look there before you look at the game right in front of you.“