The ACC has a bit of a different look ahead of the season with the addition of three programs: Notre Dame, Pittsburgh and Syracuse.

That said, look for this year’s contenders to come from the holdovers – with favored Maryland, North Carolina, Wake Forest, Virginia and Duke not too far behind in the conference chase.

Thanks in large part to a number of injuries, it was a season of mixed returns for an Eagles side that had their share of experience in Colin Murphy, Kyle Bekker, Charlie Rugg and goalkeeper Justin Luthy. The back line does boast two seniors who started all 19 games last year, with pro hopefuls Chris Ager and Nick Corliss both back. Rugg’s departure leads a void up front in particular, but midfielder Derrick Boateng represents a significant piece of the puzzle as head coach Ed Kelly looks to rebuild his attack. 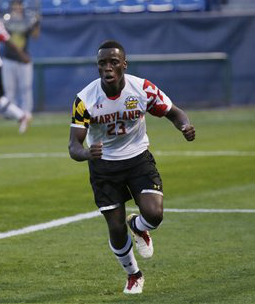 Steady progress has been made in the past few seasons under head coach Mike Noonan, though last year the overall record dipped below the .500 mark. The Tigers did show some spunk in the ACC tournament, upsetting Boston College and taking Maryland into overtime in the semifinal.

There is an intriguing amount of returning quality, though the team will have to replace leading scorer Austin Savage, who scored eight of the team’s 22 goals in 2012. Up front, Ara Amirkhanian and Manolo Sanchez are both options to provide goals, along with sophomore forward TJ Casner. Phanuel Kavita is a steady presence at the back, and there’s an intriguing freshmen class coming in as well, with Thales Moreno, Alexandre Happi and Mauriq Hill joining the Tigers from the vaunted Montverde Academy in Florida.

Is highly rated recruit Brody Huitema the answer to Duke’s scoring woes from a year ago? The incoming freshman scored goals in bunches for the Vancouver Whitecaps Academy side, and he’ll look to inject life into an offense that did scored just 20 goals a year ago. With one of the best defenses in the country in 2012, the final record could have been much better if the offense didn’t sputter as much as it did.

The loss of starting goalkeeper James Belshaw is a blow to hopes of being just as stout defensively, but with center back Sebastien Ibeagha returning for his senior season, it’s a huge piece, while midfielder Sean Davis has developed nicely in two seasons in Durham. Along with Huitema and bringing in a new goalkeeper, Nick Palodichuk’s health is a big wild card. If he can stay fit, Palodichuk offers a talented scoring option, while rising sophomore Luis Rendon has talent but struggled to log heavy minutes last season. There’s every reason to believe that Duke is going to be an improved side this coming season.

It was quite the year for the Terps in 2012, and when the Hermann Trophy winner returns, it’s a great starting point for a repeat run at a spot in the College Cup. Hermann Trophy winner Patrick Mullins’ decision to come back for his senior season is certainly welcome news to head coach Sasho Cirovski as he once again chases a national crown.

The return of Mullins and Schillo Tshuma up front provide ample firepower, though the focus is going to be on Maryland’s back line, as freshman Zack Steffen earned the starting spot in goal heading into the season, while fellow first year defenders Alex Crognale and Suliamen Dainkeh are both expecting to feature in the starting lineup. So depending on how the youngsters cope with the new level is likely to dictate how far the Terps can go this year.

Another program that has made significant strides forward, life was rosy for the Wolfpack outside of the ACC in 2012. But in it, wins were elusive and after starting off the season with six straight victories, the Wolfpack struggled to the finish line.

Alex Martinez (11 goals, 10 assists) enters his senior season with the chance to prove his pro credentials, and there is new talent entering that could have a big impact, including spring enrollee Travis Wannemuehler and transfer Holden Fender. Both players have experience with various U.S. youth national teams and will look to make an impact in the ACC.

The losses of midfielders Mikey Lopez and Danny Garcia represent two big holes in a Tar Heels lineup that suffocated opponents with possession and a tenacious defense. Provided replacements for those two can be located, along with a new starter in goal after the graduation of Scott Goodwin, the defense could be just as good as it was in 2012 when it conceded only seven goals. Starting center backs Boyd Okwuonu and Jonathan Campbell return to reprise their role at the heart of defense.

Assuming that the team can retain that high level of quality at the back, it’s just a matter of where the offense comes from. Andy Craven is back after scoring six goals and chipping in five assists, while Robbie Lovejoy can provide a flank threat if he manages to stay healthy. Of the new arrivals, forward Tyler Engel (transfer from SMU) looks like he’ll be a key contributor right away, while Jamaican youth international Omar Holness is going to be one of the candidates to replace Lopez in the midfield., Colton Storm and Jalen Markey represent wild cards who could end up playing significant roles this season.

The Fighting Irish are jumping into the ACC after losing their two best players from a year ago (Dillon Powers and Ryan Finley) – a precarious thought for most programs. But Notre Dame seems equipped to cope with that jump in reasonable fashion, with eight returning starters.

At first glance, it would seem the defense is set to be the team’s main strength, with all four defenders back, including senior linchpin Grant Van De Casteele. Sitting in front of the back four is Nick Besler, developing into a top defensive midfielder. While Finley’s goal scoring will be missed up front, Harrison Shipp is back and can provide a reliable scoring option. If it all comes together and the team stays healthy, the Irish could definitely find a way to finish at the top of the standings.

After swapping the Big East for the ACC, the Panthers seem the least likely of the new teams to be able to keep pace with their new counterparts, after going winless last year in conference play. Long time head coach Joe Luxbacher enters his 30th season in charge, seeking his first double-digit win season since 2000.

Luxbacher has players from last year to work with, while also bringing in a class of nine new freshmen. The returners including last season’s two top scorers in Nico Wrobel and Nick Wysong, while bench player Chu Chu Onyeukwu has shown signs of offensive ability in exhibition games. 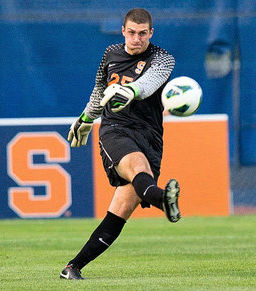 There’s no doubting that the Orange had a breakthrough season in 2012, advancing to the Sweet 16 of the NCAA Tournament before losing in a shootout to Georgetown. What can they do for an encore? The team did lose its top two leading scorers, as Jordan Vale transferred to UCLA and Lars Muller graduated. Forward Tony Asante should be able to help cope with their departure, while sophomore Stefanos Stamoulacatos is a quality option as well. Freshmen additions Chris Nanco and Alex Halis, high school teammates from the Toronto area, could also slot in and offer an offensive punch.

Sophomore goalkeeper Alex Bono is the team’s cornerstone at the back, and the second-year netminder will get the opportunity to backup the notion that he is one of the best shot-stoppers in the college ranks with the move to the ACC. Canadian youth internationals Skylar Thomas and Jordan Murrell will look to boost the defense, though Thomas will need to stay healthy after missing half of last season through injury.

Last season’s young Virginia squad managed to find its way into the NCAA Tournament despite an up-and-down campaign. If the significant number of returners can take another step forward, the addition of one of the nation’s best recruiting class certainly has the potential to do some damage in both the conference and on the national level. Former U.S. U17 MNT defender Zachary Carroll anchors the team’s defense, and the center back needs to prove he can stay healthy after missing a handful of games last summer. Provided he can remain on the field, he could assert himself as one of the nation’s best center backs. In goal, Creighton transfer Jeff Gal takes the starting spot after Spencer LaCivitia had to undergo hip surgery this year.

The attacking options at George Gelnovatch’s disposal are plentiful. U.S. U18 MNT midfielder Jordan Allen is likely to see time on the wing, while Nicko Corriveau is another new addition who will look to make a splash at an attacking midfield spot. Forward Darius Madison is likely to lead the line from the No. 9 spot, while Todd Wharton, Marcus Salandy-Defour, Brian James and Ryan Zinkhan are all quite capable of troubling opposing defenses. Gelnovatch certainly has the talent on paper, it’s just a question of how the pieces all fit together on the field.

Life outside the ACC went quite well for the Hokies last season after a 7-3-2 mark. But once the conference schedule came around, the team couldn’t muster more than a single draw from their eight games in ACC play. This year, the challenge becomes greater with more teams in the fold, but there is experience to count on, including goalkeeper Kyle Renfro, last year’s top scorer David Clemens and forward Daniel Lauretano. Clemens, who scored 10 goals in 2012, needs a bit of help if the Hokies are to notch wins in conference, as no one else on the roster last season managed to score more than two goals.

Another talent-rich squad looking to return to national prominence, there are plenty of pieces in place to make that happen in 2013. Forward Sean Okoli continues to blossom into a quality option up front after an 11-goal campaign in 2012, and sophomore forward Michael Gamble provides a target man for Okoli to play off of, while Andy Lubahn is back after an injury-shortened season last year. Their supply line took a hit when Collin Martin elected to sign with D.C. United instead of return for his sophomore season, but the addition of recruits like Ian Harkes and Jacori Hayes in midfield should soften that blow, not to mention senior Luca Gimenez.

Defensively there are questions the Demon Deacons must contend with, including who starts in goal after Michael Lisch’s graduation, while Anthony Arena and Danny Wenzel are both gone as well. Sophomore Jalen Robinson is likely to start along the back line again, while fellow D.C. United Academy alumni Rafael Fagundo is a hulking option as well who will look to step in and contribute as a center back.