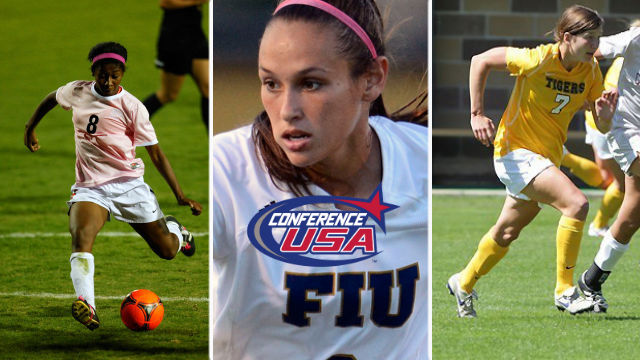 While every conference in Division I college sport has seen its share of changes, few can compare with what the Conference USA went through in women’s soccer.

The rundown? Starting in 2013, FAU(w), Florida International, Louisiana Tech, Middle Tennesee(w), North Texas, Old Domnion(w) and UTSA are in, while the conference saw the departure of UCF, Memphis, Houston and SMU.

As a result, 16 teams are now competing in the conference, and in the 2013 season, will be split into East and West Division. With so many new faces, it makes it all the more difficult for coaches to know what to expect this coming season.

Making the move to the CUSA from the Atlantic 10 where they were a middle of the pack finisher there, the 49ers could definitely compete for East Division honors. Leading scorer Amanda Jones is among the most notable returners, while seniors Sarah Ann Waugh and Brooke Mulloy both bring plenty of experience and will look to provide a stable platform for the team to build off of in 2013. In all, eight returning starters are back.

Arguably the most complete team in the conference, the shifting should have little impact on Colorado College, a program that has certainly made a swift rise under head coach Geoff Bennett, last year’s CUSA Coach of the Year. Led by All-American midfielder Jessie Ayers, the Tigers secured a regular season conference crown (sharing it with Rice), and were voted preseason favorites for the title according to a preseason coaches poll. The Tigers are far from a one player wrecking crew as well – Ayers is the heart and sole of the midfield, but Madison Whitehead provides a nice compliment, while senior defender Kecia Morway anchors the back line.

The Pirates put together a solid campaign a year ago, but now must cope with the loss of big pieces, such as First Team All-Conference goalkeeper Christiane Cordero and defender Hali Oughton, along with top offensive producer Chrissy Gratz. There is experience to help plug those gaps, of course, especially at the back, with the return of defenders like Haley Patsey, who showed admirably during her freshman year, and Kelly Miller, who is entering her junior year. Up front, a healthy Lexi Miller should be able to carry a larger portion of the offensive load, while Kendall Frey is another second year player looking to build off a strong debut season.

Entering the CUSA from the Sun Belt Conference, FIU has plenty of promise and in Chelsea Leiva, a potential scoring champ who were look to make a strong impression on her new opponents. Leiva and Scarlett Montoya (combined 20 goals between the pair) were a dynamic scoring duo last season, and as a result the program was voted to finish first in the Eastern Division. The team has plenty of depth to go with the experience of six players who started all 21 games last season, back in the fold for a new challenge.

The conference isn’t the only thing new for 2013 for FAU, as head coach Patrick Backer assumed the reigns of the program at the start of the year. He’ll look to kick-start a team that struggled in the Sun Belt. FAU(w) does have a double-digit goal scorer to call upon in the form of junior striker Claire Emslie, and if she can replicate her lethal form from the spring along with Natalia Hernandez and Alexandra Bentzon, good things could be on the horizon for the Florida program. Emslie has shown that she can get the job against teams in the CUSA, enjoying success against Middle Tennessee and UAB last year.

Another newcomer, Louisiana Tech found life outside of the WAC rather smooth sailing. Things got bumpy when the conference schedule came around, and it’s a memory they will certainly be keen to erase in 2013. An opening game against LSU will be a stiff test likely to prepare them for the rigors of CUSA play. The good news is that of their two leading scorers from last year, Brittany Beddow (six goals, four assists) is back for her sophomore year, though the team has lost significant contributors like Mette Rudolfsen, Mia Schropp, Mo Rockwell and Lindsey Brough. One of the keys to the season will be how a strong group of sophomores, like Beddow and Laura LeFevour, can do for an encore in their second year in college soccer. Head coach Kevin Sherry has already shown once that he can put things together, so the Techsters can’t be counted out despite welcoming 18 newcomers this season.

While the Thundering Herd remain in the same conference, they’ll get another type of new home this fall after the recent opening of a brand new soccer complex. Leading the charge up front will be sophomore Erin Simmons, as the Ohio native surged to six goals and two assists in her debut season. She’ll need to take on an even more prominent role to give her shot at climbing the CUSA standings.

A successful squad last year in the Sun Belt Conference, the jump to Conferenca USA is certain to be a tough challenge for Middle Tennessee. The team lost its top two goal scorers from last year, as both Paige Goeglein (14 goals, 4 assists) and Whitney Jorgenson (9 goals, 7 assists) represent the loss of significant offense. A lot of the pressure of replacing those totals will be New Zelander Kate Loye, who enjoyed a stellar freshman year in 2012. Loye picked up All Sun Belt First Team honors to go with the conference freshman of the year after registering 7 goals and 6 assists. Fellow sophomores Tori Hawkins and Amalie Anderdal are both capable of causing damage and played significant minutes last season.

If there’s one new team that could make a splash in its Conference USA debut season, look no further than the Mean Green. Leading scorer Michelle Young is gone, but there’s plenty of experience returning to tackle the test of a new conference. From early indications, the team will be difficult to score on, backstopped by junior goalkeeper Jackie Kerestine, and buoyed by defensive mavens Kelsey Hodges (who can do some damage offensively with 23 career goals) and Tori Adame. Youth is the key up front, as sophomore forwards Karla Pineda and Amber Haggerty combined for 15 goals and 9 assists last year and can certainly help the team move on from Young’s scoring abilities. It’s going to be a tough non-conference slate as well, as North Texas opens up against foes like Wake Forest, Virginia Tech, Baylor and Oklahoma State, a run that surely will prepare them for the CUSA slate.

Ninth place finishers in the Colonial Athletic Association in 2012, the Lady Monarchs are going to be challenged significantly by their conference change. Seniors are far from sparse on the roster, with defenders Nikki Clarke and Amber Cook back in them fix after playing significant minutes last season. If they can get an uptick in production from players like midfielders Jessie Klamut and Taylor Smith, perhaps they can spring a surprise on the CUSA East.

There’s no question that Conference USA shed some of its upper-tier talent with the departure of both SMU and Memphis, opening the door for a program like Rice to jump in amongst the contenders. They’ll hope to get even more out of their sophomore forwards Lauren Hughes and Holly Hargreaves after the pair accounted for 19 of the team’s 25 goals in 2012. Midfielder Quinny Troung provides a dynamic presence in the midfield that can open up spots for Hughes and Hargreaves, Jasmine Isokpunwu and Hayley Williams will look to anchor the team further back.

Despite struggling through last season, there is experience and guile on this squad that could secure an improved campaign in the upcoming slate. Guided by seniors like Chelsea Cruthirds, Danica Roberts and Natasha Lombardo, improving on a one-win conference performance is sure to be one of the main goals this year. There’s a new coach at the helm trying to produce the change, as Mohammed El-Zare took over the program in December 2012.

It’s by no means a stretch to mention Tulsa’s name amongst the list of contenders, not after last season’s run to the conference tournament championship, a path that included a penalty kick win over Colorado College. There’s a total of eight seniors who will look to feature prominently in a final season of scholastic soccer as well, including midfield general Jordan O’Brien, who along with Camille Pelley and Claire Nicholson, will aim to make things happen in the final third. A lot is going to have to come together for the Golden Hurricane, but it’s dangerous to count out a team with this kind of experience.

There’s nowhere for the Blazers to go but up after a two-win campaign in 2012. Junior Johanna Liney is back after leading the team with scoring charts, but the back line is what needs to improve the most after conceding 51 goals in its 19 games last season.

Engineering a .500 finish overall last season, improving in CUSA play is the key to this season for UTEP. The good news is that opponents that inflicted defeats in 2012, such as Houston, UCF and SMU are out the door. But that’s certainly not what UTEP will hope to rely on, with defender Azia Nicholson back in the fold for her senior year. While Nicholson is sure to help provide stability at the back, improvement will hinge on tabbing a replacement for graduated leading scorer Tess Hall, who made a lot happen in the final third. Seniors Jade Babcock and Tori Martyn are two candidates to help pick up the slack.

Joining Conference USA after one season in the WAC, the new environment of the CUSA West Division is going to be quite the challenge for the Roadrunners, especially after its top two scorers in 2012, Maria Jose Rojas and Simone Boye are both gone. Regardless of what happens, this year’s team is young, with only two seniors listed on the roster – Norwegian defender Anka Grotle will be one of the key figures at the back as one of the two four-year players, while midfielder Laylla da Cruz will also need to come up big if UTSA hopes to spring a surprise or two.