It’s always a close race in the Ivy League, with just about any team able to compete for the conference crown on a yearly basis.

Last year, Princeton ruled the roost, sweeping their way to an undefeated mark thanks to a torrid offensive season by now-NWSL rookie standout Jen Hoy. The likes of Harvard, Penn and Dartmouth look poised and ready to once again mount a challenge in the upcoming women’s Ivy League season.

After managing just a lone win in Ivy League play last year, the Bears look to bounce back and into contention. Finding ways to score more goals – they managed just 15 tallies last season – is critical to those aspirations. Returning First Team All-Ivy midfielder Mika Siegelman was named the team’s captain earlier this year, and will look to cap off a fine career in the fall. Also providing experience and game-changing ability are defenders Annie Gillen and Emily Wingrove. 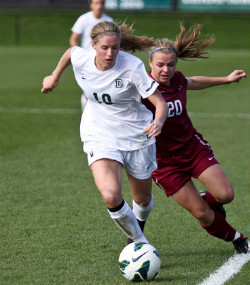 Another squad looking for improvement in the Ivy League slate, the Lions weren’t far off from a much different conference season. Of their 2012 Ivy losses, all four came by just a single goal. Looking to help re-write those games in the coming season are experienced and decorated players likes forward Beverly Leon, defender Catherine Troup and goalkeeper Grace Redmon.

Improving at both ends of the field is paramount for Cornell to progress past a winless Ivy campaign in 2012. Second year head coach Patrick Farmer will have to find the right buttons to push after getting outscored 42-16 a year ago. Midfielder Claire MacManus is one of the most experienced returners, and will look to pair well with senior midfielder Rachel Nichols to turn the 2013 campaign into one of significant improvement from a results perspective in and out of the conference.

Denied an at-large spot in the NCAA tournament in 2012 after a very solid campaign, the Big Green made huge strides forward last fall under second-year coach Theresa Romagnolo and will look to try and knock the Tigers off their perch. The former Stanford assistant, Romagnolo has amassed some talented players that return for 2013, including Ivy League Rookie of the Year midfielder Corey Delaney, midfielder Chrissy Lozier, goalkeeper Tatiana Saunders and defender Jackie Friedman. There’s little doubting their ability to compete for the crown this fall.

One of the annual contenders for Ivy League honors, the Crimson is looking for a fourth league title in the past six seasons this fall. Along with plenty of senior leadership, in the form of captains Elizabeth Weisman and Peyton Johnson, Harvard also landed a huge coup with the commitment of U17 Women’s National Team forward Margaret Purce. The youth international could be the weapon Ray Leone’s side needs to reclaim the crown.

After finishing six points off the top, the Quakers should be right in the mix again this season, as head coach Darren Ambrose has a nice blend of experience and youth that will be trouble for opposing Ivy League sides. Returners include last year’s leading scorer Kerry Scalora (four goals, three assists), who will surely aim to up her offensive production this year, and she’ll also serve as captain along with fellow seniors Brianna Rano and Claire Walker.

Wearing the target on their back this fall will be the Tigers, who didn’t drop a single game in league play, running the table while outscoring Ivy opponents 20-7 in the seven wins. Top scorer and 2012 Player of the Year Jen Hoy was one of five All-Ivy seniors to gradute, but forward Lauren Lazo (11 goals, five assists last season) should be able to assume a lot of the burden, along with Diane Metcalf-Leggette and Gabriella Guzman, who will look to defend their talent after teaming up with a promising recruiting class.

Things in conference play didn’t quite work out for the Bulldogs despite some positive performances in 2012 outside of the Ivy League. Freshman Rachel Ames returns after winning the starting job in goal in her first season, providing a solid starting point defensively. Along with Ames, plenty of other first year players saw significant minutes, with Shannon Conneely, Ally Grossman and Christina Bradley all gaining valuable experience. Offensively, juniors Muriel Battaglia and Melissa Gavin will both look to grow into more prominent roles in the absence of the graduated Kristen Forster, who led the team in goals scored last year.