The Summit League was reformed after last season's nationwide series of conference convulsions. The league was set to go with eight teams after swapping UMKC for Denver, but Oakland delivered an unwelcome surprise by pulling out for the Horizon League on May 7. The decision came after the league set its conference schedule, meaning Summit League squads suddenly have a nonconference game against Oakland smack in the middle of league action. Not to mention the site of the conference tournament had to undergo a shift back to Western Illinois as well.

Oakland won the regular season title last season, so there's guaranteed to be a new champ in 2013. While Denver zeroes in on its new conference foes, remaining fighters like Western Illinois, Nebraska-Omaha and IPFW(m) look to defend home turf.

Denver makes the switch over from the MPSF, where they finished in the top half during the regular season. They'll immediately be one of the favorites to win the Summit League out of the box. Denver's chewy nonconference schedule includes Charlotte, San Diego State and Cal Poly, which should go a long way toward preparing the team for a brand new conference with unfamiliar foes. Denver loses five seniors from last season, so the unfamiliarity could stretch closer to home as well. 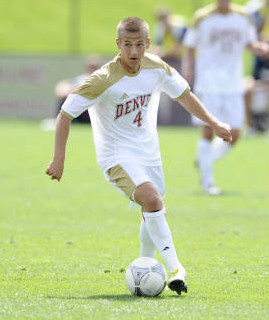 The conversation about Denver's on-field bonafides begins with local kid Zach Bolden, a talented senior midfielder with experience playing for the Colorado Rapids U18 academy team. His 10 assists last season were seventh nationally, and his five goals (two of those match-winners) helped cement his status as first team All-MPSF player last season. As a creator and midfield general, it won't get any better in this conference. Fellow midfielder Brian Hoyt should cement Denver's midsection as its strength. His starts figure to skyrocket in 2013 after a campaign in which he contributed four goals and an assist in just 923 minutes as a sophomore.

The Leathernecks had a solid regular season, but they caught fire in the conference tournament, which they won for a second straight year. Despite opening the conference slate 1-2-2, Western Illinois went 4-0-2 in their last six games to win the Summit League's bid to the NCAA tournament. They scrapped hard in a 1-0 loss to Northwestern in the first round.

Western Illinois has been to the NCAA tournament six times in the last nine years, so the expectation is baked in from the start. Much of the work this season will revolve around finding a replacement for the graduated Nathan Bruinsma, whose eight goals last season were almost half of the entire team's total. Erick Bloom was a pleasant surprise as a freshman last year at forward, and he led the team during its spring season with three goals in six games. Midfielder Husref Jupic missed last season with an injury but was salty in the spring, and midfielder Oscar Ortega emerged late last season as a solid contributor.

The Mavericks are relative newcomers to Division I after making the jump from Division II in 2011. As part of that move, the school added a men's soccer program for the first time. They won three conference games last year in a sure sign of improvement, and the return of a massive 10 starters in their third season in DI should be a huge boost for a brand new program.

Senior forward Craig Buettner is a product of the program's beginnings after making it through a 160-player tryout in 2011 to make the team. He arrived as a key player last season, as Buettner scored three goals and provided two assists in 10 starts. Still, most of Omaha's progress won't be judged by on-field results. The team won't be eligible to participate in NCAA postseason play until 2015, meaning the next two seasons will be used almost entirely as learning tools.

The Mastodons' 2012 record isn't flattering, but it also masks a late-season rise. IPFW lost its first 11 games of the season and got a month and a half into the year before notching its first win. But that started a streak of four wins in their last six, which helped the Mastodons elbow into the conference tournament for a second straight year.

The good news is that opportunities to replicate the late-season surge and to leave the early-season swoon in the dust are plentiful. The team returns 82 percent of its scoring from last season spread between six players. That's the positive. The negative is that the Mastodons only scored 17 goals in 20 games last year. By the same token, opponents scored 47 times. Corey Tom was one of the team's most productive players last year after bagging four goals. If the team can up its offensive output, it can reasonably expect to get back to the conference tournament for a third time in a row and perhaps make some postseason noise.

Most of the heavy lifting done, IUPUI simply needed results in its last two games to make the conference tournament. But back-to-back losses to UMKC and IPFW doomed the Jaguars to end their season right there. It was a tough way to close a season that was on the rails just a week earlier.

Four starters return from that six-win team, and none have a bigger role to play than Eduardo Cortes. The keeper made 98 saves and notched a 1.34 goals against average last season to take home the league's keeper of the year honor. The Jaguars will build around him after he put in five shutouts in his 16 appearances. The defense will be the team's strength, as sophomore defenders Michael Sass (three goals, four assists) and Clint Hoffar (three assists) are both coming off promising freshman campaigns. Upperclassman forwards Ian Block and Gregory Efiom will be expected to carry a good deal of the scoring load.

New management arrived for Oral Roberts in 2013. Ryan Bush flipped over from the Oral Roberts women's team, which he coached for five years and led to a 42-44-6 mark. Longtime men's coach Steve Hayes resigned his spot, meaning the Golden Eagles will have a new look this season. Even if Bush imports many of the old tactics, there will probably be some kind of adjustment period as Bush looks to make his own unique mark on the program.

Many of the club's key contributors from a year ago are back, leaving Bush with a stocked cupboard to work with as he imparts his own particular brand of soccer. Tom Adams was a handful a year ago with a team-leading five assists, and he returns for his junior year a more accomplished forward. Part of the midfield's creative mechanism is back in Gerardo Salas, who had a team-high six assists last year. The creative No. 10 will be relied upon to help Oral Roberts up its conference win total from last season.

Not a whole lot went right for Eastern Illinois once the schedule ticked over to Summit League action. The Panthers went on a six-game losing streak at the start of conference play, their only win for the rest of the year coming in dramatic fashion with a 3-2 overtime thriller over IPFW on the back of a Jake Plant goal with one second to play. Eastern Illinois got one more encouraging piece to finish on when it drew conference champion Oakland 0-0 in its final game. The Panthers didn't  make the postseason conference tournament, but it wasn't a bad way to go out considering the previous month and a half.

Eastern Illinois men's soccer is celebrating its 50th anniversary this season and hopes to make it a memorable one. Only three players played and started in all 17 games last year, and all three are back. The aforementioned Plant returns to his station in the middle of the park, while midfielder Jake Brillhart and forward Garet Christianson return to bolster the spine. Christianson had a pair of goals and assists apiece last season. The Panthers only scored six first-half goals last year, and they'll have to start faster if they hope to climb out of the Summit League cellar this season.