The Cavaliers had a record-setting season in 2013 with 78 goals and a goal differential of +62 overall. A loss in the NCAA semifinals and being bounced from the ACC tournament left UVA without postseason hardware. Midfield maestro and reigning Hermann Trophy winner Morgan Brian is back for her fourth year, though if she’s involved with the full U.S. Women’s National Team her availability might be slightly limited. Speedster Makenzy Doniak is also back after her 20 goal campaign, as are defender Emily Sonnett and goalkeeper Morgan Stearns. Head coach Steven Swanson does have his work cut out to come close to the heights of 2013 after losing eight players from last season to graduation. 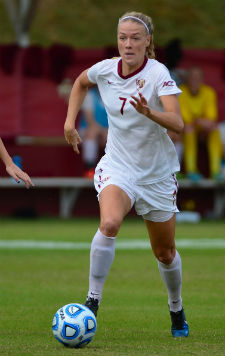 A third straight College Cup appearance didn’t yield a national title, so head coach Mark Krikorian is ready for another run at postseason success. If there was one thing the Seminoles lacked last year it was a big-time forward to handle the scoring load. They have one now in Vanderbilt transfer Cheyna Williams, who must show she can beat ACC defenders. While goalkeeper Kelsey Wys and defender Kassey Kallman are gone, there is plenty of quality back.

Midfielder Dagny Brynjarsdottir is a Hermann Trophy contender and an elegant and classy attacking mid who can score and set up teammates. Outside back Megan Campbell is a lockdown option on her side of the field, U.S. U20 mid Nickolette Driesse offers substantial depth and center back Kristin Grubka is poised to be the team’s defensive leader.

Some big name departures from last season’s team create a few issues the Tar Heels must address. Offensively, Kealia Ohai and Crystal Dunn and their 25 goals from last year are gone, while defensive contributors Anna Sieloff and Megan Brigman graduated. There is offense waiting in the wings, of course, given the level of past recruiting classes. It’s a big opportunity for U.S. youth standout Summer Green, in her junior season, to shine, while other young, promising attackers like Emily Bruder, Joanna Boyles, Amber Munerlyn and Megan Buckingham have plenty of talent and can pick up some of the scoring slack.

Last season was a special one for head coach Chugger Adair and his charges, making it all the way to the College Cup, only losing at the hands of ACC foes Florida State. Some big pieces from that team are gone, including explosive forward Jazmine Reeves and steady goalkeeper Dayle Colpitts. Quality remains that is capable of keeping the Hokies close to the ACC summit, including midfielders Katie Yensen, Ashley Meier, defender Jordan Coburn and rising sophomore standout Murielle Tiernan.

Randy Waldrum’s departure at the beginning of the calendar year was a shocking development, as he left to take over the head coaching role with NWSL side Houston Dash. Theresa Romagnolo landed the coveted role, coming over from the Ivy League looking to take a talented team close to the top of the ACC standings. Romagnolo inherits a stocked roster, which includes U.S. U20 WNT standouts Katie Naughton and Cari Roccaro, who could reprise their role in central defense that they play for the USA.

Midfielder Morgan Andrews is coming off a Freshman of the Year campaign and was named to the All-ACC Second Team, and is sure to be primed after being snubbed from the U20 World Cup roster. Also returning to help fire the offense is Lauren Bohaboy, who tied Andrews for team lead with seven goals. Romagnolo has added the No. 6 ranked recruiting class, and there’s no doubting that the roster has the required players to be in the mix in the rigorous ACC in 2014.

A freak injury to rising junior forward McKenzie Meehan hangs over the 2014 season after it knocked her out of the U20 Women’s World Cup. Forward Stephanie McCaffrey does return for her senior season, meaning there would be someone left to fill the void that Meehan’s possible absence would leave. Sophomore forward Hayley Dowd is a candidate to help pick up Meehan’s slack, should she miss a significant amount of time, while senior defender Casey Morrison is another key returning player.

Despite boasting an extremely deep and experienced team, the Blue Devils’ 2013 campaign was slightly disappointing, finishing with a .500 record and battling some substantial injuries. However, they did come one loss shy of making the College Cup, and welcome in the No. 3 ranked recruiting class. This season will be determined by how the young stars step up to the plate, including sophomore Antoinette Payne, Christina Gibbons and Rebecca Quinn. Newcomers like Imani Dorsey and Casey Martinez need to have a big impact offensively in order for Duke to contend in what is an always talented ACC.

Like many of their peers, the Demon Deacons must replace a pair of All-American performers, as the graduations of Katie Stengel and Aubrey Bledsoe are big losses. Head coach Tony da Luz has been here before however, and welcomes in a solid freshmen class that should be able to plug holes. He also gets back midfielders Sarah Teegarden, who is only a sophomore, and Riley Ridgik, who is one of the team’s most experienced and important players.

Slowly but surely, head coach Eddie Radwanski has the Clemson Tigers climbing the standings in the ACC. After a couple of strong recruiting crops, is this the year the program takes another step forward? Bolstered in goal by sophomore netminder Kailen Sheridan, and at the back by Claire Wagner, the team conceded just 18 goals in 19 games. Scoring was troublesome, however, as the Tigers bagged half their season output of 28 in one game (a 14-0 win against Alabama A&M) and they were blanked seven times the rest of the season. Midfielder Catrina Atanda scored in both preseason games, perhaps a sign of things to come.

Heading into her second season in charge of the Hurricanes, Mary-Frances Monroe continues to put her stamp on the ACC program. Getting a big season out of senior forward Ashley Flinn, who scored ten goals a year ago, is one of the keys to closing in on an NCAA tournament spot. An eight player recruiting class offers up a number of new faces, including English forward Grace Rapp and Canadian Ronnie Johnson. 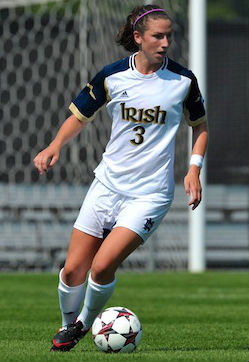 One of two newcomers to the conference in 2013, the Orange are another team looking to make a move in what will always be a crowded league. It’s still a relatively young group featuring mostly freshmen and sophomores, but they bring back returning contributors Erin Simon and Stephanie Skilton who both should make a significant impact once again. Provided they can adjust and win a few more games in conference, Syracuse could be a surprise package in 2014.

Another program looking to jump-start a turnaround, head coach Tim Santoro’s Wolfpack managed just a pair of wins in the ACC last season. The squad enters 2014 looking to improve behind the strength of a young but talented roster receiving an injection of newcomers like German youth national teamer Franziska Jaser, not to mention the return of sophomore Jackie Stengel.

Second-year head coach Greg Miller rounds out the teams aiming for a rebuild, and he’ll look to move a Pitt squad forward after a winless first season in the ACC. Improving both offensively and defensively is crucial after the team scored 13 goals and conceded 41 in 19 games last year. Twelve freshmen are on the roster, including four from north of the border in Canada. Will that move the needle?

The addition of the Cardinals to the ACC should prove to be beneficial. Karen Ferguson-Dayes has a done a good job in her tenure to help the program punch well above the .500 mark on a regular basis. The challenge of this move comes at an inopportune time with the graduation of 2014’s top scorers Charlyn Corral and Christine Exeter. That leaves two big holes to fill, and the loss of 22 of the team’s 48 goals from a year ago will also hurt. Midfielder Erin Yenney returns, and the addition of 12 newcomers will play a big role in this team’s ability to compete with its new conference foes.