There’s just one newcomer of note in the Atlantic 10, ironically taking the number of teams in the conference to 14. Last year, Dayton and La Salle were by far the best according to overall records, not to mention postseason accolades.

Will anything look different at the end of the upcoming season? Hard to say at this point, but there’s no doubt that a few teams will be able to once again separate themselves from the pack.

Up until the Atlantic 10 conference tournament title game, 2013 was a banner year for the Flyers. The high-scoring antics of Ashley Campbell and her 18 goals fired Dayton to a quality record, both in and out of the conference. And while an NCAA tournament bid proved elusive, optimism has to be at a premium once again despite some key losses. Back in the fold for this season is Campbell, who will miss the start of the season depending on how well the Canadian U20 WNT fares in this month’s World Cup, while midfielder Nicole Waters and her 17 assists return. With those two in the fold, the 13th best scoring attack from last year just might not skip too much of a beat. 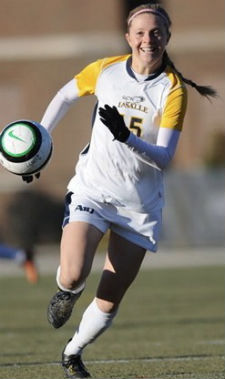 Like their rivals from a year ago, La Salle is coming off a strong season inside and outside their conference. Also similar to Dayton, La Salle has some big names to replace, including Renee Washington and defensive stalwart Courtney Niemiec. Big names return, however, including Kelsey Haycook (15 goals, 11 assists) and Maryam Huseini, who will both be seniors. Their recruiting class includes intriguing adds Kristin Haugstad from the Norwegian Youth setup, and transfer Fia Jonsson, a Swede who comes to the Philly area by way of a stint at Coastal Carolina last season. It’s a combination of experience and new blood that should keep the Explorers near the top

Nine starters are back for the Billikens, who are out to build on an appearance in A10 postseason play last fall, the program’s first since 2009. A non-conference record of 1-8-2 is something that they’ll undoubtedly hope to reverse that trend in 2014. Livi Logan-Wood, the team’s leading scorer last year, is back, and the blend of experience (six seniors) and youth (nine freshmen) should provide a unique blend this coming campaign.

Molly Curry, Lauren Hill and Brittany Charles are three of the team’s key returners who helped drive the team’s attack ahead of another campaign. Eight freshmen join the roster as well, as the Bonnies look to jump up in the A-10 standings.

Goal-scoring issues plagued the Patriots a year ago, an issue that needs to be addressed if the squad can make noise in the conference. Defender Sarah Hardison earned All Rookie Conference honors, while Paige Babel returns for her senior season to anchor the back.

A disappointing finish to the 2013 season turned a promising campaign into a .500 record for the Rams, which lost senior maestro Courtney Conrad (5 goals, 6 assists). Second-year head coach Lindsay Vanderspiegel has added 10 newcomers to make a splash, and she’ll look for Norwegian Maren Johansen to spur the offense. There are other good pieces coming back in defense, as goalkeeper Emma Kruse returns along with defender Casey Boyer.

2013 was certainly a season to build on for the Colonials. While they checked in at seventh place in the conference, a stout defense conceded just 16 goals on the season, a solid foundation. Firing up the offense is critical to making noise this season, and returners like Kristi Abbate, MacKenzie Cowley, Elizabeth Casey and Brooke Bean can will look to maintain the momentum.

Senior forward Brittany Moore landed on the Second Team All Conference team after a strong season scoring eight goals and notching two assists, and she’ll be key to any success the team has in the fall. Defensive improvement is also critical after a 2013 season where the team conceded more goals than they scored.

First Team All Conference standout Mo Hawkins storied career is over, though it looks like the team has a rising star in Emily Gingrich to assume some of the scoring load. She’ll need help for the Hawks to improve, as just six players (including Hawkins) scored last year.

The midseason retirement of star Becca Wann didn’t help the Spiders at all last season, as her decision to hang up her cleats due to concussion issues deprived the program of one of its best players. This year is a new start, buoyed by an incoming class of 10 freshmen, while the team seeks improvement on both ends of the field. Defender Hunter Rooney earned All Conference Freshmen honors.

After winning just once in its first six games of the 2013 campaign, Fordham never really got the momentum needed in the abbreviated college campaign. There’s significant talent returning and a big senior class, including Kelsey Dougherty Howard, Jessica Widmann and Maria Canicatti who will look to trigger an improved campaign.

Entering his third season in charge at the Pittsburgh, Pennsylvania school, head coach Al Alvine has a host of young and promising talent looking to make a breakthrough in conference play. A tough out-of-conference schedule awaits the start of the season, as conference rookie standouts Maddie Layman and Maggie Mayo look to help the team take a step forward in 2014.

Last year was a struggle for Rhode Island, winning just once in the conference. The goal difference wasn’t pretty, scoring 18 times and conceding 32. There are players coming back, including midfielder Samantha Leyh and her seven goals, while Freshman All Conference honoree Samantha Alves anchors the defense. Will it translate to more wins? There will be new talent around with a freshmen class of 11 joining up this year.

Will the Atlantic 10 be kinder to Davidson than the SoCon was? Davidson made the move to its new digs earlier in the season after an up-and-down 2013. There’s a lot back who will make the jump, including sophomore Ashley Finke, an impact player from the bench, while top scorers Sarah Tuggle and Dani Johnson also are back in the fold.