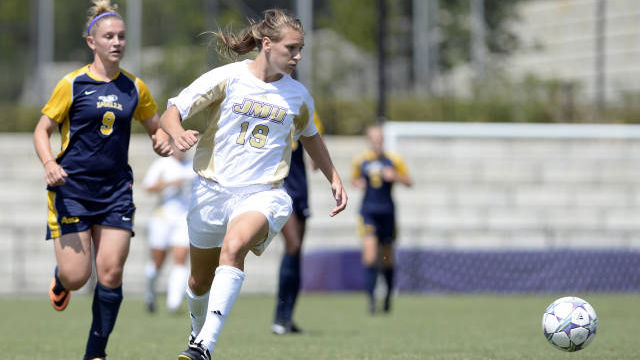 Like other mid-major conferences, the CAA is a wide-open, parity driven league that any number of teams could win. James Madison, William & Mary, Northeastern and Hofstra should compete for the top spots once again, but don’t be surprised to see another team force its way into the race.

Seven starters return to the Dukes from a squad that came one win shy of the NCAA tournament, losing the CAA tourney championship against Northeastern. Ashley Herndon, the CAA Rookie of the Year, will lead the attack after a six assist, five goal campaign, along with Katie Hyland’s last year’s top scorer with nine goals on the year. The loss of Meghan Cox to transfer is a blow to the back line, but Shannon Rano is among the experienced returned who can help make up for that loss. 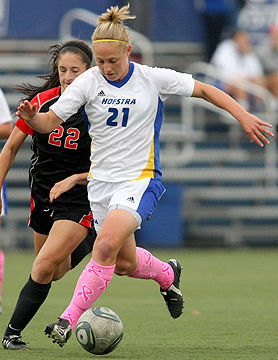 Also returning a slew of talent from a year ago, the Tribe boast senior forward Emory Camper in attack, while goalkeeper Caroline Casey is back in net a year after winning First Team All-CAA honors giving the team an impressive platform at the back. Key players like Emily Fredrikson, Taylor Dyson and Leci Irvin also are back.

A year ago, Northeastern turned it on at the right time, securing an NCAA tournament spot and a first CAA tourney crown since 2008. Starting goalkeeper Paige Burnett is back, along with senior defender Bianca Calderone. A solid recruiting class is highlighted by the addition of U.S. U18 WNT pool player Kayla Cappuzzo.

The two-headed attack of Leah Galton and Sam Scolarici (who combined for 26 goals last season) makes Hofstra perhaps the most dangerous offensive side in the league. Galton returns after winning Player of the Year honors last season, and the Pride is sure to be looking for a stronger finish to the season than they managed in 2013.

Possessing one of the most intriguing rosters in the league, 13 juniors highlight UNC Wilmington heading into the 2014 season. That includes First Team forward Katrina Guillou and Second Team All-CAA defender Morgan Leyble, and Third Teamer Maddie McCormick. One of the keys to improving for this season will be a better mark away from home, as they managed just three wins from 13 on the road last year.

Another team to perform well at home and struggle away, Delaware is a solid outfit that could climb the standings provided they replace a couple of key departures. Gone are All Conference anchors Chelsea Duffy, Shannon Kearney and Dianna Marinaro. Experience remains, and it includes senior defender Allegra Gray, who has earned back-to-back First Team All-CAA honors. Forward Natalie Zelenky score three goals as a freshman and will look to feature even more prominently this season, while midfielder Emily Market is another player to keep an eye on.

The strength of the Dragons is at the back, where seniors Eve Badana (the 2012 Conference Defensive Player of the Year), Alyssa Findlay and Melissa Chapman all return for what will be their final season. However, goal scoring proved to be troublesome last season, as the team managed only 15 total tallies on the year. If that issue is addressed, a top half finish in the CAA is not a bold suggestion.

Replacing the 15 goals of graduated senior Emily Banes is paramount for the Tigers heading into the upcoming campaign. Her outlay represented almost half of the team’s goal total of 35. Defending was the bigger problem that relegated the squad to the bottom of the conference standings, conceding 29 times. Goalkeeper Erin Quinn is back, and she’ll look to be at the heart of an improved back line. Katie Ponce and Natalia Pinkney are also back.

Eleven new faces join a Cougars program that managed just a single point in conference play last season and won just two games overall. Defensively, the team conceded 49 goals overall and shuffled through four different goalkeepers. It’ll probably take a year or two to climb the standings, as the preseason vote indicates (the Cougars were picked to finish last) but if enough young players get opportunities this year, it’ll bode well for the future.

Swapping the Southern Conference for new digs in the CAA, 2013 was a good one for the Phoenix, as Nicole Dennion’s 15 goals helped lead the way. Earlier this year however, Dennion was diagnosed with cancer that forced her to withdraw from school for treatment (donations to help her expenses can be made here). A summer update reported positive news, and it’s sure to leave the squad with extra motivation as they return to the field for the 2014 campaign.