How will the women’s NCAA tournament end up? Below is a look at TopDrawerSoccer.com’s picks for the 64-team tourney that kicks off on Friday.

Tell us how wrong we are in the comment section below. 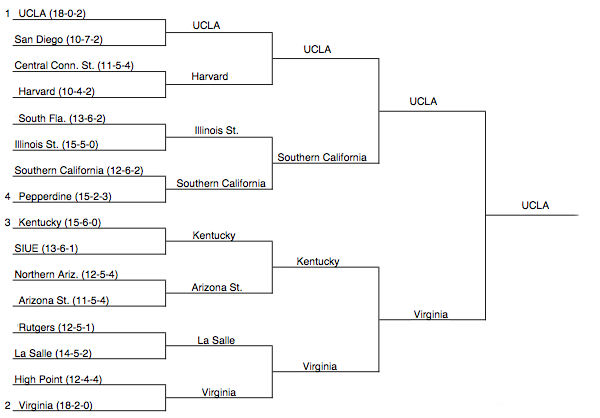 Pick against UCLA at your own risk. With 13 weeks at No. 1 and a senior laden team featuring Sam Mewis, Katelyn Rowland, Abby Dahlkemper and Sarah Killion, the Bruins are favorites to navigate their way through their corner of the bracket.

A third round matchup with USC or Pepperdine could be a tricky test, while on the other side, Virginia and Kentucky will vie for quarterfinal honors. The presence of the Cavaliers in the same side of the bracket as UCLA is unfortunate after last year’s memorable College Cup semifinal. 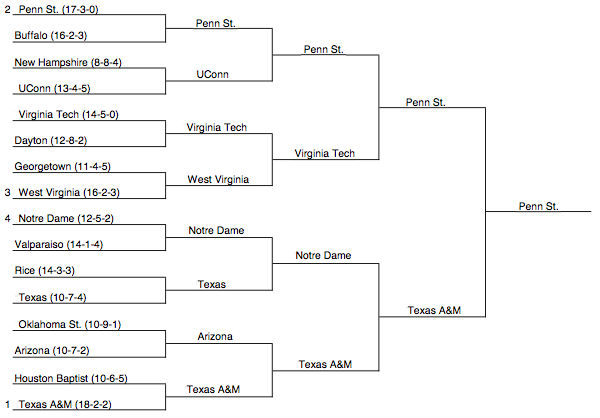 Speaking of senior-laden teams, Texas A&M has experience and talent, but also a tricky run of games. A second round meeting with Arizona could spell doom for the SEC side, especially if Pac-12 team really shine in the tournament, while a potential meeting with Notre Dame isn’t easy.

Second-seeded Penn State might have come up short in the Big Ten tournament, but they are the pick here against a field that includes Virginia Tech and West Virginia. The blend of youth and experience, guided by the savvy Erica Walsh, means that the Nittany Lions rise their game at the right time of the year. 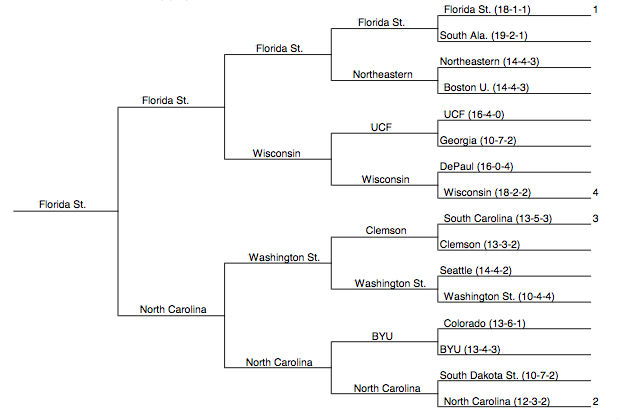 The road to Boca Raton for the ACC’s two best teams in 2014 means that just one of them can make it to the College Cup. And the pick here is the Seminoles. Midfielder Dagny Brynjarsdottir leads a team that has been a top 5 program all season, and as long as the goals dried up the Seminoles should be able to progress.

North Carolina’s form in this tournament is something to keep an eye on. The Tar Heels came up short against Virginia in the conference semifinal, and are likely to be tested from the second round onwards against tough opposition.

If you’re looking for a sleeper from this corner, Wisconsin has the looks of a team equipped to make some noise. Provided that they can best DePaul in the first round of course. 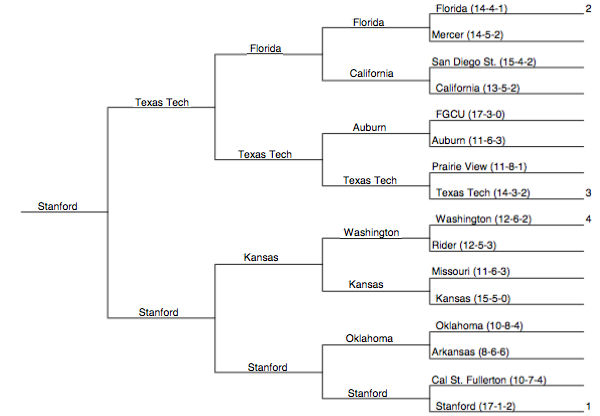 With a stout defense and balanced attack, the Cardinal is the pick to progress as the favored top seed. It won’t be an easy road, with the other seeds Washington, Texas Tech and Florida aiming to make life difficult for them. Stanford’s projected road has a Big 12 feel, with games against Oklahoma and Kansas, followed by a quarterfinal against Texas Tech.

Florida is the wild card here. Tournament success has proved elusive of late, but with Savannah Jordan and Havana Saloun leading the offense, plus the added fuel of a College Cup in state, the Gators can do some damage. 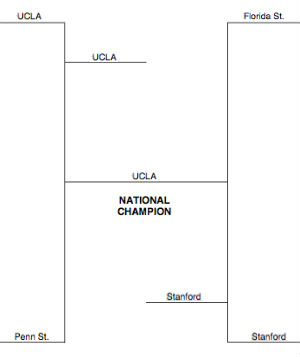 Assuming that UCLA, Penn State, Florida State and Stanford all make it this far, who would win? An all Pac-12 final seems like a safe bet, considering how good the conference has been, not to mention the dominance of both the Bruins and the Cardinal in 2014. The Bruins would have enough left to see off Penn State, while FSU could end up empty-handed once again in the tournament.

The pick for the final is UCLA. It wouldn’t be an easy matchup with Stanford by any stretch of the imagination, but as noted before, the Bruins have played the best soccer all year, and there’s no reason to think that will stop in December.