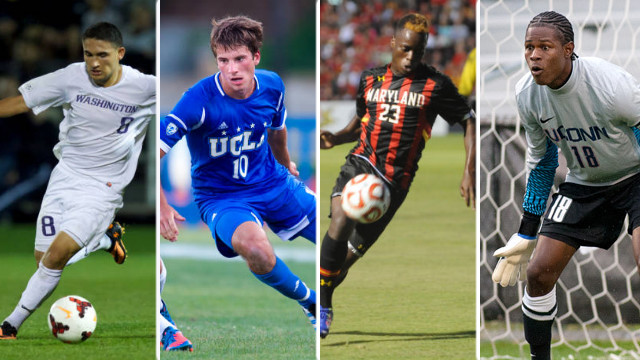 A few weeks ago, TopDrawerSoccer offered its recommendations to MLS for the 2014 Generation adidas class.

The shifting landscape of MLS academies means the pipeline for talent via a GA deal is getting smaller and smaller, as many of the best underclassmen are tied to MLS teams even after entering school.

Between 5-8 players should end up inking deals prior to January’s draft. Given the lack of top-end prospects available, don’t be surprised to see a small class (think five players) eventually signing.

The list below ranks some of the prospective talent in the conversation for a GA deal, how they may project in MLS, and offers a brief scouting report on the top 10 of the group below. Note that underclassmen with ties to MLS academies aren’t included.

The Jamaican international is a mouthwatering prospects, at least when you look at his physical tools. A tremendous athlete with unbelievable reflexes, he can produce more than one or two game changing saves per game, and is in a position to compete for a starting job next season. His mentality and maturity are a work in progress, as he can be prone to an on-field outburst and his decision-making can be called into question.

Let’s preface with the normal disclaimer that Stolz seems set on acquiring his degree prior to starting his professional career. With that out of the way, the German midfielder offers plenty for MLS teams and would likely step into the starting lineup for a handful or so franchises tomorrow. Stolz is similar to Colorado Rapids’ Dillon Powers. He has a big frame, can handle a challenge, strikes the ball cleanly, and reads the game really well. His ceiling might be higher than the former Notre Dame man though, as Stolz can cover more ground.

It’s been a down year for the forward from Zimbabwe, but the raw talent and possible upside on Tshuma makes him a tantalizing prospect, reminiscent of Steve Zakuani prior to his injury. Tshuma possesses speed to get behind even the quickest of opposing defenses, makes smart runs, and even has potential to slide out as a winger at the next level -- provided he works on his passing and defensive work rate.

It’s been a dream year for Roldan and it’s hardly over. The freshman from Southern California burst onto the scene with the Gatorade Player of the Year award and then rode that tidal wave of support into a Pac-12 Freshman Player of the Year award. He is a hard-worker with a sublime first touch. Better yet, he is not afraid to get stuck in on a challenge and put the opponent on his heels. Roldan will find his way to MLS (or another professional league) in the future, and will likely make a big splash there as well. His professional comparison would fall somewhere in the range of Alejandro Bedoya.

There are good parts of Dean’s game that really make MLS coaches smile - he is a beast in the air, he makes forwards eager to find the bench, and he can command a pretty solid back four. There are other parts that are not quite as developed - he struggles with distribution especially against high pressure from an attacking midfielder. However, Dean will improve with that in time. He has shown that he can hit a pretty great dead ball with his success in dead ball situations this season. Dean, if he does make the jump, is coming out as a more skillful Chris Schuler. Reaching Schuler’s current level will take finding the right home though.

Projected as a right back at the professional level, Miller played as a center back this season for the Bluejays. He’s probably the closest to a sure-fire pro of the current crop of GA candidates, though he doesn’t have as high a ceiling as others. Doesn’t wow anyone with his speed but has pace to shut down swift attackers and can get forward well enough to contribute to the attack. His experience with the U.S. U20 MNT this summer adds another valuable asset to his strong resume.

The best indictment of Amick’s quality has been his ability to keep former U.S. U20 MNT defender Javan Torre on the bench this season with the Bruins. Amick is a very intelligent player who makes the most of his attributes in any given situation. He is smooth on the ball and tough on the challenge. Amick is likely to be in the mix with the next crop of U20s for 2015.

A central midfielder who plays deep for the Cardinals, Hairston is a steady prospect who could flourish in the right role at the next level. He’s calm when in possession under pressure, makes very good decisions and is a solid passer. Not only that, he’s not afraid to do some of the dirty work in the middle of the field, something that most MLS coaches value. He can also get forward and jump into the attack when needed, but goals and assists aren’t his primary function for Louisville.

The Ontario product transition to the Division I level at UConn has been seamless. Has the frame (6-foot-2, 190 pounds) and athleticism to be an impact player at the professional level. A bit more on the raw side, as he would need to learn how to make runs against experienced defenders and continue to improve his finishing just a touch.

A gifted athletic with tremendous pace and athleticism, Yaro has excelled as a center back this season for the Hoyas, stepping into a starting role from day one on a defense that ranks amongst the nation’s best. He is still a raw prospect who has potential playing as a right back or even as a holding midfielder at the next level. Has shown composure with the ball at his feet but would need to improve that aspect of his game if he were to be moved into midfield.