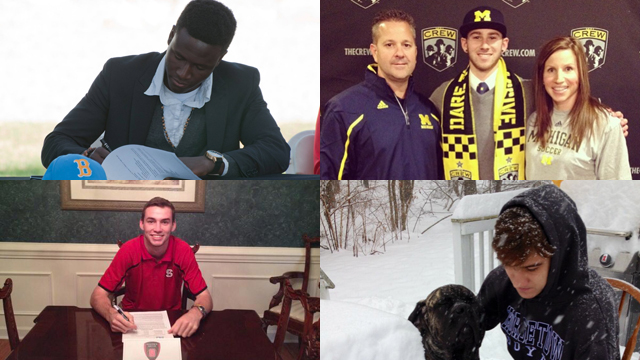 The fax machines are back to collecting dust as the initial burst of National Letters of Intent have been sent into universities across the country. While men’s soccer typically lacks in fully announcing classes until the late spring, there were some programs that jumped out to a rousing start and released part of their recruiting classes this week.

TopDrawerSoccer.com ranked the top 20 classes for the fall including transfers for men’s soccer. Take a gander at the women’s top 20 here.

For the second year in a row, the UCLA Bruins land the top ranked recruiting class. The Pac-12 giants reeled in players from near and far in assembling this class. With the return of Leo Stolz for his senior season (and no other players leaving the program early), it is hard to imagine the Bruins not contending for a national championship in 2014.

The Wolverines are one of the few classes that made a major jump in the last few weeks as the prized recruit of the class, Ahinga Selemani, made his verbal commitment late in the process. Overall, Michigan landed a selection of players that the coaching staff believes will lead the program to glory in the Big Ten Conference.