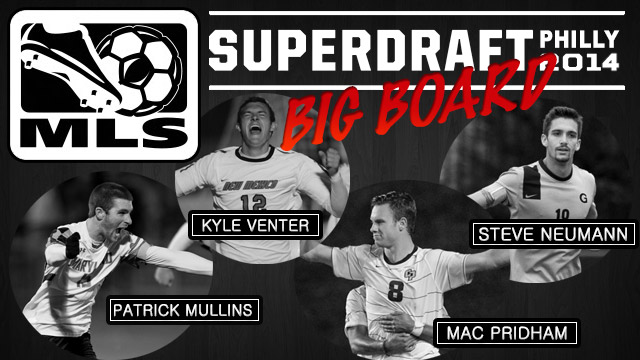 The 2014 MLS SuperDraft is now less than a month away. The season is over, leaving next month's combine the last chance for pro hopefuls to impress scouts as they look to jump start their careers at the next level.

Below is the second TopDrawerSoccer.com Big Board for the 2014 draft. Compiled by watching games, speaking with coaches and scouts around the country, it's meant as an examination of the kind of impact players will have at the MLS level. Future updates will come out prior to the draft with an expanded field of players included. Generation adidas class has still not been solified, although players like Christian Dean, Marlon Hairston, Eric Miller, Schillo Tshuma, Andre Blake, Cyle Larin and AJ Cochran are rumored to be leaving school early.

A few things to watch out for when going down the list: included in the field below are players with ties to MLS academies, who are eligible to be signed by an MLS team as a homegrown player. Those players, denoted with an asterisk next to their name, will be removed from the list after signing with a club. Harrison Shipp has been removed because he is confirmed as a Chicago Fire homegrown player, while Sebastien Ibegha is expected to try his luck in Europe.