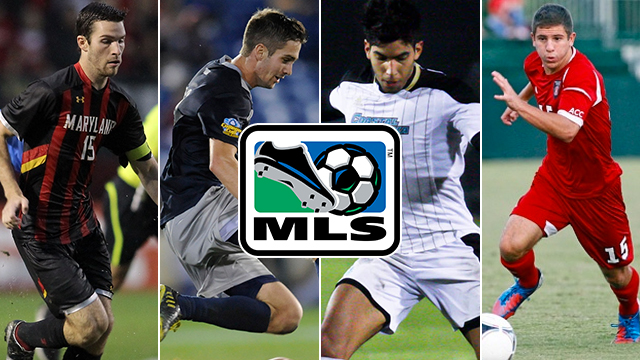 The MLS draft season is over and done with, as the college seniors selected in the previous draft are currently in various preseason camps, hoping to secure a dream of signing a pro contract.

For countless juniors, the focus is now on spring soccer and preparing for this fall. But with another MLS draft season just under a year away, now is a time to take a look at who will be competing in a similar manner a year from now.

The MAC Hermann Trophy winner returns to college after spurning an MLS Generation adidas deal. The forward, who can also play on the left wing, gets another year of college soccer to develop and hone his game ahead of what is a certain pro career. His services will be in high demand next year. 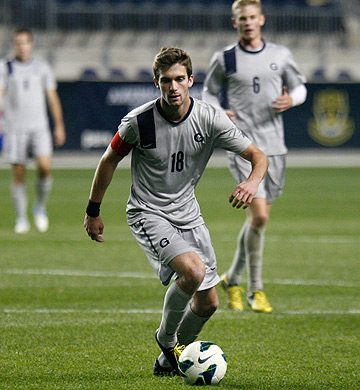 The tricky forward burst on the scene at last fall’s College Cup, bagging a hat trick while leading the Hoyas to the championship game. Another strong season is almost guaranteed to boost his stock into a top 10 draft pick.

A tall, lanky left-footed central midfielder, Ribeiro’s Brazilian citizenship is certain to come as a knock against him, but he has the skill and ability to compete in an MLS midfield next year.

The New Mexico center back has drawn the eye of MLS scouts for the past two seasons due to his play with the Lobos. Venter has continuously shown the qualities that will make him an excellent addition to any team in MLS. He reads the game well, has decent speed for 6-foot-3 defender, and is calm on the ball.

Injuries derailed Lovejoy’s 2012 season, but the versatile forward can really boost his stock with an injury-free 2013. Boasting good pace and touch, Lovejoy might settle in well as a winger in MLS.

The tricky attacker is the little brother of Real Salt Lake and former UNC midfielder Enzo, and he’s already shown a similar pedigree at the college level, bursting out of the gates last fall before a muted finish. A consistent 2013 would see him climb up draft boards quickly.

The Ghanaian midfielder may stake a claim as the best defensive midfielder in the nation, but he will need another standout season with the Gauchos to convince teams to use an international spot for his services. Baiden has been a consistent anchor for the Gauchos with his consistent tackling and smart distribution.

Quick and lanky, Diouf has driven Connecticut’s offense over the past couple of years. He’ll have to prove that he can thrive offensively after his main supplier, Carlos Alvarez, graduated last fall, as well as show that he is a complete enough forward for the pro game.

The former U.S. U17 MNT goalkeeper has done very well during his three seasons with the Huskies and will be in the draft conversation as one of the top goalkeepers from this class.

The midfielder emerged as a legitimate goal scoring threat for the Zips in 2012, leading the team in goals while proving to be the team’s most consistent offensive weapon. A lot is changing at Akron, but if Brenes continues to emerge as both a leader and goal scorer, he’s certain to catch the eye of scouts.

An attacking midfielder who stands out on the field because of his size (Ciesiulka is listed at 5-foot-4) the creative maestro helped Marquette tick last fall, and he could end up as a Homegrown signing for the Chicago Fire, who hold his rights. Should they pass, it could end up seeing Ciesiulka picked up in the SuperDraft.

MLS seems to love big, hulking target forwards, and Sherrod fits that description almost to perfection. At 6-foot-3, 185 pounds he’s a handful, but whether or not the soccer is there to land in MLS remains to be seen.

After emerging as an offensive weapon for the Demon Deacons by the end of the 2012 season, if Gimenez can maintain that momentum and build on it during the upcoming season, he is certain to attract offers from the next level.

While not the most dazzling prospect on the board, Watts just might be the best defensive midfielder available to team’s in next year’s draft. The former U17 MNT youth standout has good size and offers up a disruptive force in the middle of the park.

A neat and tidy central midfielder, Dillon did a lot of the quiet work during Georgetown’s run deep in the postseason. He’ll certainly have caught the eye of scouts who were looking at last fall’s senior class, and with another strong season would make him a slam dunk draft pick with his track record.

After missing all of the 2012 season due to an injury, Steve Birnbaum will be a hotly scouted commodity in 2013. The Golden Bears center back was one of the most highly regarded defenders heading into last season. Will he be able to reach that same level again?

Achille Campion did not get much time to show his quality in 2012 due to injuries, but when he was on the field, he changed the dynamic for the Gauchos. Assuming a fully healthy season in 2013, Campion could be looking at a 15-20-goal season and some serious consideration from MLS teams in search of a skillful target forward.

Homegrown rights for Joe Sofia may come up in question, but the general consensus seems to be he will be available for the draft. The tall center back has the all the tools needed to play at the next level.

Playing at Fairleigh Dickinson for two seasons may have kept the Costa Rican under the radar, but he shined with the Lobos last fall. He is a technically gifted midfielder who can pick out the perfect pass from anywhere on the field.

There are certain guarantees of the MLS draft, and one of them is a Creighton player will be drafted. Barnes fits the bill in 2013 (Bruno Castro will also be in the conversation). The technical two-way midfielder has shown off his attacking qualities a bit more in Omaha than he did with SMU in his previous two collegiate seasons. With Jose Gomez gone from the Jays, there will be more pressure on Barnes to produce and lead this team to a third consecutive trip to Omaha.

The Big West’s leader in assists for the past two seasons will already be on the radar for many MLS teams. Benavides is creative on the ball and difficult to dispossess. He has a keen eye on the field and been a brilliant playmaker for the Matadors lately.

It was a season to forget for the Anteaters in 2012, but there is still quality on the roster and 2013 should be the perfect opportunity to showcase a few seniors who have professional aspirations. Franco is an outside back with good skill and decent speed.

After scoring 10 goals in his freshman campaign, there were high expectations for what Castillo could accomplish in college. However, injuries and defenses designed to stop him have slowed him down over the past two seasons.

One of the most athletic goalkeepers in the country, Diaz will contend with Richey as the best goalkeeper in this class. The mark against Diaz is his size: at 6-foot-0, he will need to sharpen his positioning to belie those fears.

Fabio Pereira may have been one of the hottest players in the country during the final stretch of the 2012 season. The Brazilian made a difference in every game for the Wolverines with his smart runs and nose for the goal. International player will be the detractor, but he is a promising prospect that could slide quickly up the draft boards with another good season.