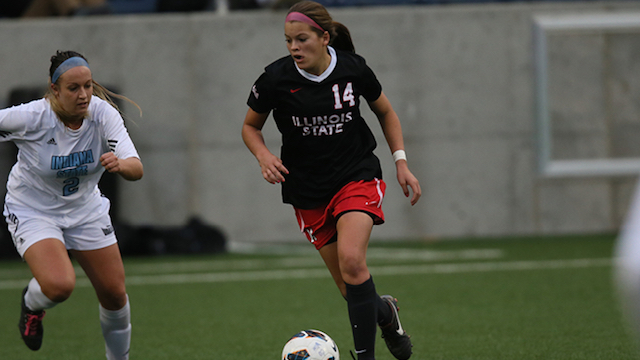 With the 2015 college soccer season kicking off this month, TDS begins its annual series of previewing every conference in Division I. The first installment takes a look at the Ohio Valley, Mountain West, and Missouri Valley conferences.

Check back throughout the month for previews from other conferences.

SIUE pulled off the double last season in the Ohio Valley Conference. Can the Cougars do it again? SIUE will be dealing with the loss of leading scorer Michelle Auer who graduated, but she was only one of two seniors on last year’s roster. If the Cougars can replace her production with sophomore Emily Grahl stepping into the limelight after scoring six goals as a freshman.

Southeast Missouri State seems like the most likely challenger to the title after finishing as co-champions in 2014. The Redhawks are replacing five seniors from last season’s squad including Breana Beine who was second on the team in points. The Redhawks do return star goalkeeper Kindra Lierz, who was the Defensive Player of the Year and Freshman of the Year last season, and top scorer Natasha Minor.

Murray State, UT Martin, and Jacksonville State are in the next bunch of contenders. Murray State looks to replace six seniors from last season’s team in Jeremy Groves’ second season in charge of the Racers. UT Martin has to replace star forward Rianna Jarrett this season after she dominating in 2014. The Jacksonville State program is buzzing with confidence after advancing to the OVC Championship game last fall. Can the Gamecocks keep that riding into 2015?

Kaitlyn Lomsnes became the first freshman to win Offensive Player of the Year in 2014. The Canadian forward looks to be the future of the conference as long as she stays healthy during her sophomore campaign.

San Diego State still looks like the team to beat though. The Aztecs return six starters from last year’s squad, but much of the loss came in the attack with the top three scorers all moving on. San Diego State will have to find off the challenges from Wyoming, New Mexico, and Colorado College in 2015.

New Mexico heads into 2015 with a new head coach as Heather Dyche takes over the program. The Lobos bring back 10 starters from last year’s squad, which should make the transition to the new coaching staff easier on the team that only lost twice in conference play in 2014.

Colorado College is looking to improve on the fourth place finish from last seaosn. The Tigers had the benefit of playing in the World University games this summer, which gave them an extra six games against good competition to improve prior to the start of the season.

Utah State is looking to contend for the crown in 2015 as well. The Aggies have to replace Mountain West Conference Defender of the Year Taryn Rose. A strong recruiting class for Utah State should help fill the void. With only two seniors on the squad, the Aggies are one of the younger teams in the Mountain West this season.

Coaches of the Year: Illinois State

Illinois State won the league and the conference tournament in 2014. The Redbirds were the most dominant team in the conference by far. The 2015 season will be quite a bit different for Illinois State. Star player Rachel Tejada is gone and there is a massive hole for the program to fill. Junior college transfer Brianne Richards looks to be a promising option after her success with Iowa Western Community College, but replacing the four-time conference player of the year is never an easy task. On top of that change, Eric Golz enters his first season as the head coach with the Redbirds after Drew Roff departed to take over Purdue.

The rest of the conference is hoping the shuffle with Illinois State will open the door for a new champion. Evansville came closest to knocking off the Redbirds last season. The Aces return nine starters from that squad for another crack at the crown in 2015. Krista McKendree’s side only let in 12 goals last season and could improve on that total this fall.

The rest of the conference is also hunting for that top spot. Drake returns seven key players from last year’s squad, which finished third in the conference. Missouri State brought in a recruiting class that the coaching staff said was the best they’ve ever compiled. All of the movement should set up for an exciting season in the MVC.