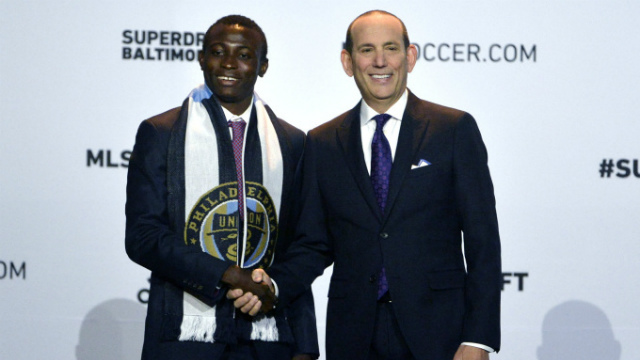 BALTIMORE — As usual, the MLS Draft played out in predictably unpredictable fashion.

The first and fourth overall picks in the draft were swapped, as 41 players came off the board.

And while the performances of each respective team won’t be felt to a few years down the road, below is a knee-jerk reaction of Thursday’s winners and losers.

Philadelphia Union: Heading into Thursday, with picks at third and sixth overall, the Union was already in a good position. When the Fire decide to go with Jack Harrison at No. 1 overall, Joshua Yaro fell into Philly’s laps. Jim Curtin and the rest of the technical staff reached slightly for hometown right back Keegan Rosenberry – who was the best right back on the draft board. Toss in Fabian Herbers, and the Philadelphia roster looks a lot better.

Seattle Sounders: After dropping out of the first round via a trade, the Sounders looked like they were in store for a quiet day. Not quite. As the wait for Jordan Morris goes on, Seattle did manage to add Tony Alfaro, a consensus sleeper center back who played at Cal State Dominguez Hills, and Zachary Mathers, a midfielder who enjoyed a quietly steady career at Duke.

New England Revolution: Anytime a team can come away with a potential starter with the tenth overall pick, it’s a good day. And that’s what New England snagged with versatile outside back Jordan McCrary. Toss in the second round gamble of picking up Wake Forest’s Michael Gamble, and things could work out very well for Jay Heaps and company.

D.C. United: It’s not often a team can directly address a need in the draft. By grabbing Julian Buescher and Paul Clowes in the first and second rounds, United has two candidates in line to add depth to central midfield. While both have to prove that they can do a job there in MLS, D.C. is in a better place heading into training camp with Perry Kitchen eyeing up a move to Europe.

Colorado Rapids: Caveat before burying the Rapids – a lot of the chatter suggests that Colorado is lining up a move for U.S. international Alejandro Bedoya, trading draft picks for a spot in the allocation order. Essentially ditching the draft altogether, the one first round pick they traded down for was underwhelming in the form of Cincinnati midfielder Emmanuel Appiah. VCU’s Dennis Castillo could end up being the better of the two players when all is said and done. If they don't come away with something via the allocation trade with the Fire, Colorado's draft makes no sense.

FC Dallas: With Andrew Tarbell their target, when he came off the board in the top 10, FCD was left to look elsewhere for a goalkeeper. They went with Ryan Herman, which is obviously not a bad move in itself, though he likely would’ve been available at a later point in the draft. Timo Pitter is a quality option in the second round, though there’s little doubting that FCD could’ve made more from its trip to Baltimore.

San Jose Earthquakes: It’s true that the Earthquakes needed a third goalkeeper. However, the team could also use and outside back or two, and with Jordan McCrary still on the board, passing here and opting to grab Tarbell was something of a head scratcher. Of course, it is a luxury to have a Generation adidas signee as a backup GK, though it’s curious what to make of this move considering the Quakes have the homegrown rights to one of college soccer’s best goalkeepers, James Marcinkowski. In the second round, going with Patrick Hodan has the potential to redeem their draft, though he has plenty of questions to answer at the next level as well.

Portland Timbers: Drafting from a position of strength as MLS Cup champs, the Timbers don’t really have glaring holes to address. Ben Polk and Neco Brett both feel like they are attempts at replacing the soon-to-be departing Rodney Wallace, and neither are quite up there. Brett in particular felt from a stretch, even if the value of the No. 40 pick isn't that significant.