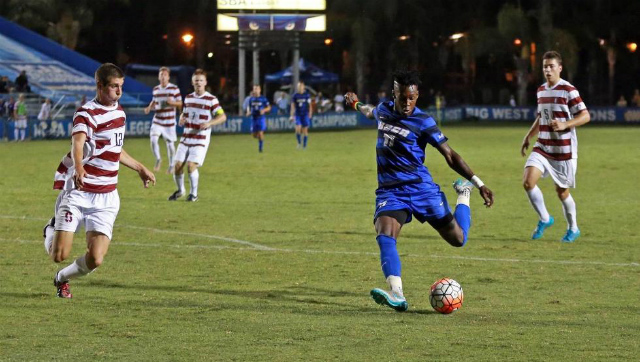 Both the college soccer and MLS campaigns are winding down as November nears. With that, comes the offseason buzz, which includes the MLS draft.

Below is a look at 13 possible candidates (either underclassmen or U.S. U17 MNT players) who should get a look from the league's Generation adidas program as the January draft looms.

M Amar Sejdic, Maryland, Freshman
The Terps boast a slew of talented freshman, and Sejdic is one of the brightest talents of the first year players. A composed and technical midfielder, Sejdic spent a season at the RSL-AZ Academy and could end up being eligible for a homegrown contract. But if he doesn't, it's easy to spot his quality on the field, as he has the look of a future professional.

M Jackson Yueill, UCLA, Freshman
An experienced youth national team player and central midfielder, Yueill has been one of the few bright spots during UCLA’s mediocre campaign. Another promising midfielder who can hold his own in the middle of the park, Yueill is a smooth passer with a good finishing touch when he gets forward.

F Fabian Herbers, Creighton, Junior
On the cusp of posting both double-digit goals and assists this season (12 g, 9 a), Herbers is one of many reasons for the Bluejays perfect start to the 2015 campaign. The Ahaus, Germany native turned 22 this fall, and has a skillset that would be ready to jump into the MLS next season in an attacking role either up front or from a wide position.

M Richie Laryea, Akron, Sophomore
Another product of the Sigma FC Academy in the Toronto area, Laryea has blossomed this year thanks to a change in tactical approach. At times deployed as a false 9 up front, Laryea has demonstrated a dynamic attacking ability that few players can match in the country. He has nine goals and four assists this year, and while he may end up playing more of a box-to-box role, his breakout this season isn’t going unnoticed.

M Jack Harrison, Wake Forest, Freshman
The former Manchester United youth player is arguably the nation’s top freshman and has helped transform Wake into a national title favorite. A hard-working winger with a cannon of a left foot and the ability to beat defenders off the dribble, Harrison’s is one of the most exciting players in the country to watch. Harrison, who earned Gatorade High School Player of the Year honors, is second in Division I with 11 assists, and has added six goals.

F Jason Wright, Rutgers, Sophomore
Knocking on the door of the nation’s goal-scoring lead, Wright picked up where he left off last fall for the Scarlet Knights, tied for second in the NCAA with 13 goals. The speedy Jamaican isn’t the prototypical Caribbean forward, listed at 5-foot-7, though he’s got the pace and athleticism that MLS teams desire. He could play up front as a second forward or possibly on the wing.

F Abu Danladi, UCLA, Sophomore
Injuries have held Danladi back at times this season, and would be a cause for slight concern when surveying his professional hopes. However, the forward is as dynamic as ever, and has embraced his role as both a scorer and a creator this season for the downtrodden Bruins.

F Geoffrey Acheampong, UC Santa Barbara, Freshman
Former club teammates before Danladi went to college last fall, Acheampong has given Harrison a run for his money as one of the best first year players during the current college campaign. Another left-footed attacking piece, Acheampong’s eight assist illustrate his chance-creating ability in the final third.

D Joshua Yaro, Georgetown, Junior
A slam dunk inclusion to the list, Yaro overcame an early season leg injury and continues to excel as one of the best players in the nation. Reportedly set to graduate from Georgetown after this semester, he’ll be a top five pick at minimum if he elects to leave with a year of eligibility left and sign with MLS.

F Jeremy Ebobisse, Duke, Sophomore
In terms of raw talent, few can match Ebobisse’s ceiling as a forward threat. With a physical frame capable of absorbing challenges from MLS defenders, enough speed and a good scoring touch in front of goal, he’s a bit of a project but could end up as something special. He reportedly recently received his U.S. citizenship, making him an even more enticing option for teams looking to stock up on young, prodigious attacking talent.

M Jake Rozhansky, Virginia, Sophomore
Despite his lack of playing time this season -- due to a nagging injury -- Rozhansky is another exciting talent that oozes potential. Dynamic is a good word that comes to mind whenever Rozhansky touches the ball, as he can make surging runs through the midfield to break down the opposition. His ideal position in Major League Soccer is a bit of a question, as teams tend to shy away from developing or providing opportunities for young, attack-minded No. 10 types.

F Orrin McKinze Gaines, Lonestar SC
A U.S. U17 residency member and one of the last cuts from the World Cup roster, in some ways that boosts Gaines’ stock as he prepares to begin his college career next fall at UCLA. Gaines, a wide midfielder/forward, is a talented and promising player that an astute MLS team could make a push for when surveying the draft options for January.

M Eric Calvillo, Real So Cal
Looking for a future top No. 6? The Real So Cal product is a prime candidate to make a splash at the next level, despite his erratic deployment at the recent U17 World Cup. Like Gaines, Calvillo is someone who needs the right environment in order to succeed, ideally a place that would care about his development.