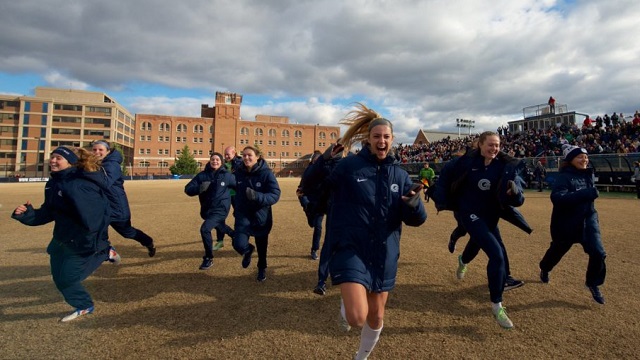 If it wasn’t already obvious, the conference’s preseason poll all but confirmed how favored Georgetown is to continue its manic run through the Big East. The Hoyas snapped up every single available first-place vote. After their first ever Big East championship in 2016 and a 20-win season that bottomed out in their first ever appearance in the College Cup. It’ll take something special to catch Georgetown this year.

The Hoyas return a frightening nucleus. Midfielder Rachel Corboz is bouncing off an 18-assist junior season and should be in the discussion as the country’s best player. Perhaps even more importantly, there’s a load of depth returning. The Hoyas bring back three of their top five scorers from last year, and a good chunk of the defense that shut out four teams in the NCAA tourney also returns. Senior defender Elizabeth Wenger and junior goalkeeper Arielle Schectman should continue to help the Hoyas post shutout after shutout. Expectations are as high as they’ve ever been on the Hilltop this year.

DePaul’s renaissance in recent years has been something to see, and they should finish in the conference’s top three again this year. The Blue Demons secured a share of their second Big East regular season crown in three years last season thanks in large part to Alexa Ben, one of the country’s most exciting midfielders. Ben’s senior season is highly anticipated, and the return of senior midfield batterymate Lucy Edwards alongside volume scorer Franny Cerny gives DePaul a good shot of qualifying for the NCAA tourney.

Marquette was perhaps the league’s pleasant surprise in 2016 after a run to the Big East tournament final netted the Golden Eagles a return to the NCAA tournament. They remain the most likely challenger in a clear Big Three alongside the Hoyas and Blue Demons. Marquette has a couple key losses to contend with, but the dangerous Carrie Madden returns to anchor the front line. Goalkeeper Maddy Henry was the team’s breakout star last year as a freshman, and she’ll need another big year to get Marquette back to the dance.

The league’s midsection last year was a jumble. Creighton, Butler, Providence and St. John’s all finished within shouting distance of one another, and games between them inevitably came down to the wire.

St. John’s provided the biggest scare to the league’s breakaway Big Three last season, and for good reason. The Red Storm made the Big East tourney semifinals for the fourth consecutive year on the back of a quality 13-point season from preseason All-Big East forward Shea Connors. The simultaneous return of senior midfield heartbeat Allie Moar gives St. John’s an experienced nucleus with which to launch another double digit-wins season. The big question is how they replace goalkeeper Diana Poulin, who’s been the conference’s best netminder the last three years.

Providence and Butler were right there. The Friars notched a respectable five conference wins last year and racked up double digit wins for the second straight season. That’ll be a tough act to follow, but there are enough returning pieces to believe Providence has a legitimate chance to make a Big East tourney run. More will be asked of Casey Estey (2g, 6a) after last season, and they’ll have to find a replacement for star keeper Kristyn Shea.

Much of what Butler does depends on how the Bulldogs can replace what they lost. That goes double for the yawning gap left by the departure of Serina Kashimoto, who combined for 15 goals and 13 assists over her final two seasons at Butler. Endeavoring not to take a step back without her vision is a tough ask, but not impossible. A heavier scoring burden will be placed on Paige Monaghan, and defender Shannon McDevitt also made the preseason All-Big East team. The broader questions are in the midfield.

Creighton’s suffering through some of the same questions at the start of the year. Lauren Sullivan was the Bluejays’ leading scorer for four consecutive years, and her departure leaves an important hole to fill. The midfield appears to be in good shape with the return of leader Taryn Jakubowski, but Creighton needs to find another full-time top scorer.

The bottom three from last year – Villanova, Xavier and Seton Hall – all have more ground to cover this season than their peers. Chris McLain took over at Villanova in December after serving as an assistant at Ohio State, and his building project might take a couple years to fully take root. Xavier is in the same boot. Chris Lie moved over from his gig as an assistant at Cincinnati in the offseason, and he has his work ahead of him after a one-win conference season. Meanwhile, the pressure’s on for Seton Hall coach Rick Stainton, whose Pirates are 10-35-8 since he took over the program in 2014. The Pirates desperately need a turnaround with just two conference wins in their last 27 league tilts.