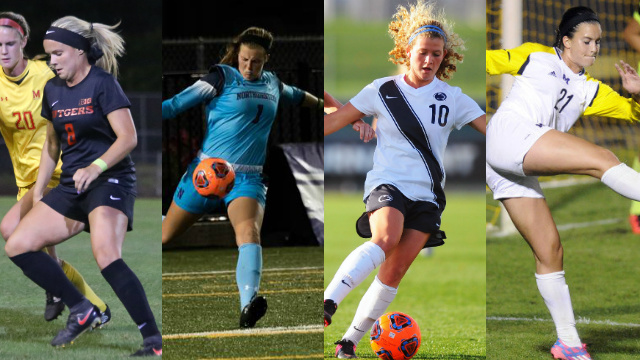 The big story in the Big Ten this fall focuses on returning players, just as much as it does on the departing standouts. Five players are back for Penn State after redshirting for last year’s Under-20 World Cup, making the Nittany Lions firm favorites. Maddie Elliston, Rose Chandler, Ellie Jean, Emily Ogle and Kaleigh Riehl all sat out the 2016 campaign, and return to action to give the team one of the best defenses in the nation. Sprinkle them in amongst the likes of Frannie Crouse, Elizabeth Ball and Brittany Basinger, add a dash of freshmen standouts in Frankie Tagliaferri and Kerry Abello, and Penn State has the look of national title contenders.

They aren’t the only program getting a big name back, as Rutgers starting goalkeeper Casey Murphy was also part of the U20 squad. Mounting a Big Ten title challenge is going to be a tough ask, though the Scarlet Knights do bring back Big Ten Freshman of the Year Nicole Whitley and All-Freshman performer Taylor Aylmer.

One of Northwestern or Michigan does seem to be in position to mount a challenge to Penn State. The former returns a number of key pieces from its stingy defense, as goalkeeper Lauren Clem will look to duplicate her seemingly-impenetrable 2016 form, and First Team All Big Ten defender Kayla Sharples provides cover in front of her. Jump-starting the attack would go a long way to keep the team at the top for a second year in a row, and sophomore forward Maddy Lucas is a prime candidate to do that.

The Wolverines have a young but talented group that will need to mesh quickly in order to sustain a challenge. Junior forward Reilly Martin is one of the experienced returning players, and between her and Ani Sarkisian, will feature significantly in the final third. Eleven freshmen are rostered by Michigan, and the likes of goalkeeper Hillary Beall and midfielder Sarah Stratigakis should factor into the title race.

Outside of that quartet of teams, several other programs have big gaps to fill. Wisconsin witnessed the departure of U.S. Women’s National Team midfielder Rose Lavelle to the NWSL, making senior goalkeeper Caitlyn Clem’s experience and leadership crucial. The sensational senior core at Minnesota (Rashida Beal, Josee Stiever, Tarah Hobbs, Simone Kolander) are all gone. Returning is defender Nikki Albert, a member of the All-Freshman Team.

After qualifying to the Big Ten Tournament as the No. 8 seed a year ago, Indiana has a young group that features 11 freshmen, though leading scorer Mykayla Brown and top creator Meghan Scott are both among the returning players. Nebraska re-tools in the wake of several key departures, including Jaycie Johnson. Midfielder Haley Hanson, forward Meg Brandt and defender Sinclaire Miramontez all return after earning All-Big Ten honors in 2016.

The six teams that finished outside last fall’s Big Ten tournament field will no doubt be putting in the work to try and climb the standings.  Senior forward Jamie Cheslik will look to finish her career at Michigan State on top and boost an offense that score just 19 goals last year. Ohio State's looking to rebuild an attack that lost Nichelle Prince and Lindsey Agnew after earning an NCAA Tournament bid last year, despite missing out on the conference postseason.

Purdue and Maryland are all working to improve under relatively new coaching staffs. The Boilermakers, led by Drew Roff, lost Maddy Williams last fall and never recovered; the goal-scorer is now fit and helped her side to a 4-1 record in the spring season. The Terps should be improved in Ray Leone’s second season, but remain a young team that will have its share of ups and downs. Fifteen freshmen are on the roster ahead of the new season, though leading scorers Chelsea Jackson and Jarena Harmon are back.

Life after Jannelle Flaws was a struggle in the final third for Illinois last season, as the attack mustered just 16 goals. There’s a large group of seniors and juniors that will look to rectify that, including Kara Marbury, a forward that missed a significant chunk of 2016 with an injury.

Another team eying a quick bounce back, Iowa has the experience, featuring seven seniors on the roster, the program’s most since 2014. Sophomore midfielder Natalie Winters was one of the stories of last season, emerging as a candidate for the U.S. U20 WNT in 2018, while also landing on the All-Freshman Team.