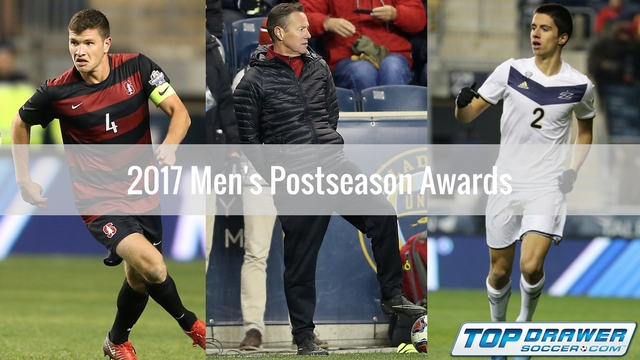 The 2017 men’s Division I college season ended the same way the past two seasons concluded: with Stanford sitting on top.

It’s no surprise to see the Cardinal ever-present in the 2017 TopDrawerSoccer.com Postseason awards as a result.

That starts with this year’s Player of the Year award, as center back Tomas Hilliard-Arce captures this year’s award. Eclipsing a talented field that includes Jon Bakero (Wake Forest), Chris Mueller (Wisconsin) and Cameron Lindley (Wake Forest), Hilliard-Arce’s college career ended with a third straight national title. The central defender, who also earned the Pac-12’s Defender of the Year honor, led a defense that conceded nine goals in 23 games. He scored four times, including the game-winning tally in the NCAA Quarterfinal against Wake Forest, though his ability to read the game and make crucial interventions separates himself as the best player in college soccer.

Another central defender picks up Freshman of the Year honors. Akron defender Joao Moutinho earned the nod, pipping a tight race that featured American talent like Mason Toye (Indiana), Brandon Servania (Wake Forest) and Manny Perez (NC State). An international recruit from Portugal, Moutinho was stellar after winning a starting job as a center back. Forming a partnership with Daniel Strachan, Moutinho played 2,160 minutes, starting 24 games for the semifinalists. He also chipped in three goals and five assists, playing four games in the midfield. The 6-foot, 160-pound defender’s ability to cope with the size and physicality of the best attackers in college soccer was notable.

Securing the first-ever men’s Coach of the Year award is Stanford’s Jeremy Gunn. Now a three-time national champion, Gunn orchestrated yet another title triumph, finishing the 2017 season with a 19-2-2 record. Gunn and the rest of the coaching staff had the game plan to beat three of the best teams in college soccer during the last three games of the NCAA Tournament, besting Wake Forest, Akron and Indiana – three loaded programs.

Check out the complete TopDrawerSoccer.com Postseason Awards below for the Men’s Division I season.