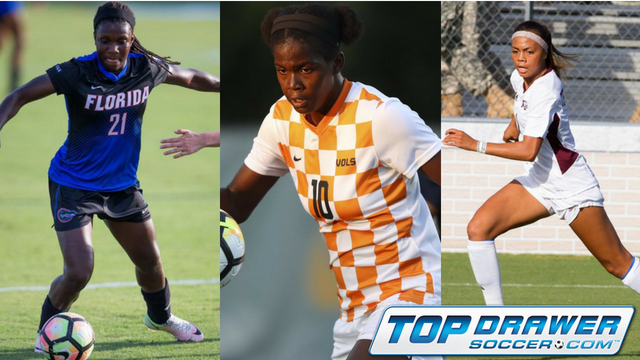 It was another banner year for South Carolina, which rode its usual defensive resilience and Savannah McCaskill’s excellence in the final third to the College Cup. Replacing that production in the final third will be critical to South Carolina’s ability to maintain success in the new season. Grace Fisk, a leader at the back, is in France with England for the Under-20 World Cup, though that shouldn’t impact her availability beyond the first couple weeks of the season. Luciana Zullo and Elexa Bahr are two candidates to help supplant McCaskill’s departure, though that will be a big focus for the team in 2017.

There’s plenty of potential in College Station this season for Texas A&M to go on a run. The team is fearsome up front, with Ally Watt’s dynamic runs in behind and Emily Bates’ prowess in and around the penalty area. Addie McCain’s role should open up with the graduation of Mikaela Harvey. Defensively, Jimena Lopez is playing for Mexico at the U20 World Cup, though Briana Alston is one of a handful of players capable of excelling at the back.

Losing the all-around excellence of Gabby Seiler is a hole to fill for Florida, though the Gators bring back All-SEC talents Deanne Rose and Parker Roberts. Along with an SEC tournament title, they came one game shy of the College Cup last year. Senior defender Rachelle Smith leads the team at the back once again, as they seek to repeat the successes of 2017.

Two big pieces of last year’s success are gone for Vanderbilt: defender Stephanie Amack and Simone Charley. Filling those voids are keys to the upcoming campaign. Myra Konte emerged as an important piece as a freshman, and her presence at the back is vital. Vandy scored just three more goals than they conceded in 2017 and improving on that mark should help boost them up the table.

Khadija Shaw burst onto the scene for Tennessee, helping the Vols to a solid season after transferring to the program. She’ll be a known commodity this season, so how her and the team adapt to new looks are going to be critical. Tennessee is far from a one-women team. Katie Cousins and Maya Neal provide strength in the spine, and Erin Gilroy will have confidence after earning a spot on the U.S. U20 World Cup team.

Both of Auburn’s First-Team All-SEC winners graduated (Caroline Bado and Kristen Dodson), leaving the Tigers in need of a reshuffle for the new season. Taylor Troutman is among the pack of returning defenders, and she’ll be important in protecting the talented Sarah Le Beau in goal. An uptick in production from Brianne Folds could help to counterbalance the loss of Dodson’s production.

While Alabama loses significant talent from last year’s NCAA Tournament appearance, there are big contributors coming back. That includes defender Kayla Mouton, who led the team in minutes played, and 2017’s leading scorer Abbie Boswell is back after scoring eight goals. Also returning is Emma Welch, a Second-Team All-SEC performer.

Despite a mid-table finish in conference play, Arkansas produced an impressive campaign in 2017, albeit bowing out in the first round to Clemson in the NCAA Tournament. If you’re looking for a team that can improve significantly in 2018, the Razorbacks are up there, with Parker Goins, Stefani Doyle and Taylor Malham all returning. Replacing Jessi Hartzler’s presence and leadership are going to be a question they’ll have to answer, but the possibilities are endless.

The prolific scoring tandem of CeCe Kizer and Channing Foster – the pair combined for 28 goals – are both back, lifting Mississippi to hopes of improving on a 3-5-2 mark in the SEC. They did run up the score on a pair of weak opponents last season, winning two games by a combined 16-0. The non-conference schedule is a bit more ambitious, so if the Rebels can handle that, another NCAA appearance could be within reach.

A four-game losing streak at the earlier stage of the 2017 season sapped a lot of Missouri’s momentum and they were unable to overcome that by the end of the campaign. It’s clear that improving defensively is crucial to any chances of a quick bounce back in the upcoming season after conceding 44 times. Sarah Luebbert keeps things moving offensively, though if she's up to the task and the team improves at the back, expect to see a big step forward.

Eleven new freshmen joined Kentucky this season, a program that finished the 2017 campaign with a field player starting in goal. It’s no surprise then to see that three of the incomers are goalkeepers, as the team continues its rebuild. Sophomore midfielder Miranda Jimenez was one of the bright spots last year and can help the program take a step forward in the upcoming campaign.

Mississippi State continues its rebuild with 14 newcomers to the roster. That’s not to say that 2017 was a disaster, as the team finished above .500 though managed just a pair of wins in conference play. Mallory Eubanks was drafted and won’t spearhead the attack any more, though the team got significant production from returnees Brooke McKee and MaKayla Waldner. If one or two of the newcomers can hit the ground running, it’ll go a long way.

A talented team on paper, LSU struggled to translate non-conference success into anything significant in league play a year ago. Four English youth internationals dot the roster, and Alex Thomas has flourished as both a forward and outside back. Making the SEC tournament field must be the first step for the Tigers, as they look to get into the conversation for postseason soccer.

It can only (hopefully) get better for Georgia, after failing to win a single game in SEC play a year ago. Since 2015, the program has a 10-36-2 mark in conference games. Eleven freshmen bolster the roster, while rising sophomores Mollie Belisle and Reagan Glisson look to be part of an improved campaign.