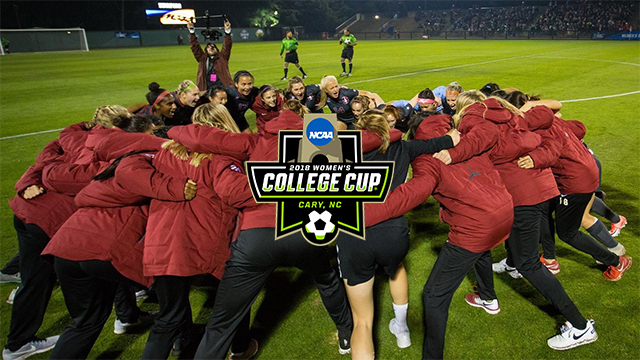 The final weekend of the women’s Division I college season is here, with the College Cup set for Cary, N.C. Preview both games below, with games set to be broadcast on ESPNU.

Two College Cup programs from 2016 are back, with the Tar Heels looking to win their first national championship since 2012. There’s no doubt that the combination of pedigree and home-field advantage hands the edge to North Carolina(w) but count Georgetown(w) out at your own risk. The Big East champions haven’t lost a game this season and for good reason. The combination of a lockdown defense, solid goalkeeping and difference-makers in the final third will give North Carolina’s back line plenty to think about. In truth, set pieces could prove to be the decider in this one, as the two sides aren’t going to give each other any space in the run of play. Kyra Carusa’s championship experience is going to be crucial for Georgetown, as the Stanford transfer’s been one of the best in the country this season; if senior forward Caitlin Farrell can find the back of the net at least once it could mean good things for Georgetown.

MORE: Pro Prospects to Watch at the College Cup

On the flip side, the Tar Heels continue to get goals from all comers after Alessia Russo went down with injury earlier in the season. Julia Ashley’s play at right back is criminally underrated, and if the Tar Heels come away from this weekend as national champs, she’ll need to put in two more outstanding shifts. Emily Fox patrols the left flank from her outside back spot and is likely to play a role in keeping tabs on Farrell. Senior Dorian Bailey’s come up with a big goal or two, cleaning up shots in front of goal or finding freedom on set pieces.

Kicking off second is a battle between the 2014 and 2017 national champions, as the Seminoles return to the College Cup for the first time since losing to Duke in 2015. This is a rematch of the 2014 national semifinal, as the Seminoles held off the Cardinal en route to their national title. A big X-Factor in this matchup is what Deyna Castellanos can manage to do. The enigmatic striker can float in and out of games and if she can find any space to test Stanford goalkeeper Alison Jahansouz it bodes well for the ACC tournament champs. The midfield battle is going to be of particular interest and importance in dictating the outcome of this one. Boasting talented freshman Yujie Zhao, Costa Rican international Gloriana Villalobos

While anything can happen in 90 minutes, Stanford enters this weekend as the clear favorite. Without a loss since August 25, 2017, the Cardinal sent Florida State home last year from the tournament. Adding even more intrigue to this one is that head coach Paul Ratcliffe hinted the Tierna Davidson could return to see some minutes after getting injured earlier this year. Even if it’s in a substitute role to protect the lead, if Davidson is fit and able to contribute it makes Stanford all the more difficult to beat. Without Davidson, Stanford’s defense remains difficult to crack with Samantha Hiatt, Alana Cook and Naomi Girma setting up a formidable barrier to break down. Davidson wasn’t the only star to suffer a serious injury this season, as Sophia Smith’s freshman campaign was cut short after 13 games. When you have Catarina Macario already on the roster and arguably the nation’s best striker, and Jordan DiBiasi as the midfield supply line. If Macario’s having an off day, Civana Kuhlmann pops up in big moments.