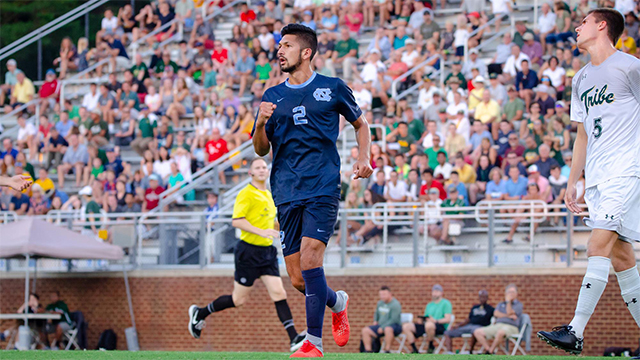 A new era begins in the Atlantic Coast Conference, with the launch of the ACC Network aiming to provide more money in schools’ coffers and more exposure for Olympic sports.

Often trundled about as the premier league in men’s college soccer, 2018 was anything but when it came to the postseason. Despite sending nine teams to the NCAA Tournament, none made it to the College Cup, with Notre Dame’s quarterfinal run the furthest.

There is ample talent remaining, of course, which should yield an improve postseason return later this year.

Despite being one of the most dominant programs not named Stanford the past five years, national championship success has eluded Bobby Muuss and Wake Forest. For this to change in 2019, the team has to replace Omar Fernandez in the final third, Sam Raben at the back and Brad Dunwell in midfield, among others. There’s the talent and experience of Bruno Lapa to pull the strings and a strong recruiting class coming in that should certainly help.

New head coach John Michael Hayden was hired in the wake of Ken Lolla’s surprise resignation. That provides continuity for a group that showed flashes of talent – including winning the ACC tournament – but was bumped out of the postseason in the second round by Michigan State. Lamine Conte anchors the team’s spine, and if transfer Emil Elveroth can score against ACC defenses, it’ll provide a massive lift.

David Loera headlines the returning talent from last fall’s squad, which bowed out in the second round of the NCAA tournament at the hands of future champions Maryland. Several other players are back, including Gabriel Machado and David Norris, while the team’s injected a Top 10 recruiting class. Depending on the team’s willingness to attack, a run at an ACC crown could be within reach.

Struggles on the road anchored BC last season, which fashioned a 1-6-2 mark away from home. That’s simply got to get better in order for the Eagles to finish above .500 for the first time since 2015. Midfielder Kristofer Konradsson earned Preseason All-ACC honors, while Amos Shapiro-Thompson is a sneaky good pickup after he spent a gap year abroad.

Despite a somewhat difficult season last fall, the Orange snuck into the NCAA tournament. They fell at the hands of Akron, however, and will look to improve their fortunes in both league and postseason play. A lot of that could come down to the performance of Ryan Raposo, who already looks sharp after a three-assist performance in an exhibition game this week.

Last fall marked the first season where the Tigers missed out on a spot in the NCAAs since 2012, a run that included several deep runs and a College Cup appearance. A run of six defeats from seven proved costly, as the Tigers struggled to score goals when they needed. Things need to improve at both ends of the pitch, as the defense was good but not great, making senior defenders Tanner Dieterich and Malick Mbaye critical to a bounce back season.

Opening a sparkling new stadium, the Tar Heels have to be dreaming of a deep run this season, particularly as nearby Cary hosts the College Cup. The team is stacked in midfield, led by Mauricio Pineda, while freshman Blake Malone should start right away at the back. Goal-scoring could dictate just how good the Tar Heels are, as they should be able to keep the ball and defend well.

A string of solid recruiting classes have the Blue Devils riding back-to-back tournament appearances after missing out four years in a row. The late drop out of Cameron Duke from this year’s signing class is a bit of a blow, but there are still eight seniors back to lead the team. That includes Daniele Proch, the team’s leading scorer. Issa Rayyan’s decision to leave school after a year hurts the attack, which is going to be the focal point – if they can get enough goals, postseason play should be within reach.

The Fighting Irish enter their second season under head coach Chad Riley. He led his alma mater to within a game of the College Cup, despite not a ton of star power. They did lose a strong senior class, leaving an interesting dynamic for returnees such as Felicien Dumas and Ian Aschieris to step up and raise the level.

A suffocating defense led the Cavaliers to another strong record a year ago, and it could be more of the same once again. There are holes to fill at the back, as Aboubacar Keita signed a Homegrown deal and Prosper Figbe graduated. But there’s a suggestion that the team could improve a bit going forward, as Daryl Dike and Daniel Steedman enter their sophomore seasons, while Nathaniel Crofts and Joe Bell provide leadership and experience.

A fourth straight NCAA tournament spot is available for the Hokies, which have quietly been a solid and steady team during that stretch. Kristofer Strickler bagged 10 goals and four assists, and is back for his junior season. Can they climb into the ACC elite this season? That remains to be seen, but with two wins from two preseason games, another impressive season seems likely.

Rebuilding in the ACC is no small feat, and year four under head coach Jay Vidovich begins with perhaps the best roster yet. If not for finishing at 8-10, an at-large bid might’ve been within Pitt’s grasp last fall, so that should be target No. 1 for Pitt. A handful of marquee ACC wins are needed of course, but the roster and talent is there. Another strong incoming class boosts a roster that returns seven players the saw more than 1,000 minutes last year, while Edward Kizza’s breakout season saw him score 15 goals. Will it all finally add up for a spot in the tournament?