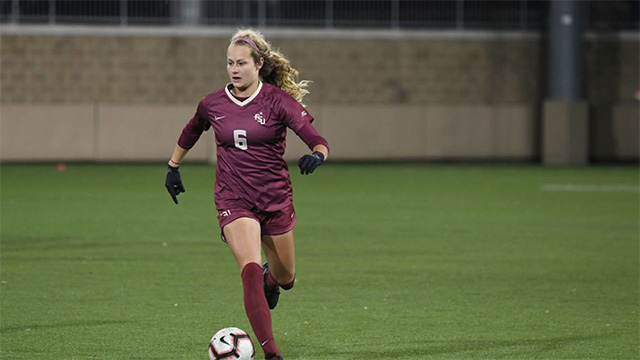 Regarded as one of, if not the best, conferences in women’s Division I soccer, the Atlantic Coast Conference enters a new era in 2019. The ACC Digital Network launches in partnership with ESPN, and will work in similar capacity to the already established SEC Network.

Its impact on this season is minimal, of course, as programs continue preparations for the 2019 campaign. If there’s any doubt to the quality of the ACC, its worth remembering as the new season begins, that the 2018 national champions Florida State, finished in seventh place last fall.

It’s now been six seasons since the Tar Heels hoisted the trophy, last fall’s title game loss the closest they’ve come since last winning it all in 2012. There’s plenty of talent on the roster once again, whether it’s midfielder Brianna Pinto, forward Alessia Russo or defender Emily Fox. If they can stay healthy and if the top recruiting class lives up to its billing, another College Cup run wouldn't be surprising.

All programs face the task of replacing talent, but the Blue Devils lost a quartet of seniors including Kayla McCoy and Taylor Racioppi. Not to mention that, Associate Head Coach Erwin van Bennekoom left to take the head coaching gig at Indiana. Duke still has the kind of talent to be competitive and finish near top of the ACC, of course. Midfielder Ella Stevens should link up well with freshman midfielder Sophie Jones. Finding a goal-scorer that can solve ACC defenses after Racioppi and McCoy graduated is massive, as those two combined for 21 of the team’s 41 goals in 2018.

Looking for a title contender both nationally and in the conference, Virginia is an easy answer. They have tremendous talent back in all parts of the park, from goalkeeper Laurel Ivory, defenders Zoe Morse, Courtney Petersen and Phoebe McClernon, to go with midfielder Taryn Torres. Add in rising second-years Alexa Spaanstra and Rebecca Jarrett on the flanks, and this could be one of Steve Swanson’s most complete teams over the past few years.

The Eagles head into the campaign with a new head coach in Jason Lowe, but plenty of familiar faces. Fifteen players from last year’s roster are back, although ACC Midfielder of the Year Sam Coffey transferred to Penn State. Replacing her production – 12 goals and 14 assists – will be a massive challenge, but Olivia Vaughn has proven to score against high-level competition. Defender Gianna Mitchell anchors the team’s back line, so there are the pieces here for the Eagles to be top-half finishers once again.

The pieces are back in place for the Cardinals this fall to improve on a fifth-place finish in 2018. Brooklynn Rivers, Maisie Whitsett and Emina Ekic combined for 24 of the team’s 37 goals, and all three are back for more. Improving defensively could end up being the big difference maker for the program.

Replacing Sam Staab on the back line is going to be crucial for Clemson’s hopes of an improved performance in 2019, although plenty of quality remains. Goalkeeper Sandy MacIver enters her senior season, while Mariana Speckmaier provides the spearhead up front. Staab's contribution at both ends of the pitch can't be overlooked, as she contributed 11 assists with her left-footed set piece deliveries.

The national champions bring plenty back from the title-winning squad, especially in the starting lineup. Aside from Natalia Kuikka, the bulk of the starters from the title game return. Depth did take a hit, so it’ll boil down to how the newcomers and reserves step up. Even so, with players like Yujie Zhao and Jaelin Howell anchoring the midfielder and Malia Berkeley steady at the back, the Seminoles should remain among the elite.

There’s little doubting the quality of the goalkeeping in the ACC, with Mandy McGlynn entering her fourth and final season between the posts in Blacksburg. Emily Gray was excellent during her freshman season, scoring twice and setting up six goals. The Hokies have some talent, but need a bit more goal-scoring punch in order to improve from last season.

After posting a 9-9-2 mark, the Demon Deacons secured an at-large bid, once again showing the power of the conference. They backed that up with a pair of NCAA tournament wins, before losing a close 1-0 battle in the Sweet 16 to Penn State. Replacing the production and quality of Bayley Feist is going to be crucial to any improvement, with Estelle Laurier one of the returning contenders to fill that role. Outside of Laurier, there are intriguing attacking pieces Abby McNamara, Hannah Betford and freshman Grace Jale, who comes with New Zealand youth national team experience.

The Fighting Irish have done their due diligence in the recruiting game, with a Top 10 recruiting class on paper. That is no guarantee of success, and the team has to replace attacking players like Karin Muya and Jennifer Westendorf. They’ll need a big impact from that freshman class to provide a compliment to Brianna Martinez, one of their standout performers in 2018.

Despite finishing 11th in the overall standings, the Wolfpack did enough for their RPI to get an at-large bid to last fall's NCAA tournament. Speedster Tziarra King’s been one of the conference’s most overlooked players to this point as she enters her senior season, while the roster receives an international boost from Ricci Walkling and Kristina Schuster.

The 2018 season finished on a high for the Hurricanes, which held on for a 1-0 overtime win against Florida State in their final game. It’s not as simple as picking up from that as the program looks to move forward under second-year head coach Sarah Barnes. Icelandic forward Gudrun Haralz is among the key returning players, after she led the team with seven goals.

Heading into year two of the Pitt rebuild, head coach Randy Waldrum has made significant roster changes, bringing in 17 freshmen and four transfers. There are plenty of players with interesting pedigree, so the question for this season if it’s enough to win games on a regular basis in a tough conference.

Like Pitt, it’s the start of a re-tooling process this season, as Nicky Adams moved to the ACC school from Rice. Kate Hostage, Sydney Brackett and midfielder Georgia Allen return after seeing significant minutes last season as the Orange look to claw their way to a win or two in ACC play.