For most of the season, the Maryland Terrapins have been running away with the men's college soccer regular season conference title in the ACC.

And while the Terps are the top seed – and regular season conference champions – in this week’s conference tournament, they went winless in their last two games of the ACC season and questions are sure to start cropping up after last Thursday’s 4-2 loss against Wake Forest. 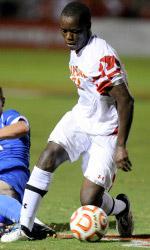 Of course, given the talent level of the conference, assuming that Maryland would go undefeated in one of the nation’s most challenging leads is quite difficult. There’s North Carolina, bolstered by the nation’s top defense, to contend with, while the Demon Deacons have showed the ability to win in big games.

That’s of course without mentioning other programs like Boston College, Virginia, and even Duke, which could threaten despite not putting together the best regular season.

Here’s a closer look at how the tournament breaks down:

Wake Forest: Some may say that this is only a two horse race, but if the stars align, and the Demon Deacons ride the momentum of a regular season closing win against the Terps, there’s an outside chance Wake lifts the tourney championships in the finale. While the team is a bit young – freshmen Jalen Robinson, Collin Martin and Michael Gamble have all started at points in the season – the experience provided by Sean Okoli, Jared Watts and Luca Gimenez will be invaluable over the course of the week.

Maryland: Is Maryland going through a late season swoon similar to 2011? It hasn’t been the same drop off as a year ago, but the Terps are winless in their last two games against Clemson and Wake Forest and could be missing senior center back London Woodberry after his red card last week.

However, the offensive firepower that the Terps boast should be enough to at least carry them to the semifinal. With Patrick Mullins, Schillo Tshuma and John Stertzer, the scoring options are many, not to mention the loaded bench. While both possible quarterfinal opponents, NC State and Virginia Tech, gave the Terps problems earlier in the year, it could all come together over this week if they learn their lessons from the past.

North Carolina: It hasn’t always been the prettiest, but there’s no doubting how good the Tar Heel defense has been. Center backs Jonathan Campbell and Boyd Okwuonu have been lights out in front of goalkeeper Scott Goodwin, conceding only four goals all season while scoring 30. That defense not only makes them contenders for the tournament this weekend, but also to repeat as NCAA champs.

Up front, players like Andy Craven, Danny Garcia and Martin Murphy have all stepped up while Rob Lovejoy missed most of the season with an injury. However, with Lovejoy back, that could be the X-factor that tilts the chances in favor of Carolina.

Boston College: A lot of BC’s chances over the course of this week comes down to the health of forward Charlie Rugg. Injuries plagued the striker’s final season in college, and after picking up a hamstring injury on October 19, if he can’t go, the Eagles chances of picking up an upset win dwindle.

Despite that, the Eagles don’t have the most difficult quarterfinal matchup against Clemson, and a win there books a trip to the semifinals – where anything can happen.

Virginia: The new nickname for the Cavaliers should be Will Bates and the underclassmen. Inexperienced – yet very, very good – talent surrounds the senior forward this year, and if Bates can catch fire over the week, then he could lead the Cavs and certainly shock people. Freshmen like Marcus Salandy-Defour, Darius Miles and Zachary Carroll have all been immense this year for UVA.

F Robbie Lovejoy, North Carolina: After missing all but the final five games of the season, the dynamic attacker has four goals already in 2012 and his presence back in the lineup changes not just the ACC landscape, but the national title discussion as well. With the aforementioned strong defense, Lovejoy’s ability to get in behind defense and make things difficult will play a huge role in the coming week.

MF Jared Watts, Wake Forest: On a team that starts three or four freshmen per game, the experience of a player like Watts is important at this crucial stage of the season, as one mistake, one lapse, can prove to be the difference between going home and advancing.

MF John Stertzer, Maryland: Before the season, a lot had been made of the three seniors expected to lead Maryland back to the top. And Stertzer, who has been steady throughout the year, is a pivotal figure as the Terps look to bring it all together over the next month and make a run not just at an ACC title, but at the College Cup as well.

F Will Bates, Virginia: UVA’s opening round opponent Wake Forest won the regular season matchup 4-1, giving the Cavaliers the chance for revenge. Bates, the focal point of the offense, is critical to the team’s success both in the quarterfinal and the hopeful games the team would play after the opening game on the road.

MF Kyle Bekker, Boston College: As mentioned, no Charlie Rugg would be a huge blow to the Eagles, who made a run to the tournament final a year ago. That leaves a void for Bekker to fill. The playmaker hasn’t put up the numbers, but he has the ability to set up teammates and help the team cope with the possible absence of Rugg.